The BABY-SITTERS CLUB (“BSC”) is an organized-crime enterprise that rose to power in the wake of the major Mafia busts of the mid-1980s. Its members terrorize families and businesses in Stoneybrook, Connecticut, via EXTORTION, LABOR RACKETEERING, and KIDNAPPING activities. The Club aggressively forces its babysitting services on parents and demands “protection money” in exchange for their children’s safe return.

The BSC is a nearly impenetrable organization (Fig. 1). To become a “made” babysitter, one must be of babysitting “heritage” (i.e., members must demonstrate their natural babysitting instincts) in addition to possessing a shrewd criminal mind. 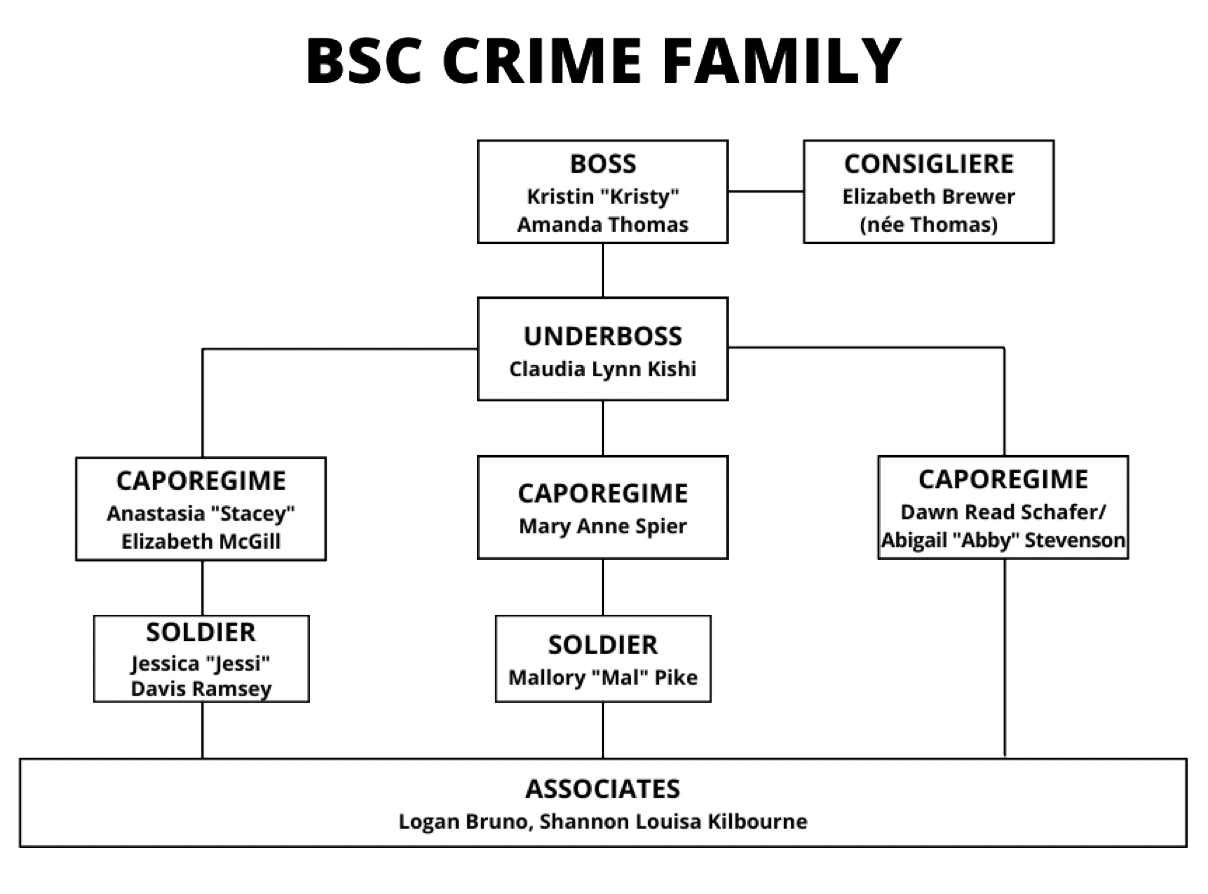 To permanently dismantle the BSC Crime Family, the FBI must target babysitters at every level, with an emphasis on neutralizing the tyranny of KRISTIN AMANDA THOMAS.

Ms. Thomas’s “great idea” spurred the creation of the BSC, and she rules with an iron fist. Her reputation as a vindictive and ruthless leader precedes her, as does her bossiness. The citizens of Stoneybrook rarely cross her for fear of physical retribution from her roving team of softball-bat-wielding enforcers (known locally as “KRISTY’S KRUSHERS”). People are particularly terrified of JACKIE RODOWSKY, a Krusher whose high body count earned him the nickname “THE WALKING DISASTER.”

ANASTASIA ELIZABETH MCGILL controls the pocketbooks of the operation and collects weekly “moola-shmoola” at BSC meetings. Ms. McGill aids her fellow babysitters in TAX EVASION by cooking the books and failing to declare their childcare income.

After conducting round-the-clock surveillance on CLAUDIA LYNN KISHI, the FBI has identified her residence as the BSC’s official meeting spot. Attempts to bug the home have failed thus far, as agents are unable to sneak past Ms. Kishi’s older sister JANINE KISHI, who rarely leaves her room.

The younger Ms. Kishi purchases tremendous quantities of “junk food” at a frequency suggesting that solo consumption would be unsustainable for a person of her age and size. The “Doritos,” “Mallomars,” “licorice whips,” and miscellaneous wrapped “snack cakes” are likely part of a DRUG TRAFFICKING scheme. After smuggling illegal substances, contraband, and paraphernalia into her drug den via junk food packaging and hollowed-out Nancy Drew hardcover books, Ms. Kishi sells them for a hefty profit so she can afford her expensive art supplies. (The FBI has not ruled out ART FORGERY as a possible charge.)

ABIGAIL STEVENSON replaced Capo DAWN READ SCHAFER, who split off to form the WE ♥️ KIDS CLUB, a rival Babysitting Crime Family on the West Coast. Mafia history dictates that war in “Sitterland” is imminent.

Soldiers MALLORY PIKE and JESSICA DAVIS RAMSEY weaponize their cherubic disposition to travel inconspicuously through the streets of Stoneybrook. These two “wisegals” perform the organization’s dirty work to keep the higher-ups’ hands clean.

All levels of the BSC are suspected of INFILTRATING A LEGITIMATE BUSINESS via Stoneybrook’s great Italian mainstay, PIZZA EXPRESS. The restaurant supplies the Club with fresh tomato pies for their “Pizza Toast” (Fig. 2)—a nefarious initiation ritual in which the “made” BSC members tap their individual slices of pizza with the other babysitters’ slices, mimicking a celebratory “cheers.” 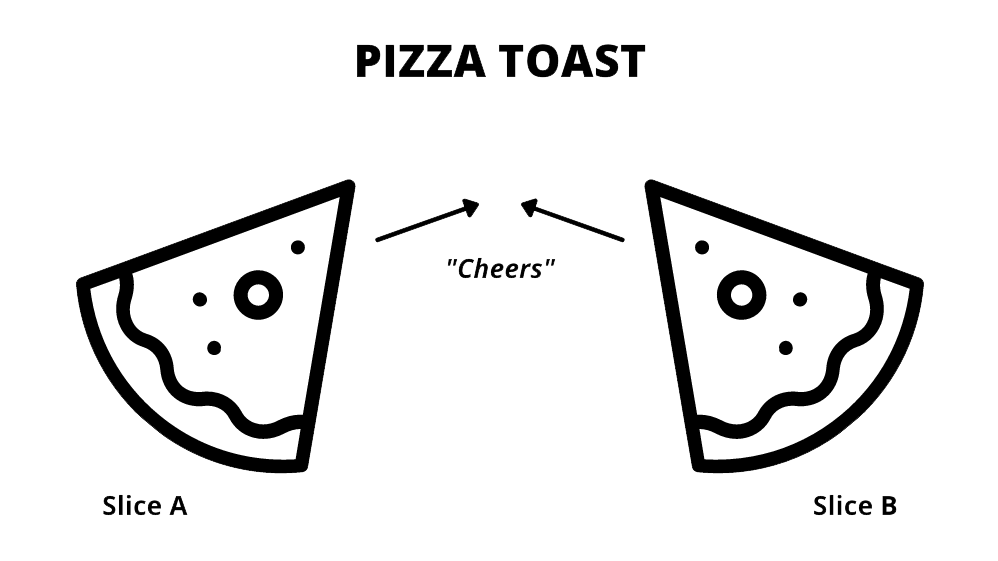 Pizza Express also donates pizzas for the BSC’s occasional “fundraisers,” which are likely a cover for the Club’s MONEY LAUNDERING SCHEMES. One such event raised “donations” for the BSC’s babysitting clients’ penpals, whose school burned down (one of many mysterious fires associated with the Club).

Due to the statistically improbable frequency of fires occurring on and around the Club’s property, members, and affiliates, the BSC is suspected of multiple counts of ARSON (Fig. 3) for the purposes of INSURANCE FRAUD and/or EXTORTION.

The Baby-Sitters Club is the future of organized crime in the United States and a grave threat to its citizens and law enforcement. Taking into account the babysitters’ anticipated workloads when they enter ninth grade, crime in Stoneybrook is still projected to increase exponentially unless every facet of the BSC infrastructure is totally eradicated.

Officers should arrest these hardened criminal masterminds on a weekday between seven a.m. and three p.m. when they are gathered under one roof at Stoneybrook Middle School.