Hello, friends! This page is the galley portal for McSweeney’s, where members of the media can download advance reader copies of our forthcoming and most recent releases. Note that these are uncorrected and should not be quoted without confirmation from us. To learn more or to arrange interviews with our authors, please be in touch with the publicist noted. For password access, please send your name and the organization you’re writing for to: eric@mcsweeneys.net.

If you’re a book buyer and have any questions about distribution about these or other future titles, please contact danweiss@mcsweeneys.net 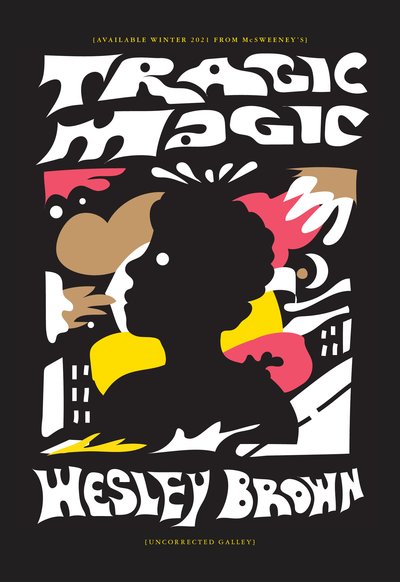 Tragic Magic is the story of Melvin Ellington, a.k.a. Mouth, a black, twenty-something, ex-college radical who has just been released from a five-year prison stretch after being a conscientious objector to the Vietnam War. Brown structures this first-person tale around Ellington’s first day on the outside. Although hungry for freedom and desperate for female companionship, Ellington is haunted by a past that drives him to make sense of those choices leading up to this day. Through a filmic series of flashbacks the novel revisits Ellington’s prison experiences, where he is forced to play the unwilling patsy to the predatorial Chilly and the callow pupil of the not-so-predatorial Hardknocks; then dips further back to Ellington’s college days where again he takes second stage to the hypnotic militarism of the Black Pantheresque Theo, whose antiwar politics incite the impressionable narrator to oppose his parents and to choose imprisonment over conscription; and finally back to his earliest high school days where we meet in Otis the presumed archetype of Ellington’s “tragic magic” relationships with magnetic but dangerous avatars of black masculinity in crisis. But the effect of the novel cannot be conveyed through plot recapitulation alone, for its style is perhaps even more provoking than its subject. Originally published in 1978, and edited by Toni Morrison during her time at Random House, this Of the Diaspora edition of Tragic Magic features a new introduction by author Wesley Brown. 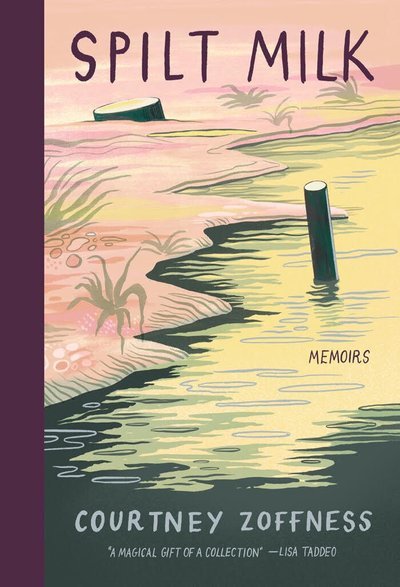 What role does a mother play in raising thoughtful, generous children? In her literary debut, internationally award-winning writer Courtney Zoffness considers what we inherit from generations past—biologically, culturally, spiritually—and what we pass on to our children. Spilt Milk is an intimate, bracing, and beautiful exploration of vulnerability and culpability. Zoffness relives her childhood anxiety disorder as she witnesses it manifest in her firstborn; endures brazen sexual advances by a student in her class; grapples with the implications of her young son’s cop obsession; and challenges her Jewish faith. Where is the line between privacy and secrecy? How do the stories we tell inform who we become? These powerful, dynamic essays herald a vital new voice. 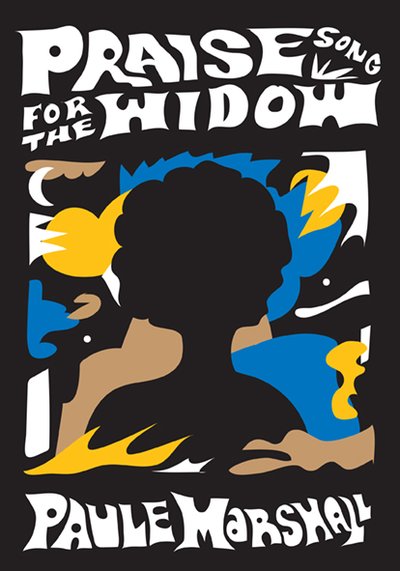 Avey Johnson-a black, middle-aged, middle-class widow given to hats, gloves, and pearls-has long since put behind her the Harlem of her childhood. Then on a cruise to the Caribbean with two friends, inspired by a troubling dream, she senses her life beginning to unravel-and in a panic packs her bag in the middle of the night and abandons her friends at the next port of call. The unexpected and beautiful adventure that follows provides Avey with the links to the culture and history she has so long disavowed. Originally published in 1983, Praise Song for the Widow was a recipient of the Before Columbus Foundation American Book Award, and is presented here in a beautiful new hardcover edition. 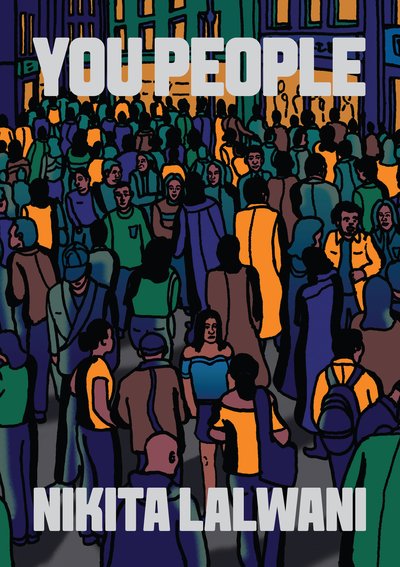 From the outside, Pizzeria Vesuvio seems just like any other pizza place in West London: a buzzy, cheerful Italian spot on a street where cooks from Sri Lanka rub shoulders with waitstaff from Spain, Georgia, Wales, Poland and more. But upstairs, on the battered leather sofas, lives are being altered drastically and often illegally, as money, legal aid, safe passage and hope are dealt out under the table to those deemed worthy. Set in the opening years of the 21st century, against the backdrop of the Sri Lankan civil war and its outpouring of refugees to Britain, You People asks the big questions at a time of bewildering flux. What price do we put on life, on freedom, and the right to love in an age defined by seismic political change? 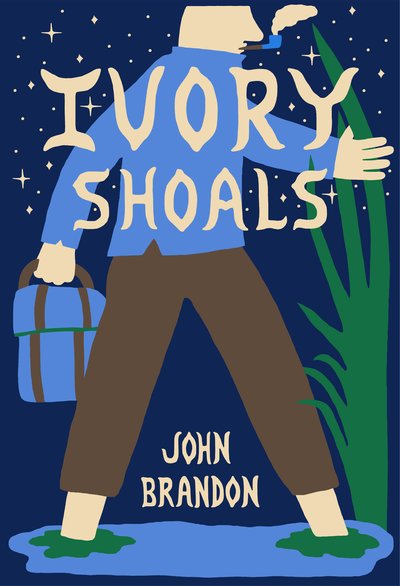 In the tradition of Mark Twain and Cormac McCarthy comes this distinctly American, pulse-quickening epic from the acclaimed author of Citrus County and Arkansas.

Twelve-year-old Gussie Dwyer—audacious, resilient, determined to adhere to the morals his mother instilled in him—undertakes to trek across the sumptuous yet perilous peninsula of post-Civil War Florida in search of his father, a man who has no idea of his son’s existence. Gussie’s journey sees him cross paths with hardened Floridians of every stripe, from the brave and noble to a bevy of cutthroat villains, none worse than his amoral shark of a half brother. Will he survive his quest, and at what cost?

Rich in deadpan humor as well as visceral details that illuminate a diverse cast of characters, the novel uncovers deep truths about family and self-determination as the reader tracks Gussie’s dangerous odyssey out of childhood. Ivory Shoals is an unforgettable story from a contemporary master. 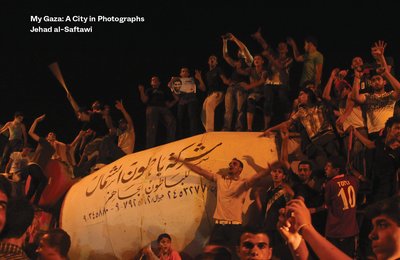 My Gaza offers a startling perspective on contemporary Gaza. Photographer Jehad al-Saftawi documents his life there up until his escape in 2016. Al Saftawi’s eye is drawn to moments of humanity and tenderness that redefine this place, beyond propaganda, beyond prevailing narratives. Through vivid images and captions, al-Saftawi exposes a place that cannot withstand further escalation. A gun to the head. An interrogation. A family in strife. Urgent and resolute, My Gaza is the first book of its kind: photos of present-day Gaza by a Gazan journalist. 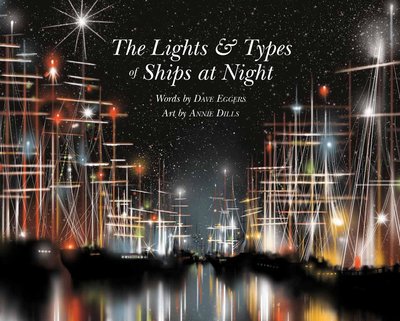 You may have heard of ships. You may have also heard of the sea and the night. Bud did you realize there’s nothing more beautiful than a ship and its lights on the sea at night? In warm and witty prose, this books asks the reader to consider the splendor of glowing lights cast by ships on a shimmering waterway. Meet a trawler, a paddlewheel ferryboat, an icebreaker, and something called a RoRo—all richly illustrated to illuminate the gorgeous explosion of color that only happens where boats and water and lights converge. 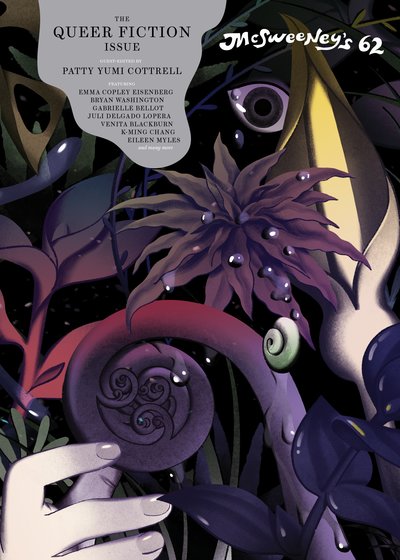 Guest-edited by Patty Yumi Cottrell, and filled to a surfeit with letters, stories, and dazzling full-color comics and art, you’ll be jealously hoarding this collection for decades to come. 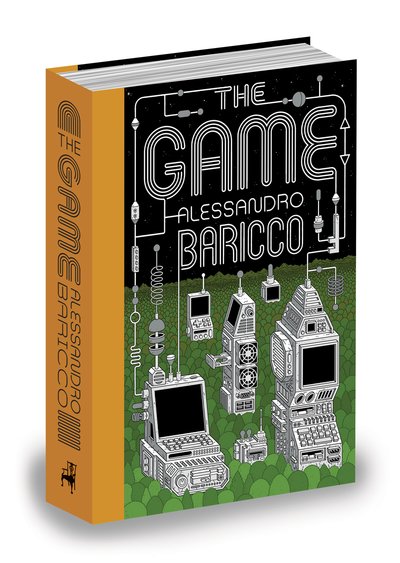 Fourteen years after the publication of his cult classic I Barbari, Baricco returns in The Game to the topic of change, in a journey that maps out the transformations that the digital revolution has wrought upon the landscape of human experience. From Space Invaders to the PlayStation, from Windows 95 to the conundrum of artificial intelligence, Baricco traces the trajectory of a revolution in the way we think, feel, and communicate – and seeks to discover what it might actually mean for our future. 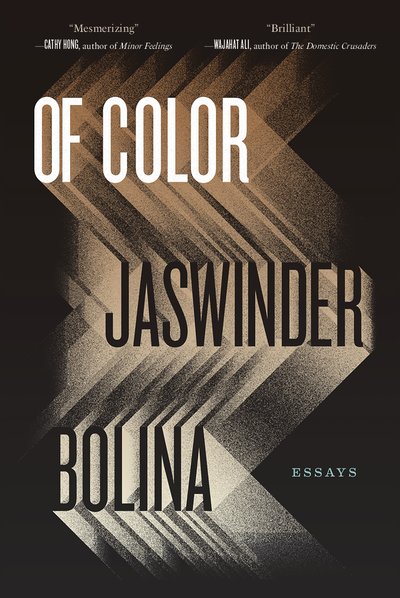 In his debut essay collection, award-winning poet Jaswinder Bolina dissects “how race,” as he puts it, “becomes metaphysical”: the cumulative toll of the microaggressions and macro-pressures lurking in the academic market, on the literary circuit, in the dating pool, and on the sidewalks of any given U.S. city. Training a keenly thoughtful lens on questions about immigration and assimilation and class, about the political utility of art, and about what it means to belong to a language and a nation that brand you as other, Of Color is a bold, expansive, and finally optimistic diagnosis of present-day America. 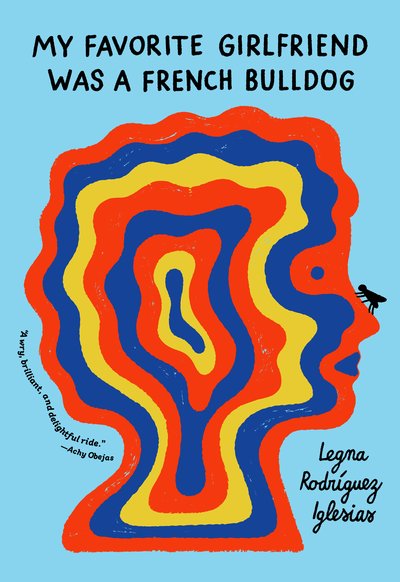 My Favorite Ex-Girlfriend was a French Bulldog is a novel told in fifteen stories, linked by the same protagonist, our narrator, who—in her own voice and channeling the voices of others—creates an unsparing, multigenerational portrait of her native Cuba. Though she feels suffocated by the island and decides to leave, hers is not just a political novel—nor just a queer novel, an immigrant novel, a feminist novel—but a deeply existential one, in which mortality, corporeality, bureaucracy, emotional and physical violence, and the American Dream define the long journey of our narrator and her beloved pet dog, who gives the book both its title and its unforgettable ending. In its daring style and structure—both playful and profound, youthful and mature – and its frank discussion of political and sexual identity, My Favorite Ex-Girlfriend was a French Bulldog marks the emergence of an original and essential new voice. 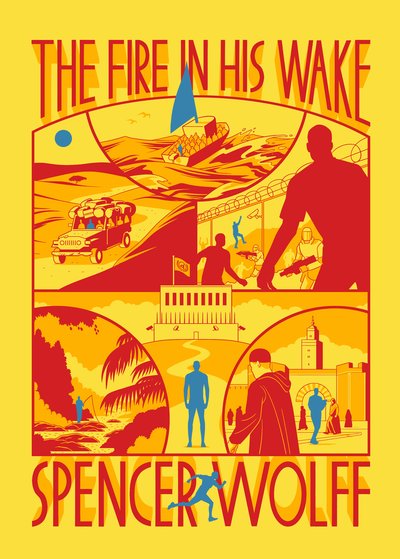 The Fire in His Wake, Spencer Wolff’s debut novel, recounts the journey of Arès, a Congolese refugee left for dead in the wake of ethnic violence. Part sweeping portrait of life in the Maghreb, part epic tale of hope and perseverance, Arès’ fate, like the fate of millions, sends him on a kinetic flight across northern Africa with Europe as his goal. He reaches Rabat, Morocco, where he binds himself to a desperate community of exiles, and meets Simon, a young, UN worker, whose journey is altogether different but no less fraught. While Arès struggles to find a way forward and come to terms with his past, Simon gradually awakens to the bitter contradictions of his work at the UN. Their challenges, told in Wolff’s clear, lively prose, carry the reader from the inner halls of the UN to the hazardous realities faced by the refugees in the streets and on their risky crossings to Europe. When a storm gathers at the UNHCR, and the ghosts of the Congo’s violence unexpectedly surface in Rabat, the two men find themselves on a collision course, setting the stage for the novel’s unforgettable and genre-busting ending. 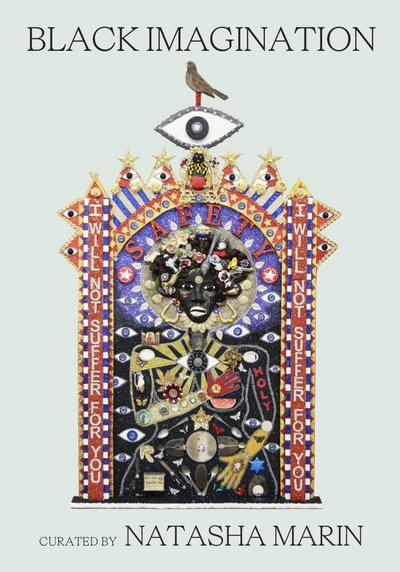 “Close your eyes—make the white gaze disappear.” What is it like to be black and joyful, without submitting to the white gaze? This question, and its answer, is at the core of Black Imagination, a dynamic collection collection curated by artist and poet Natasha Marin. Born from a series of exhibitions and fueled by the power of social media (#blackimagination), the collection includes work from a range of voices who offer up powerful individual visions of happiness and safety, rituals and healing. Black Imagination presents an opportunity to understand the joy of blackness without the lens of whiteness. 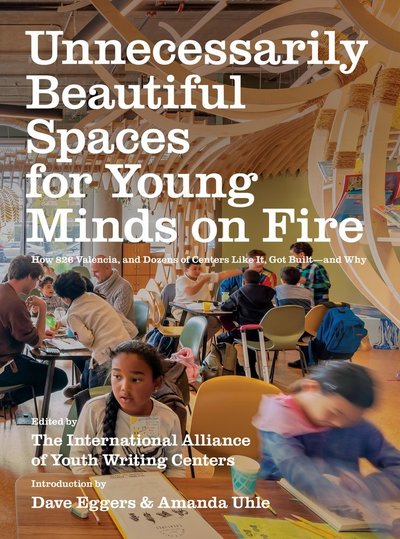 
Every kid in the world needs a safe, welcoming, and even weird place to write. That’s the theory behind 826 Valencia, a writing and tutoring center started in 2002. That center, with a pirate-themed storefront, inspired similar centers around the world, from New York to Melbourne. Across 280 pages and hundreds of beautiful full-color photos, this lavish, oversized book takes you behind the scenes of how these centers started, in the hopes of inspiring more communities, schools, and libraries around the world to build their own centers for young writers. Unnecessarily Beautiful Spaces for Young Minds on Fire is a joyous and wildly creative book, filled with stunning photos of the world’s most welcoming and wild spaces for young minds. 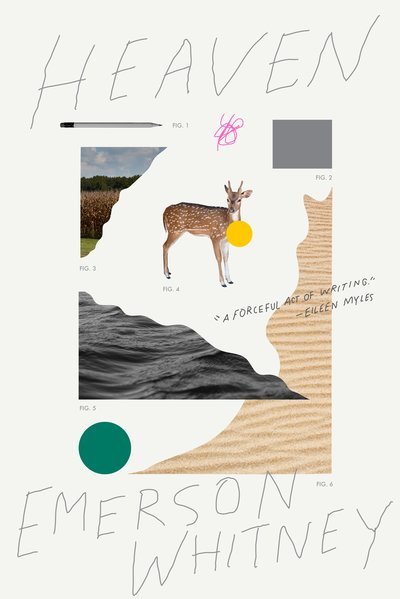 Emerson Whitney writes, “Really, I can’t explain myself without making a mess.” What follows is that mess—electrifying, gorgeous, defiant.

At Heaven’s center, Whitney seeks to understand their relationship to their mother and grandmother, those first windows into womanhood and all its consequences. Whitney retraces a roving youth in deeply observant, psychedelic prose—all the while folding in the work of thinkers like Judith Butler, Donna Haraway, and C. Riley Snorton—to engage transness and the breathing, morphing nature of selfhood.

An expansive examination of what makes us up, Heaven wonders what role our childhood plays in who we are. Can we escape the discussion of causality? Is the story of our body just ours? With extraordinary emotional force, Whitney sways between theory and memory in order to explore these brazen questions and write this unforgettable book.

McSweeney’s is now publishing Illustoria, the beloved art and storytelling magazine for children and their grownups. This thrice-annual publication celebrates visual storytelling, makers, and DIY culture through stories, art, comics, interviews, crafts, and activities. This high-quality publication is geared toward readers ages 6-12 and the young at heart.