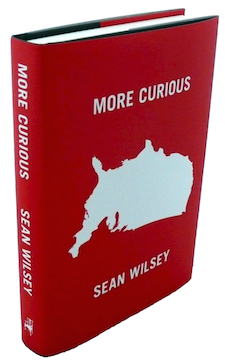 As Michiko Kakutani said of Sean Wilsey’s More Curious in today’s New York Times, “Mr. Wilsey can write in a range of emotional octaves, moving from the comic to the philosophical to the streetwise with ease, while putting body language on his prose to give the reader an almost synesthetic sense of what he’s saying.” In More Curious Sean Wilsey travels across the U.S., from the launchpad at Cape Canaveral, to the isolated artists’ enclave of Marfa, Texas, to the boardrooms and ballrooms of post–9/11 New York City. Wherever he is, Wilsey captures his surroundings with the precision of a photographer and the raw grace of a skateboarder (he’s an amateur practitioner of both arts). These essays—some of which have been expanded and updated from pieces originally published in Vanity Fair, GQ, McSweeney’s, and elsewhere, and some of which appear here for the first time—comprise nearly fifteen years of Wilsey’s most vital work on the glory and the misery, the beauty and absurdity of contemporary America.

Today, in honor of the publication of More Curious, we are pleased to bring you an excerpt from one of the superb essays in the collection. When, by the end of the excerpt, you’re overcome with a rapturous hunger for more, journey over to the McSweeney’s store site and squash that disquieting feeling by ordering the book, or visit your local independent bookstore to pick up a copy. While we’re suggesting things, perhaps you should consider signing up for the most economical deal around—the McSweeney’s Book Release Club, and if you sign up now, your subscription will start with More Curious (and Mr. Gwyn).

My traveling companions were a dog named Charlie Chaplin and an architect named Michael Meredith. Michael and I became friends in Marfa—where the minimalist artist Donald Judd exiled himself in the 1970s from the “harsh and glib” New York art scene—in 2000, when he was in town designing a house for Judd’s longtime companion, Marianne Stockebrand, and my wife Daphne and I were guests of an arts foundation, each working on a book. Michael left for a teaching job back east, and Daphne and I stayed on—that’s when I saw the truck, in front of the post office: boxy, banged up, covered in sky-blue house paint, half-smashed windshield a lattice of stars and linear cracks, like a flag. A Mexican man in his sixties walked outside with his mail (smoking a cigar, wearing a cowboy hat) and drove it away. I biked around town till I found it parked out by the cemetery, around the corner from the beauty parlor. Jesse Santisteban, the owner, said I could take a closer look. The doors had handmade wooden armrests, and the seat belts were canvas and chain link. There was orange shag on the floorboards. He opened the hood and showed me the spot in the engine compartment where he’d signed it like an artist. I asked if he’d ever thought of selling. He said, “Never thought of selling.” Then he told me he had kidney stones and needed an operation.

After going to the courthouse and making it official he handed over the keys (on a green plastic fob that said laugh, live, love and be happy!) and warned, “Don’t take it over forty-five or it’ll throw a rod.” A friend later explained, “That’s a polite way of saying the engine will explode.”

Daphne and I also acquired a puppy around the same time, Charlie, whom we took back to New York a couple months later. I left the truck, which Jesse agreed to look after. I didn’t think much about it till two years later, when I got a letter saying my insurance policy had been canceled because I had “neither possession nor control” of the vehicle. I called Jesse, who said all was well. Well, sort of well.

There was maybe some seeping brake fluid. He mumbled something that sounded like “Butterwutchdat.” And I decided I had to drive it back to New York. Michael agreed to meet me in Marfa.

Charlie (now quite big) and I flew back in order to assess/drive this piece-of-folk-art-cum-death-trap, which had never gone farther than the nearby town of Pecos, across the country, seeing America in a way almost nobody gets, or wants, to see it.

I booked the trip and coordinated schedules and then I got the news: the woman who’d raised me was dead.

As Geri’s youngest son, Verne, put it, “Mother looked upon you like you were one of hers and my brothers and I have always followed the mention of your name with something like, ‘Yeah, that our Lil invisible brother.’” But after a humiliating conversation with American Airlines on the topic of “bereavement fares,” my ineligibility for one, and the nonrefundability of my ticket to Far West Texas, I decided to stay invisible. I’d dodge everyone else ’s grief and mourn—or avoid mourning—alone. In slow motion. Behind the wheel.

And the route I’d planned would take me right past Geri’s grave.

At nine a.m. on a Wednesday, I honked the horn in front of a small adobe, where Michael had spent the night with some friends. It was a clear sound in the dry air. Michael burst out of the house. He looked harried. Renderings for the place he ’d designed for Stockebrand had appeared in Architecture magazine and attracted a Texan I’ll call Don Harris, who’d written Michael and asked if he would come to San Antonio to discuss the construction of “a house with no walls.” We were headed there first.

On the phone we’d planned out the trip as follows: always take back roads, eat only in non-chains, never hurry, spend a day in San Antonio with Mr. Harris so Michael could design another house (potentially his first to be built), write songs to perform at an open mike in Nashville. Charlie would ride in the bed of the truck, and we would have the cab. I tied his long leash to the truck’s roll bar so he’d know not to jump out.

Michael looked like an architect—thin, with thick glasses, black pants, and a white shirt, the two colors separated by a belt with a brushed-steel buckle—without an architect’s manner. He loved junk food, slept in his clothes, mumbled and mixed slang and mock formality when speaking. He ’d met Charlie, but this was his first look at the truck.

“Hello Charles,” he said, then remarked, “I like the shotgun rack.”

He stared. “No, man. Umbrellas? What kind of wuss-ass keeps umbrellas in his shotgun rack? If we do that we ’re not even worthy of this truck. We ’ll be a laughingstock.” He shut the door and looked out at the road through the splintered-flag windshield. Fifteen up-and-down cracks, thirty-one left-to-right ones, scattered constellations of stars. The motor vehicle code in our destination state read: “No crack of 11 inches long or longer is allowed if any part of the crack is within the area cleared by the windshield wiper.” I’d have to deal with it when I got there—no 1960 Chevy windshield replacements were available in Marfa.

Hard to say. But if we made it to New York we’d be breaking the motor vehicle code fifty-two times. Then he noticed the stick shift.

“Oh, shit, man, I didn’t sleep all night because I was worried about that. I can’t drive stick.”

“Sorry, I didn’t think it would be a stick shift. I mean, it’s American. Everything’s easy in America.”

I figured I could teach him. There was nothing to hit out in the desert. Then he told me we had to be in San Antonio by nine a.m. the next day to meet Don, his potential client. San Antonio was just under four hundred miles away. I’d been thinking we’d reach Del Rio, half the distance, following along the Rio Grande.

“You know we can only go forty-five.”

“No. Really. Look at this thing,” I said. Michael took in the ancient interior and medieval seat belts. “Can you call and say that we’ll be there around noon?”

“I only have his e-mail. I just told him we ’d be there. But come on, fifty? We can definitely do fifty.”

After a pause I said, primly, “We ’ll just keep driving till we get there.”