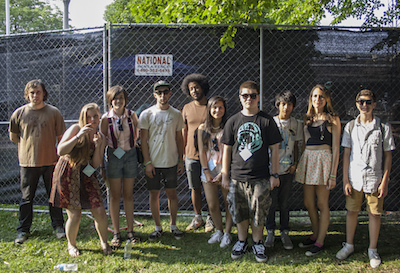 826 CHICAGO: So I was looking on your Facebook page, what is snack rock?

SADIE DUPUIS: We try to snack as much as possible in between the rocking that we have to do, like you guys. You just had pizza, so you guys are more snack rock than us right now. We only play places with good snacks—that’s important. You can only rock out with good snacks.

826 CHICAGO: How do you feel while performing?

SADIE DUPUIS: I like it; it makes me feel really good so I’m happy we get to do it a lot. Totally in my own.

DEVIN McKNIGHT: Like 1000 doves, 999 doves. Crying. Everything’s crying around me when I play.

826 CHICAGO: What’s one of the biggest things you guys had to overcome to get where you are today?

SADIE DUPUIS: We all had jobs we were working, and at some point, we had to take a chance and say should we keep our jobs and play when we can, or should we just try to go play music all the time and see how it works? We took a chance and it’s been working out so far.

826 CHICAGO: Who farts the most on tour?

DARL FERM: Me. I fart the most on tour. Yeah, it’s not even a question. They don’t smell bad. It’s just frequent. I mean, I eat Raisin Bran so… that was probably the best interview question we’ve ever had, by the way, and it’s so telling. I just like to be honest in interviews.

826 CHICAGO: Why’d you write a song about Taylor Swift?

SADIE DUPUIS: The song was written before it had a title. It’s not about Taylor Swift. After the fact, we were sitting around in the studio and we were like “this song is kinda like how Taylor Swift has all these boyfriends, maybe it would be funny to name it that.”

826 CHICAGO: How does Massachusetts compare to Chicago?

SADIE DUPUIS: You guys have better comic books. Our winters are less miserable but still sort of miserable. You guys have Big Star. I like that place a lot. We have the ocean, but you guys have the lake. It’s one of the best cities ever.

826 CHICAGO: Do we have good snacks here?

DEVIN McKNIGHT: The deepest dishes. Yeah, the more burnt the crust, the better.

DEVIN McKNIGHT: A house divided cannot stand. This band is over.

826 CHICAGO: Do you have any embarrassing facts about each other?

SADIE DUPUIS: Devin snores a bunch. I have a tail

DARL FERM: She has a tail and she doesn’t like deep dish.

826 CHICAGO: So you have a picture of Treetrunks from Adventure Time on your Facebook page. Does Treetrunks represent anything?

SADIE DUPUIS: She throws a really good wedding party and she’s got some jewels.

DARL FERM: She’s got the sass that we identify with.

SADIE DUPUIS: She made a good pick with Mr. Pig.

826 CHICAGO: If you guys could have any superpower, what would it be?

DEVIN McKNIGHT: Definitely to fly. I like to take my time.

826 CHICAGO: So there are two pills: a red pill and a blue pill. The red will make you have the voice of an angel and people will cry when you sing and the blue will let you be able to play every instrument on earth from the trumpet to the pan flute, which do you take?

DEVIN McKNIGHT: The second one definitely, the pan flute. If I could go from pan flute to bongos back to pan flute to like the wind chime I’d be the man.

DARL FERM: I wanna master the gong, so yeah.

826 CHICAGO: Would you rather not be able to tell the difference between a baby and a muffin or switch genders when you sneeze?

SADIE DUPUIS: Switch genders. I wouldn’t want to accidentally eat a baby and I’m cool with both genders.