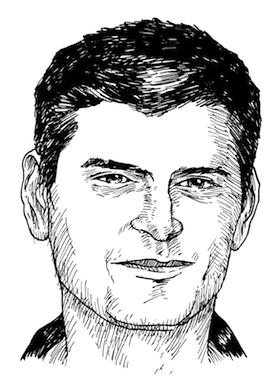 The Believer’s fall issue is shipping to subscribers and bookstores this week. In the issue, I speak with Michael Schur, the writer/producer of most of your favorite sitcoms (seriously: Parks & Rec, The Office, Master of None, Brooklyn Nine-Nine, The Comeback…). I wanted to interview Schur for The Believer because he is a believer. His faith in the power of optimism and kindness underscores all of his work, and binge-watching one of his series is the filmic equivalent of eating comfort food. (When my grandpa died a few years ago, a friend showed up at my apartment with Parks & Rec DVDs in hand.) But Schur’s sentimentality never feels cliché—in fact, his work is smart, original, absurd, and even subversive. In the interview, we discuss the state of network television, David Foster Wallace’s influence on his work, and why he named one of his characters Gwendolyn Trundlebed. Below, you’ll find an excerpt from our conversation.
— Stephanie Palumbo

THE BELIEVER: What were your first experiences writing comedy?

MICHAEL SCHUR: In high school, my friend and I discovered that your cable-access station had to let you do whatever you wanted—it was like the Wild West. We made a couple weird things, like a tribute to the Zucker brothers, where we had a panel discussion about the Naked Gun movies. We wrote a script and made jokes that I’m sure were terrible and showed clips of The Naked Gun without permission. Then in college I got on to the Harvard Lampoon staff my freshman year. Once I graduated, I moved to New York, and got hired at Saturday Night Live that December.

BLVR: Your first year at SNL was the year Chris Farley and Phil Hartman died, right?

MS: Yeah, and Norm Macdonald got fired, which obviously pales in comparison, but it was a weird upheaval. My first show was the first show after Chris had died and Norm got fired. SNL is 100 percent sink or swim. The first day, I showed up and no one was there. Not one other person: no receptionist or interns or people at all. Honestly, I thought a prank had been pulled on me. So I just nervously sat down on a couch and stared straight ahead for an hour. People started to filter in, but I was too nervous to even say anything. Finally someone was like, “I think your office is over there,” and someone else was like, “We have a meeting now where you can pitch ideas to Samuel L. Jackson.” No one told me anything. That’s the way that place operates—they throw you into the fire. The nice thing is, they give you some time to figure it out. If you don’t get a sketch on for three or four shows, they don’t fire you, but it was a scary and jarring introduction to the world. Because of the shift, no one paid attention to me, which was nice, because I sucked at sketch writing for a pretty long time. If it hadn’t been for that upheaval at the show, it’s possible I would’ve come under greater scrutiny.

BLVR: Do you remember the first sketch you got on the air?

MS: The first joke I got on the air I remember clearly. Dennis McNicholas and Robert Carlock wrote a sketch where they were evacuating the Titanic, and the last two guys on the entire ship were the two black guys, Samuel L. Jackson and Tracy Morgan. So Will Ferrell was running back and forth, saying, “All first-class passengers get in the lifeboat. All second-class passengers and third-class passengers get in the lifeboat. Let’s get all the animals in the lifeboat. Let’s put all the empty luggage in the lifeboat.” It was very funny. And then the joke that I wrote, which was the first thing I ever wrote that was on TV, was “All empty lifeboats should now be placed in other lifeboats.” Even though 99.4 percent of the sketch was conceived of, written, and executed by other people, just seeing words I had written be performed on SNL, I felt like: I can quit now. If this is the last thing that ever happens in my professional writing career, I’m happy.

You can purchase the issue in its entirety here. It’s also available on the Nook and the Kindle.