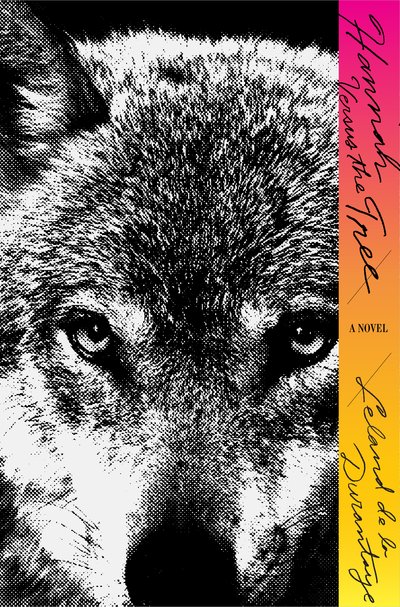 Hannah is a fiercely intelligent young woman, daughter of a powerful family’s black sheep son, and raised to question who has been, is, and will be damaged by business deals meant to protect and maintain the dynasty. A devastating wrong is done to her when she opposes a family scheme and her response is a battle cry of astounding violence and beauty. As haunting as Shelly Jackson or Thomas Bernhard, as enthralling as Nabokov or Joyce, Leland de la Durantaye’s debut novel is a radical departure from contemporary storytelling. At once the story of a terrific act of vengeance and of a lifelong love, Hannah Versus the Tree presents a new literary genre, the mythopoetic thriller.

McSWEENEY’S: You’ve previously written nonfiction academic books and been a translator of fiction. What inspired you to switch to writing fiction?

LELAND de la DURANTAYE: I had been writing fiction-like things for years, but only in the margins of studying philosophy and languages. Living in Berlin, Paris, and Rome, I was happily absorbed by other languages than my native one, and much of my creative energy flowed through my experience of those languages. Then I was lucky enough to become an Associate Professor of English and Comparative Literature at Harvard. I was married to a German woman who had come to the United Staes for me and felt a particular responsibility to get things professionally right, and so I threw a great deal of energy into academic enterprise. What fiction I wrote would never cohere. And then, much earlier than I had imagined, I was named a Full Professor, in faraway California, which meant I was no longer writing for anyone else’s expectations other than my own. Hannah Versus the Tree is what ensued.

McSWEENEY’S: Hannah Versus the Tree presents a new literary genre, the “mythopoetic thriller.” How would you describe this genre?

LDLD: The thriller part is straightforward enough. There is a good deal of sex and violence and large-scale conflict in the book, as well as a significant element of suspense, and thus it is in some generic sense a thriller. But Hannah Versus the Tree is poetic in the sense that it is basically lyric, it is spoken exclusively in the voice of love. As for the myth of mythopoetic, that is the easiest. The story has a clear and pronounced mythic shape, that of a certain kind of myth about a certain kind of revenge.

McSWEENEY’S: The book is in one sense a celebration of the art of revenge. Do you believe that in certain circumstances, and in certain forms, revenge is good?

LDLD: It certainly feels good. And it is the driving force in Western literary history. The first line of the first work of Western literature is “Sing, Muse, of the wrath of Achilles.” Achilles is wrathful to avenge the rape of Helen. Hamlet is a story of revenge. It is not even exclusive to humanity. Moby-Dick was based on the real-life animal vengeance a certain whale took on the whaling ship Essex. Whatever else Hannah Versus the Tree is, it is the story of a heroine. And avenge themselves is something that heroes and heroines often do. But as concerns the common human good, vengeance is bad. In modern society, vengeance is the exclusive right of the state. Christianity in its first centuries was beautifully anti-vengeance, but it, of course, became an incredibly vengeful historical force. So I would say that if vengeance is good, it is good not in life, only in art.

McSWEENEY’S: In the book, the most noble and pure characters are mainly either young or old (“the wise one” and “the old one”). Is this book in part an indictment of the moral compromises, hypocrisy, and cynicism of the adult world, between the extremes of youth and old age?

LDLD: That never occurred to me, which must just show what a deep truth it is for me. I am now forty-six and my worst birthday, by far, was not 40 or 30, but 18, because it meant I was, at least legally, the last thing I ever wanted to become, an adult. But I quite liked the very old, and still like the extremes and so I suppose this is true. Adults are terrible, we are a standing affront.

McSWEENEY’S: The book feels so timely and relevant to a number of high-profile, controversial issues: wealth inequality, rape being covering up by powerful people, hacking and “trial by social media.” How much were contemporary issues and particular news stories on your mind when you wrote the book?

LDLD: Not at all. I think. I wrote Hannah Versus the Tree three years ago, during a year’s sabbatical in Rome. When I wasn’t writing it I was translating Italian philosophy and spending most of my days in an outrageously beautiful 16th-century library on the top floor of the Palazzo Farnese, and the news felt very far. The little I knew came through my mother, and so I knew the political situation a bit, but it was all still remote and vague. That said, my parents were hippies and activists and never made any secret of their sense of the economic violence at the heart of modern industrial societies (cf. adults above) and so there may be ways in which I am simply reflecting my upbringing. But if there is any real reason why I wrote what I did, it was not to denounce social ills, or to present political hypocrisies, but to write of love.

Buy the book in our store.