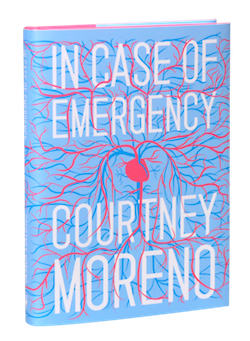 What do you do when you can’t function? After rookie EMT Piper Gallagher responds to a call outside a Los Angeles shopping mall for a man who can only tell her, “I can’t function,” the question begins to haunt her. Piper’s experiences as a rookie break her down and open her up as her genuine urge to help patients confronts the daily realities of life in the back of an ambulance and a hospital’s hallways. McSweeney’s Books is proud to present an excerpt from Courtney Moreno’s vivid and visceral debut, out now and available here.

Ruth says I need to see South Central. She throws Carl and me in the rig and drives around 710’s district. “We’re first up for all calls,” she says. “And we’re not going back until you’re better at mapping.”

She and Carl point out landmarks. The pale pink church at the corner of Van Ness and Arbor Vitae, where you sometimes respond to congregation members who’ve fainted. The crack house at 92nd and Dalton, a dark green shoebox whose color contrasts sharply with the straw-colored weeds. It has a BEWARE OF DOG sign but no dog, the empty leash drooping from a wrought-iron fence. Carl tells me everyone wants to run a call on that place, to see what the inside looks like, but no one has.

I learn about the dive bars, the convalescent homes, the elementary schools. Which restaurants get people sick. Which intersection has the highest homicide rate. Carl points out two small parks within a mile radius of each other, explaining that the men who ride their bicycles in circles, ringing the little metal bells on their handlebars, are actually drug dealers, the ringing sound an advertisement. We pass another landmark, the abandoned warehouse on the corner of 112th Street and Normandie Avenue with its tilted rusty sign and mural of gang tags, the remaining shards of glass hanging in the frames like an ever-shrinking jigsaw puzzle. The deserted Buick on Central Avenue could almost serve as a landmark, too, covered in parking tickets like feathers, at least until they tow it away. I wonder if Ruth and Carl are as familiar with their own neighborhoods as they are with these streets. Their attitude toward South Central falls somewhere between resident and tourist.

Looping through the neighborhood, Ruth explains which avenues and boulevards are the easiest to oppose traffic on, and Carl warns against a convenience store that’s had three robberies in the last month. I look at the piles of trash on the sidewalk, the crumpled shapes and decay-coated buildings, the way the early morning light casts quiet over everything. There’s something here I hadn’t expected, a deeply rooted sense of community in this wrecked and broken place; it’s apparent in the way everyone yells their hellos and seems to know each other.

Ruth and Carl wave their own hellos at a trio of transients standing in an alley. “I’ll bet you lunch we pick up Sadie before eleven,” Carl says.

Our first call comes in at 0816. I’m beginning to recognize my pager’s language: “57/ M ALOC” means a fifty-seven-year-old man has an altered level of consciousness. Ruth pronounces every acronym as if she were reading off the letters of an eye exam, but Carl refers to this one as “A-lock.”

Ruth hits the gas as she flips on the lights and sirens. “Map me to my call!” she yells. “If I make it before you’ve mapped me there, you’re going to polish our boots.”

I open my Thomas Guide and quickly reel off directions to 134 Kansas Avenue, but Ruth shows no sign of approval. She switches to quizzing me as she swerves around cars, her aggression clearly habitual. “What are possible reasons a person might be altered?”

It’s shocking to witness how many drivers refuse to pull over to the right.

“They could be hypo- or hyperglycemic, or it could be a drug overdose or a stroke. They could be in shock, maybe from trauma. Like a blunt force injury to the head?”

“Hypoxia. Hypoxia. That’s when brain cells are deprived of oxygen…”

My brain is being rattled for loose change. “Oh, right! If a person has a seizure, there’s the post-ictal phase afterward, when they’re disoriented.”

“How do you treat a seizure?”

“Turn them onto their side so they can’t choke on their tongue, give them oxygen, do a rapid trauma assessment for injuries.”

“Check eyes, motor, verbal, try to get onset and duration from witnesses.”

Carl adds playfully, “I’m usually ALOC on my days off. Due to EtOH.”

Ruth uses even Carl’s sense of humor as a means to quiz me. “We talked about this.”

Other drivers’ faces are a blur as they ignore the emergency vehicle’s howl and flash. People talk on the phone and sing along to music. One guy is picking his nose and looks up, caught, as we fly past. I remember the jaundiced patient the other day, the way he had reeked of booze and his eyes had lolled.

“Alcohol? You say that if someone has been drinking?”

“Correct. EtOH is the chemical abbreviation for ethanol. It’s a way of saying your patient is drunk without them knowing what you’re talking about.”

She slows and parks, aligning the rig with 134 Kansas Avenue. Leaving the emergency lights on, she uses the radio to tell Dispatch we’re on scene. In front of the leaning one-story, a rusted Chevy sits on blocks in the oil-stained driveway, and a couple of stray cats clean themselves amid the tall weeds of the front yard.

Carl puts on a pair of gloves with a loud snap. “Let’s go say hello to Teddy boy.”

“They treating you okay, Piper?”

“Hi, Vick.” I smile at him and turn my head just in time to see Ruth glowering at me. The front door is ajar and leaning off its hinges; we lift the gurney inside. Vick is in charge. He calls out and there’s no answer. We walk into the next dimly lit room and see a shape sprawled on the couch. One of the firefighters searches for a light switch with his flashlight. I can just make out his reflective yellow pants moving around the room, the glow of the flashlight’s halo swiveling above.

When weak light spills from an overhead lamp, I see Vick already kneeling by the couch, briskly rubbing the man’s chest with his knuckles. The whole place smells dank, stale.

I stare blankly at her and then spring into action. I don’t yet have the confidence they do, that unique assumption that I can just stroll into a stranger’s home and start touching and talking to him. But I rush to get a blood pressure and a D-stick with my shaking hands; Carl hooks him up to the EKG monitor and the pulse oximeter.

“His sugar’s 33!” I call out as the glucometer accepts the drop of blood and a number flashes on the small screen. I am at war with a Band-Aid: I am losing. One of the adhesive ends clings to my gloves. If he’s in this kind of shape, who called 911?

But then she appears, an unconcerned woman holding a cup of coffee and a pack of cigarettes, her belly pushing out against her tank top and pajama bottoms. She tells us that he hasn’t eaten since yesterday, but she gave him his insulin as usual this morning.

As if that’s his cue, Teddy turns into a monster. A swinging, grunting, drool-slinging brute who would’ve clocked me in the face if I hadn’t leaned back just in time—and yet even after this transformation, his expression remains oddly relaxed, childlike.

This is what it looks like when someone’s brain is dying.

Courtney Moreno’s award-winning writing has been published in LA Weekly and Best American Non-Required Reading. She received a B.S. in molecular biology from the University of California, Berkeley, and an M.F.A. in creative writing from the University of San Francisco. During the ten years in between, she worked as an entomologist’s assistant, lab technician, clinical research coordinator, stagehand, set carpenter, modern and aerial dancer, EMT, and field training officer. She lives in San Francisco. Purchase In Case of Emergency here.