Here are two letters from readers of Everything That Rises, both of whom were responding to the “Fathers and Daughters” piece, in which Weschler riffs off a suite of photographs by Tina Barney of the same father and daughter, Peter and Marina. The Barney photographs below are from 1987 and 1997, respectively. 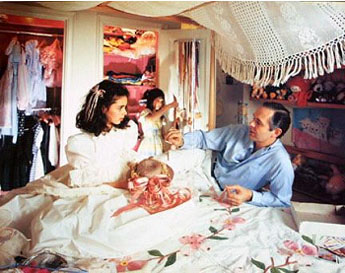 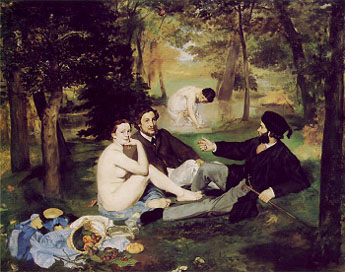 By now I am sure you have seen this association (between the Barney photo and Manet’s Le déjeuner sur l’herbe, from 1863). I thought of it immediately on cracking Weschler’s book and seeing these luscious photos. The man’s pose and gesture were the reminders to me, and the girl’s innocence, and the figure behind. Though the father (in the Barney) is hardly a lunch companion to fully unclothed hauteur, the power relationships in both are compelling. The figures behind in each (hypothetical nonobserver) seals the deal for me. This passivity behind, the attention elsewhere, only brings the front relationships further forward. 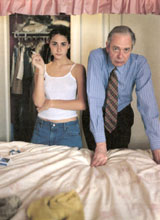 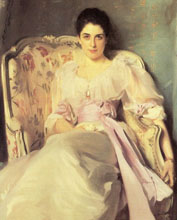 I was walking through a bookstore today and this card (John Singer Sargent’s Lady Agnew of Lochnaw, circa 1892–93) jumped out at me as the great-grandmother of the Tina Barney girl on page 88. Check out the pink sash and the pink canopy over the bed. The white bedding and the white dress. The looks on their faces are the same!

Aren’t those amazing? The question, of course, being, what are we to make of the rhyme: intentional or not, and does it matter?

In the case of the former, we know that Manet himself was quite self-consciously bounding off of the marvelously evocative (and yet endlessly elusive) Concert champêtre (1508–9) by Giorgione (though some attribute it to Titian), in which the artist appears to have been making some sort of allusion to the muses and their minions. 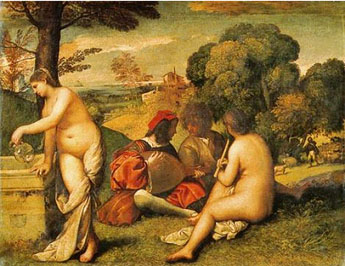 Manet, for his own part, translated the scene to the present, causing a considerable scandale (and getting the piece rejected at that year’s Salon), even though, when you think about it, Giorgione/Titian’s figures had likewise been garbed in then-contemporary dress, and nobody seemed to mind then.

The question is whether Barney had Manet in mind when composing the photo at hand, or, at any rate, when picking this vantage in particular rather than any of the others from that day’s shoot. As it happens, I was able to ask her and she insisted absolutely not, the rhyme hadn’t even occurred to her, and she still couldn’t quite see it. And Tina Barney is an honorable source … Still, the rhymes do just keep on rebounding: the canopy of the bed and the canopy of the leaves; the overbrimming hat and the overbrimming basket—for that matter, the one hat and the other; the closet and the pond both pushing back into further space there at the center; the horizontality of the canvases, both of them banded by those repeating verticals …

As for the other, again, yes, look at that. Exactly the same look on their faces, a look that I would describe—and in fact did describe—as “self-assured, ironical, a drowsy-lidded gaze freighted with entendres and double entendres,” and one which, now, seeing the Barney alongside the Sargent, I realize is quite simply a look of sublime entitlement, of high bourgeois (yes, that word again) hauteur.

“Ah,” sighed Talleyrand, “nobody who wasn’t alive then will ever know the sweetness of life (la douceur de la vie) before the Revolution.”