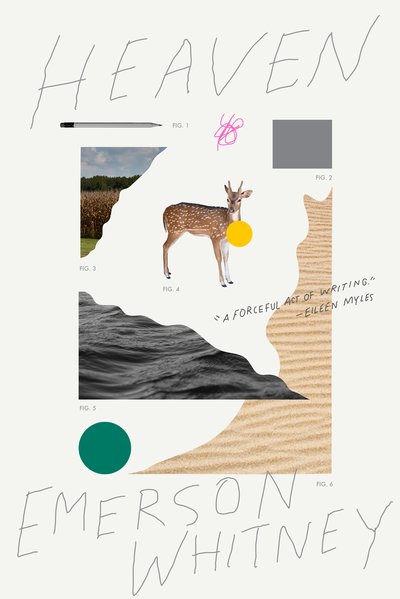 AMANDA UHLE: When you tell people about this book, how do you describe it? Is there a way, in just a sentence or two?

EMERSON WHITNEY: I often say that it’s about womanhood and motherhood and selfhood (sometimes I say trans-ness too) and how our childhoods do or don’t make us up, and that it’s an experiment in autobiography.

AU: Why experiment with the form of autobiography?

EW: I honestly don’t think I have much of a choice. I don’t really consume anything with a linear narrative (like TV or movies—and why not?? I want to be able to, but I end up looking just to the left of the screen like trying to get away. Maybe I’m just too sensitive? Anyway.) This way of working is a reflection of the way I interact with the world, via the mediated reality of writing, but interrupted, and with lots of sensation. I also love the definition of theory that’s “the thinking of being” and mashing the tradition of experimentation in that genre together with the subjective “I” is really hot to me.

AU: When you began writing, were you hoping to chronicle these events? To say something more universal? I’d love to know more about how you envisioned this project at its start and how it may have spun into something else, if it did.

EW: Well, this project absolutely surprised me. I really did think I was writing vignettes that might form a sort of chronicle. I didn’t realize I’d get to theorize as the “grout” of the book, but I’m delighted that it worked out that way. I’ve always struggled to write the analysis of any image that I’ve crafted. Generally, I like images to just hang there and be impactful by themselves. But, for the purposes of this text, I’m really happy that theory is what allowed me to hold those images and then hand them off.

AU: As that change was occurring during the writing of the book, did that cause you to go back and rework some of the passages you wrote initially as images? The book manages to convey those images and vignettes in a vivid narrative and simultaneously your grout of theory feels elemental to it all. I imagine you were pretty purposefully toggling between the two?

EW: I was! But I didn’t end up reworking the image passages very much. So grateful that they just got to hang there like they do amid the theory.

AU: How much, if at all, did you think about fidelity to facts in the writing about your own history? Some memoirists operate on that gut level of memory, and others are dogged researchers, and I wonder where you are on that spectrum. As a reader, I found so much joy in the sharp bites of reality in the book. I think they were powerful emotionally completely outside how accurate they may be.

EW: I am not at all a dogged researcher. I’ve kept a very meticulous journal forever, but I didn’t reread those at all in this process. I have always felt these stories as memories. This is the unforgettable material that made me up. That felt sense is what I deeply wanted to communicate.

AU: What are your early readers telling you about the book? I wonder if other readers, like me, find themselves reflecting on what makes us up, too.

EW: Yes, that does seem to be the case. It’s exactly what I was hoping for, honestly. I’m really grateful that folks seem to be playing with ideas around suspending categorization and questioning what exactly makes a self. People also seem really interested in the form and how the language works to support this kind of suspension. They’re also reporting a sense of acutely, deeply feeling it and being impacted by that feeling, which is absolutely what I wanted.

AU: Early in the text you say, This is the question of my body and my story about it: is it just mine? It refers to a specific passage about an exchange with your grandmother, but it has some broader meaning, I think. You finished writing some months ago, and I wondered if you felt the question had been resolved to your own satisfaction while you were writing this, or after, or if it ever will be.

EW: Oof. No resolution here! I’m still chewing on this for sure, likely always will be.

AU: You ask questions of yourself and answer them throughout HEAVEN. What do you hope readers will be asking and answering of themselves?

EW: I’d love for people to reflect on agency, their own and others, and who has it and who doesn’t based on oppressive systems that impact us all.

AU: What are you writing now?

EW: Ah! I’m working on my dad companion book to this mom one actually. Ha. I love the Collected Works of Billy The Kid by Michael Ondaatje and wanted to do something with that texture. I went on a tornado chasing tour a few summers ago (the kind where people pay 4k each to live between a passenger van and chain motel rooms for multiple weeks driving through Texas and Oklahoma and Kansas and the Dakotas chaperoned by a storm chaser). I was fascinated by that trek and the disturbing thing that is adventure tourism, and one of the companies let me go for free so I could write about it and we ended up struggling to find a tornado, which became sort of hilarious. I grew up partially in Dallas (as you know) and would go tornado chasing with random dudes I met on the internet when I was like 14. It’s autobiographical again (maybe my work always will be?). This has ended up being a story about fatherhood and masculinity and what it means to “perform” — like what happens when we can’t find it? In a pretty ridiculous way, the tornado on this trip was sort of manhood in general — like, daddy? What if we can’t get to it? Can anyone? Probably no.