I Know What’s Best for You: Stories on Reproductive Freedom, edited by Shelly Oria, is a multigenre anthology with a focus on the crisis of reproductive rights in the United States. The book’s international supplement features sixteen additional works of fiction, nonfiction, and art by contributors from around the globe. Preorder the book, and receive the supplement, I Know What’s Best for You All Over the World, free as an e-book.

My work deals with the gaps between stability and instability, placement and displacement, familiarity and estrangement. I appropriate familiar objects, images, and sounds from my surroundings and transform them into an intervention, inviting the viewer to reconfigure their understanding and relationship to the world. These interventions seek to push the boundaries and challenge the status quo by departing from their familiar function, turning the critique inward to question their own existence.

The artwork Buqjah is a sculpture made out of plaster in the shape of a cloth bundle that contains the resemblance of round objects. This object is hollow and light. It’s not the object but a representation of it, presented on a colorful reflective surface covered in a transparent Perspex box as a commodity or a product—a souvenir.

I materialize social relations in their essence. The materials—plaster and white paint—represent the institution. The white fabric resembles a white flag or a cloth that is placed on furniture when leaving a space, protecting it from the effects of time.

“Buqjah” means “a bundle.” It is one of the Palestinian art symbols of migration—hijra—resulting from the Nakbah in 1948. Originally, a buqjah was a piece of fabric, usually a bedsheet, that Palestinians threw their belongings, or whatever they could grab, into as they ran from the Israeli occupation forces invading their houses, villages, and cities. The root of the word “hijra” (migration) is “ha-ja-ra” (migrate or abandon); the verb is “yah-jor” (abandoning).

In many ways, this artwork examines a phenomenon that pervades many layers of existence; political, cultural and personal.

In other words, it is an embodiment of the complex multilayered dynamic of existence or dwelling in a place and space. Being a woman, a Palestinian, an artist surrounded by Palestinian society and culture living in Israel, presenting my work in the art institution—these various layers, along with their expectations, bring this artwork to life.

Politically, Buqjah criticizes the duality of what is expected from Palestinian art—in the art institution in general and the Israeli one in particular. In general, my work is expected to deal with two main subjects: political victimhood and female victimhood from a patriarchal society. But in both cases it has to be white enough for the institution’s taste. This is how catastrophe becomes a product, a commodity, that can be sold in the art world, diluting the essence it possesses.

This artwork also questions itself. In this process of making, personal questions rose to the surface: Am I doing to my body what the institution is doing to the art? Am I choosing not to give birth or is it what is expected of me in society, outside the marriage institution? Am I putting my eggs in a white bundle? Does “hijra” exist in various dimensions of different spaces, in the body or outside of it? Is my decision camouflaged enough for the public sphere, similar to the state of Buqjah in the art institution?

Buqjah presents what is expected in the art institution from a female Palestinian artist and at the same time criticizes this dynamic and questions itself. It’s feminine and masculine at the same time. It’s the embodiment of expectations and critique in the same object. Wondering whether a choice, an object, or an idea can exist on its own with no relation to its environment. 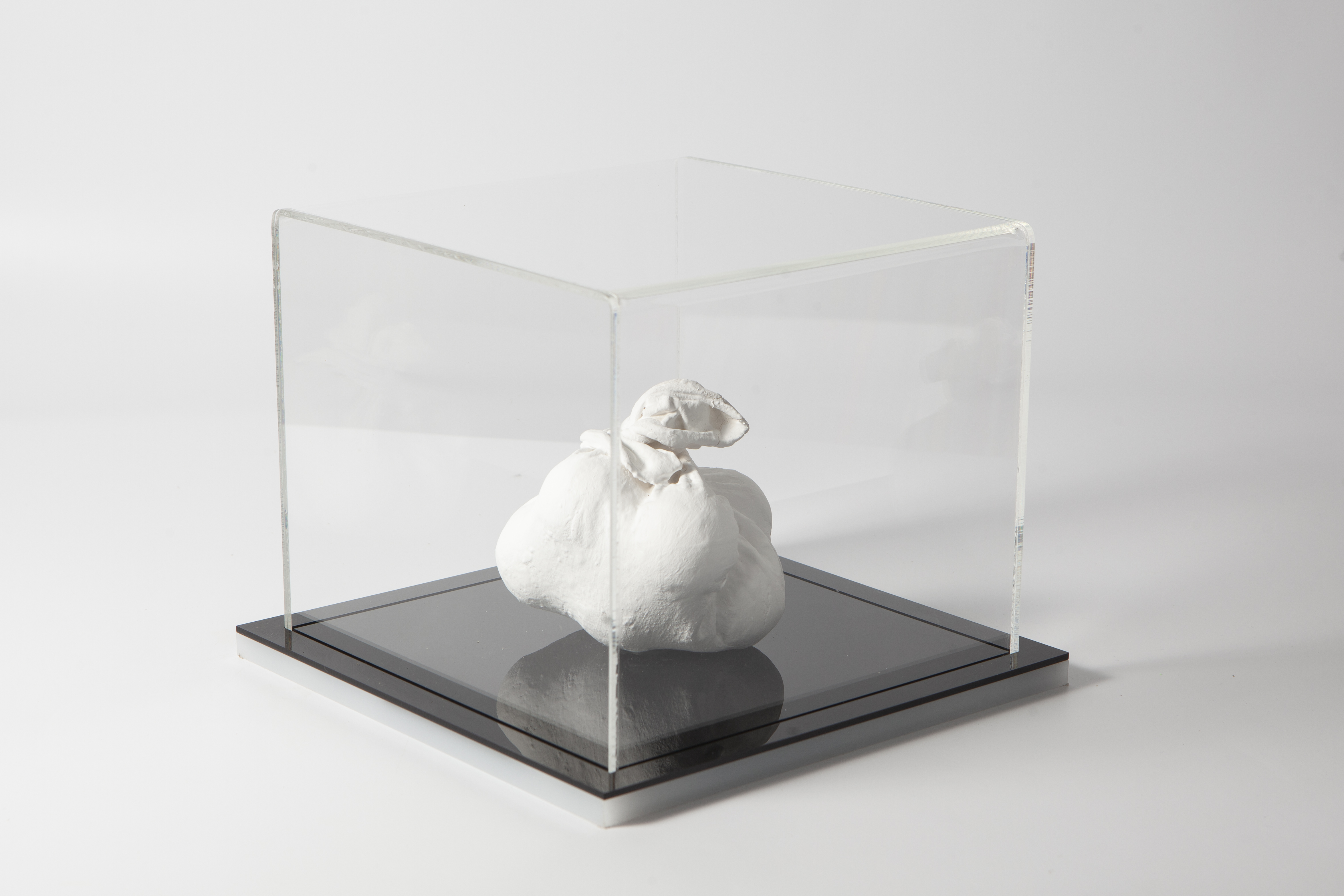 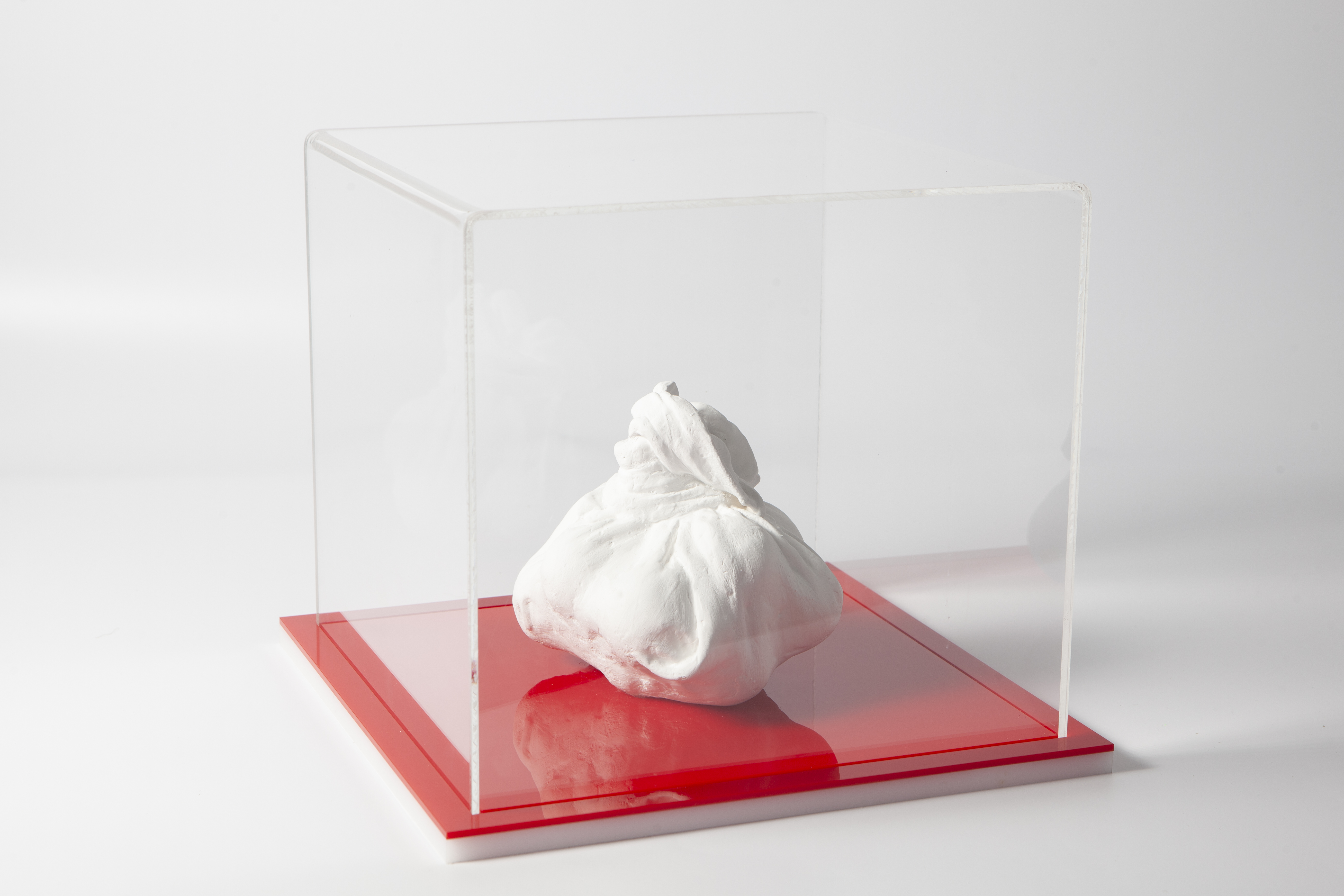 Nardeen Srouji is a multidisciplinary Palestinian artist. Born in Nazareth, Israel, and based in Haifa, Srouji has an MFA in from Bezalel Academy of Arts and Design and a BA in English literature and fine arts from Haifa University. Her works have been shown in various exhibitions and institutions, including: the Qalandiya International Biennial, Ramallah, Palestine (2012–14); her solo show, Out of Context [ ], Beit-Hagefen Art Gallery, Haifa, Israel (2019); and Skein, the Tel Aviv Museum of Art, Israel (2021–22). Currently, Srouji teaches at Bezalel Academy of Arts and Design and is a resident of Artport Tel Aviv’s yearly program (2022–23).