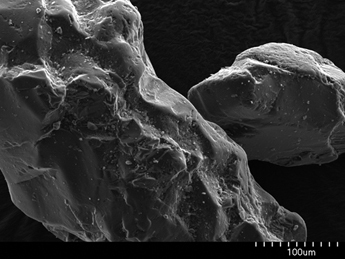 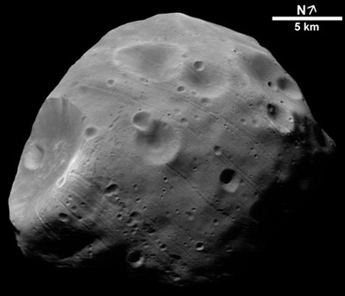 The top image is a portrait of two grains of Coney Island sand. Below it is a NASA image of Phobos, one of the moons of Mars.

For some years, I have been working on a sand project, which has had many iterations. The images here are part of an installation and book I am currently working on, both of which I’m calling Sand Portraits. In the past, I did an installation called The Sand Counting Lab, which was about both myself and visitors to the exhibition counting grains of sand, for weeks at a time, as a mantric metaphor for the coming to terms with statistical populations that go unseen or unacknowledged. In that case, the population of prisoners then incarcerated in the U.S. penal system. All these projects attempt to gain a sense of proportion between the infinitely small and the infinitely large in order to place human experience somewhere in the middle, halfway between the two extremes, and thus still countable, and hence accountable.

A quote from some writing I have done for the project may help elucidate this absurd endeavor:

Between the desire to grasp the significance of a quantifiable event and the methods used to represent it, there is a gap. As we know, the very framework of observation might influence the concluding analysis. But whether or not statistics can provide us with a truthful number, we still feel a lack. Because what is missing is the experience that would connect us to the other the number is supposed to inform us about. This silent space is the subject of this project.

The sand portraits are of grains of sand that have been counted from parts of the world where The Sand Counting Lab has been installed or from places where people have heard about the project and have sent me sand. The images of these grains have been taken with a scanning electron microscope courtesy of Joey Stein at the American Museum of Natural History. The other image here, as I say, comes courtesy of NASA.

What a beautiful and evocative catch. And yes, of course, just as any work of art subsists somewhere between the worthless and the priceless, human existence plays itself out at the precise midway point between the infinite and the infinitesimal. The attempt in either case to figure out exactly where being, yes, as you describe it, a quintessentially absurd endeavor—which doesn’t make it any less vitally essential for all that. Not for nothing did Camus cast Sisyphus as his absurd hero, endlessly rolling that stone up the hill only to have it come endlessly falling back into the valley once again. And yet not for nothing neither did Camus deem Sisyphus happy in the end.

Now, as for your stones, I am reminded first of all of the marvelous passion of the late Candy Jernigan, who back in the early ‘80s would accompany her husband, Philip Glass, to a remote fog-shrouded outpost in Nova Scotia, where he liked to compose, and she for her part took to making sequences of delicate pencil portraits of the various beings all around her, including one folio of “Ninety-Nine Blue Rocks,” samples of which we presented back in McSweeney’s Issue 6, and some of which we re-present below: 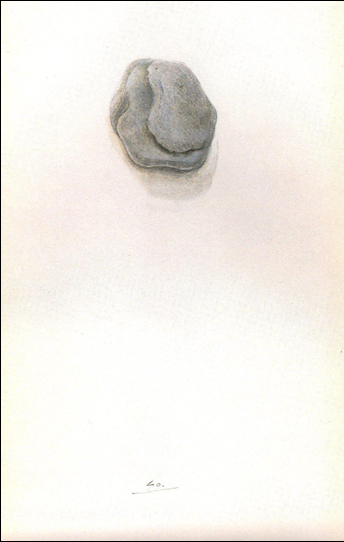 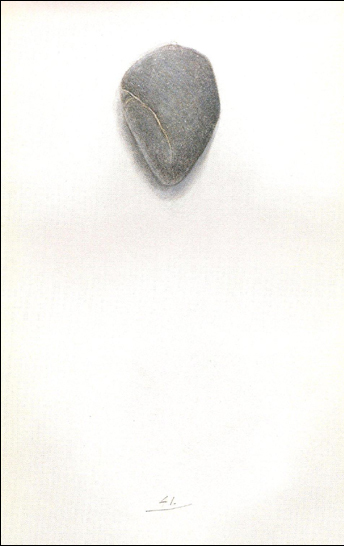 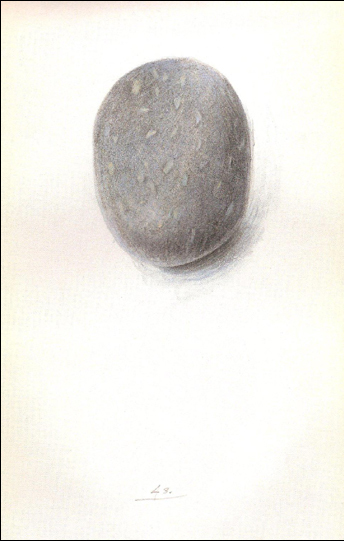 At the time, Jernigan’s pencil portraits had reminded me (as do Ms. Cornyn’s offerings) of a verse portrait from one of the great masters of 20th-century Polish poetry:

The pebble
is a perfect creature

its ardour and coldness
are just and full of dignity

All of which in turn now reminds me of Sartre’s insistence all across Being and Nothingness that “a man is not a man the way a rock is a rock,” which is to say that no matter how much consciousness craves the condition of being perfectly equal to itself (the way a pebble is “filled exactly with a pebbly meaning”), it keeps on falling short or overshooting (that is, until it finally finds itself stilled in death). Which is to say, Pierre cannot be a pierre, until, that is, that’s all he can be. An admittedly absurd situation perfectly captured by that other great Polish master’s response to Herbert’s poem:

I knock at the stone’s front door.
“It’s only me, let me come in.
I want to enter your insides,
have a look round,
breathe my fill of you.”

“Go away,” says the stone.
“I’m shut tight.
Even if you break me to pieces,
we’ll all still be closed.
You can grind us to sand,
we still won’t let you in.”

I knock at the stone’s front door.
“It’s only me, let me come in.
I’ve come out of pure curiosity.
Only life can quench it.
I mean to stroll through your palace,
then go calling on a leaf, a drop of water.
I don’t have much time.
My mortality should touch you.”

“I’m made of stone,” says the stone,
“and must therefore keep a straight face.
Go away.
I don’t have the muscles to laugh.”

I knock at the stone’s front door.
“It’s only me, let me come in.
I hear you have great empty halls inside you,
unseen, their beauty in vain,
soundless, not echoing anyone’s steps.
Admit you don’t know them well yourself.”

“Great and empty, true enough,” says the stone,
“but there isn’t any room.
Beautiful, perhaps, but not to the taste
of your poor senses.
You may get to know me, but you’ll never know me through.
My whole surface is turned toward you,
all my insides turned away.”

I knock at the stone’s front door.
"It’s only me, let me come in.
I don’t seek refuge for eternity.
I’m not unhappy.
I’m not homeless.
My world is worth returning to.
I’ll enter and exit empty-handed.

And my proof I was there
will be only words,
which no one will believe."

I knock at the stone’s front door.
“It’s only me, let me come in.
I haven’t got two thousand centuries,
so let me come under your roof.”

“If you don’t believe me,” says the stone,
“just ask the leaf, it will tell you the same.
Ask a drop of water, it will say what the leaf has said.
And, finally, ask a hair from your own head.
I am bursting with laughter, yes, laughter, vast laughter,
although I don’t know how to laugh.”

Meanwhile, as for your prison/sand project, burrowing as it does to find some way to represent the over 2 million prisoners currently moldering away in America’s penal justice system (a substantial portion on nonviolent drug-related charges), I am in turn reminded of another of Herbert’s poems, where, in the voice of his alter ego Mr. Cogito, he ponders the Need for Precision, emphatically noting how

We are despite everything
The guardians of our brothers

Ignorance about those who have disappeared

Undermines the reality of the world