What follows is the astonishing outpouring of a great writer’s first impressions on encountering a new medium. Maxim Gorky (1868–1936) saw a program of Lumière films at a Russian fair and published this article in a local paper a few days later, on July 4, 1896. It is written on a completely clear slate, by someone who had not already been taught how to regard the cinema by a thousand other writers, and the newness of it all leaps from the page. What is remarkable is Gorky’s prescience in the last two paragraphs, as he leaps ahead from his description of the first films to speculation on what directions the cinema might eventually take, toward sex and violence. How did he know? 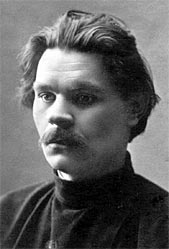 Maxim Gorky
on a Visit to the Kingdom
of Shadows.

Last night I was in the Kingdom of Shadows.

If you only knew how strange it is to be there. It is a world without sound, without colour. Every thing there—the earth, the trees, the people, the water and the air—is dipped in monotonous grey. Grey rays of the sun across the grey sky, grey eyes in grey faces, and the leaves of the trees are ashen grey. It is not life but its shadow, It is not motion but its soundless spectre.

Here I shall try to explain myself, lest I be suspected of madness or indulgence in symbolism. I was at Aumont’s and saw Lumière’s cinematograph—moving photography. The extraordinary impression it creates is so unique and complex that I doubt my ability to describe it with all its nuances. However, I shall try to convey its fundamentals. When the lights go out in the room in which Lumière’s invention is shown, there suddenly appears on the screen a large grey picture, “A Street in Paris”—shadows of a bad engraving. As you gaze at it, you see carriages, buildings and people in various poses, all frozen into immobility. 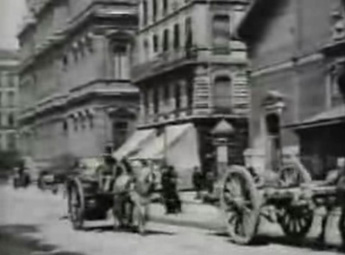 All this is in grey, and the sky above is also grey—you anticipate nothing new in this all too familiar scene, for you have seen pictures of Paris streets more than once. But suddenly a strange flicker passes through the screen and the picture stirs to life. Carriages coming from somewhere in the perspective of the picture are moving straight at you, into the darkness in which you sit; somewhere from afar people appear and loom larger as they come closer to you; in the foreground children are playing with a dog, bicyclists tear along, and pedestrians cross the street picking their way among the carriages. All this moves, teems with life and, upon approaching the edge of the screen, vanishes somewhere beyond it.

And all this in strange silence where no rumble of the wheels is heard, no sound of footsteps or of speech. Nothing. Not a single note of the intricate symphony that always accompanies the movements of people. Noiselessly, the ashen-grey foliage of the trees sways in the wind, and the grey silhouettes of the people, as though condemned to eternal silence and cruelly punished by being deprived of all the colours of life, glide noiselessly along the grey ground.

Their smiles are lifeless, even though their movements are full of living energy and are so swift as to be almost imperceptible. Their laughter is soundless although you see the muscles contracting in their grey faces. Before you a life is surging, a life deprived of words and shorn of the living spectrum of colours—the grey, the soundless, the bleak and dismal life.

It is terrifying to see, but it is the movement of shadows, only of shadows … Suddenly something clicks, everything vanishes and a train appears on the screen. It speeds straight at you—watch out! 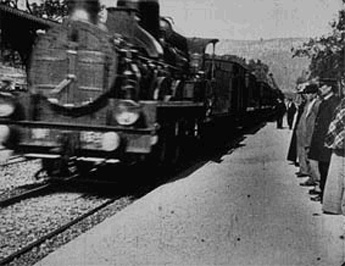 It seems as though it will plunge into the darkness in which you sit, turning you into a ripped sack full of lacerated flesh and splintered bones, and crushing into dust and into broken fragments this hall and this building, so full of women, wine, music and vice.

But this, too, is but a train of shadows.

Noiselessly, the locomotive disappears beyond the edge of the screen. The train comes to a stop, and grey figures silently emerge from the cars, soundlessly greet their friends, laugh, walk, run, bustle, and … are gone. And here is another picture. Three men seated at the table, playing cards. Their faces are tense, their hands move swiftly, The cupidity of the players is betrayed by the trembling fingers and by the twitching of their facial muscles, They play … Suddenly, they break into laughter, and the waiter who has stopped at their table with beer, laughs too. They laugh until their sides split but not a sound is heard. It seems as if these people have died and their shadows have been condemned to play cards in silence unto eternity. Another picture. A gardener watering flowers. The light grey stream of water, issuing from a hose, breaks into a fine spray …

This mute, grey life finally begins to disturb and depress you. It seems as though it carries a warning, fraught with a vague but sinister meaning that makes your heart grow faint. You are forgetting where you are. Strange imaginings invade your mind and your consciousness begins to wane and grow dim …

Besides those pictures I have already mentioned, is featured “The Family Breakfast,” an idyll of three. A young couple with its chubby first-born is seated at the breakfast table. The two are so much in love, and are so charming, gay and happy, and the baby is so amusing …

I am convinced that these pictures will soon be replaced by others of a genre more suited to the general tone of the “Concert Parisien.” For example, they will show a picture titled: “As She Undresses,” or “Madam at Her Bath,” or “A Woman in Stockings.” They could also depict a sordid squabble between a husband and wife and serve it to the public under the heading of “The Blessings of Family Life.”

Yes, no doubt, this is how it will be done. The bucolic and the idyll could not possibly find their place in Russia’s markets thirsting for the piquant and the extravagant. I also could suggest a few themes for development by means of a cinematograph and for the amusement of the market place. For instance: to impale a fashionable parasite upon a picket fence, as is the way of the Turks, photograph him, then show it.

It is not exactly piquant but quite edifying.

Yes, indeed: completely remarkable. Those last few paragraphs, to be sure, but then as well the whole notion—a complete revelation!—that the thing people back in the late 19th century first found so unsettling about cinema was that it was in black-and-white and so unnervingly silent. Whereas black-and-white silence is somehow the very essence of how we today, looking back, imagine life in that period. (It is worth noting in this context that those first films shown on those first projectors were correctly and seamlessly synched, such that there was none of the lurching stutter-step progression of movement which we also tend to associate with life in that era, an effect that only came into being when those same early films got streamed through subsequent projectors.)

But, for a converse instance, consider this other Russian instance: the pioneering color photography of Sergei Mikhailovich Prokudin-Gorskii, from 1909 (!), undertaken under a commission by Tsar Nikolas II (and collected in the book Photographs for the Tsar, edited and with an introduction by Robert Allhouse, Dial Press, 1980). 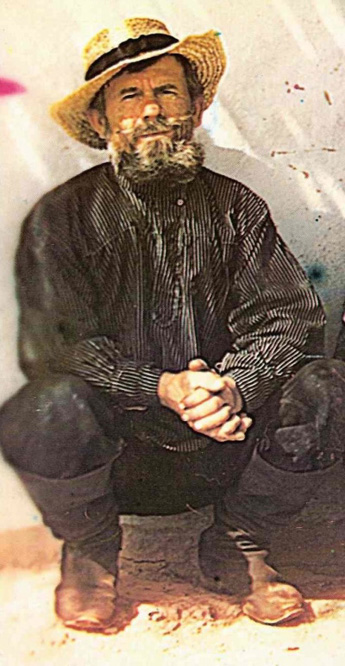 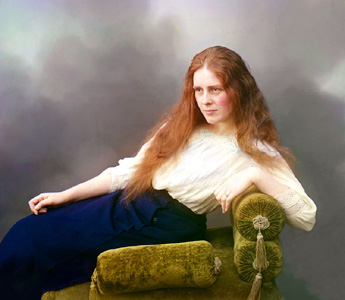 And then, for good measure, this:

Granted: not Gorky. But Tolstoy! In color!

Somehow it is almost as unsettling for us to see color photographs of people from 1909 as it may have been for them to first see moving images of themselves in black-and-white back in 1896.

For that matter, there are all sorts of things that exist in our fantasy of them only in black-and-white. I am reminded, for example, of my shock, back in 1975, upon first witnessing the shattering last minutes of the East German filmmaker Frank Beyer’s powerfully moving Jacob the Liar, portraying the doomed Jews’ view, from inside their cattle car, of the passing countryside—where it is springtime and all green and blue and wafting with liveliness: 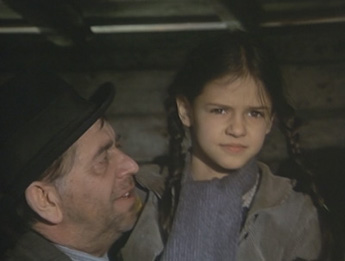 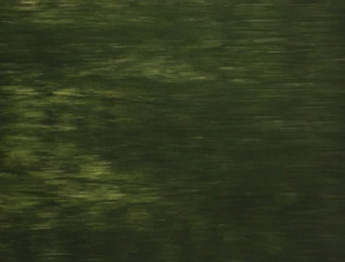 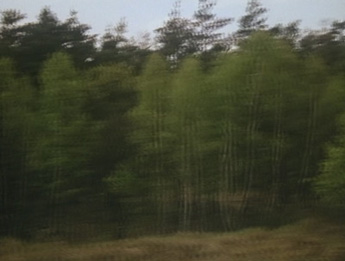 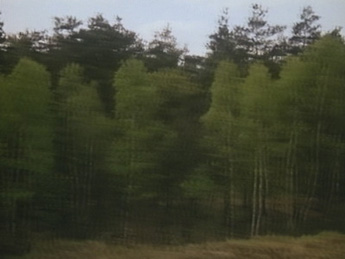 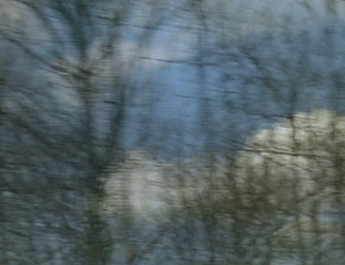 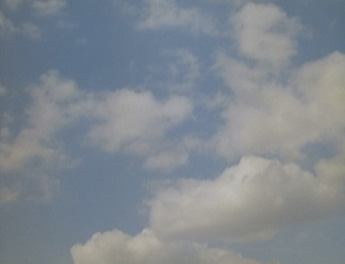 I don’t know. Somehow, I suppose, I had always imagined that once the Holocaust began, the skies of Europe clouded over, clouded over indeed with the smoke of all that death and carnage, and the thought that, of course, it was all as likely to have been transpiring in wafty, breezy springtime as in any other sort of light and weather, was almost as unsettling for me, in the darkness of that cinema, as had been the spectral spectacle that first greeted Gorky back in 1896.