While flipping through the 11th edition of Grant’s Atlas of Anatomy, I was arrested by part of figure 1.51—"Left atrium and left ventricle [of the heart]": 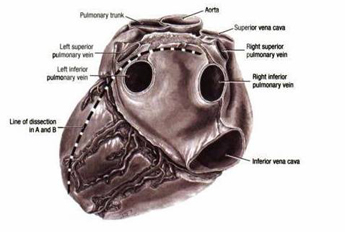 It brought to mind a quick succession of images, starting with this one: Otto Dix’s 1924 etching Stormtroops Advancing Under Gas. 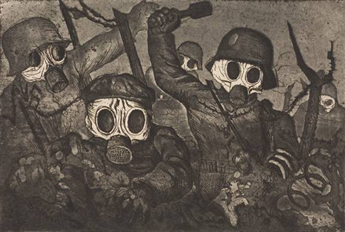 Notice the figure to the extreme left. The tilt of his head is such that he matches the Grant’s image almost exactly. A gas mask on the heart? The thought is somehow not comforting. The anatomical figure, with its trailing half-melon body and vasculature, seems like a villain from a science-fiction movie (see postscript). And the Dix drawing (hey, the word “stormtroopers” was appropriated from the German language and applied to a group of villains in a science-fiction movie!) is frightening for the horrific reality that all images of war depict (which was Dix’s intention). It is an unsettling pairing for sure. But maybe a glass-half-full way to look at it would be to think of them both as life preservers of a sort. The heart is, of course, one of the most essential organs for continued human life, and the gas mask, despite the unfortunate need for its invention, does exist to perpetuate life. (Is it worth mentioning that Dr. J.C. Boileau Grant, who was a medic in World War I, was convinced by his experiences on the front lines that surgeons needed to be accurately trained in anatomy in order to quickly recognize what they were seeing? Ironically, many soldiers chose not to wear their gas masks, because it was difficult to see out of them, the other side of vision versus life. In any event, neither of those facts probably had anything to do with the anatomical artist Dorothy Foster Chubb’s choice of angle in this figure.) Maybe these images should be seen as a positive pairing: an educational image to train doctors, and a safety device, both objects the result of the human commitment to saving lives.

Of course, one of the underlying motivations for the quest to save lives is fear, which brings me to my next, similarly conflicting, association: John Hurt as Joseph Carey Merrick, “the Elephant Man.” 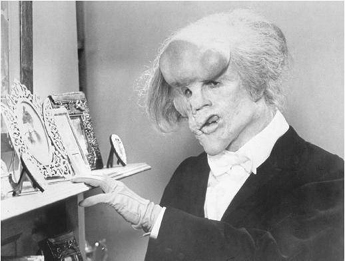 (It was tempting for me to reverse this image so that it would more perfectly match the previous two, but in the interest of fair play I’ve left it as is, and I hope that you can see that John Hurt also has his head at the same angle as the gas-mask heart and the stormtrooper above.) Merrick, of course, is the most famous freak in history. And, as a freak, he elicits those conflicting feelings: terror and disgust along with awe and wonderment. This is because, at base, freaks force the viewer to contemplate human life in all its forms. By exhibiting themselves (as Merrick did voluntarily in order to make a living instead of accepting welfare), they celebrate the diversity of human life. Merrick, who was accepted to a degree into London society, became a symbol of the value of personality over physical appearance, of the idea that all human life is important. And, to further tie in to the original Grant’s image, Merrick later became a living medical specimen exhibited at the London Pathological Society, one more piece in the furtherance of human medical knowledge. Unfortunately, as a result of his condition, Merrick was unable to sleep lying down because his neck was unable to support the weight of his head. He died in his sleep at the age of 27. There is still a debate as to whether his head fell forward, suffocating him, or backward, snapping his neck. In David Lynch’s film, there is the suggestion that he chose to go gently into that good night, a noble suicide.

Which brings me to my last image, for any discussion of life holds in it its opposite: Georgia O’Keeffe’s 1938 painting From the Faraway, Nearby.

Here, O’Keeffe reminds us that, regardless of all attempts to prolong life, death is inescapable. The skull, set in the now familiar position—the eye and nose forming the shape analogous to the heart, the gas mask, and the Elephant Man above—is, unlike the previous three images of life, which contain elements of discomfort and fear, wholly optimistic: death exists, but so does beauty. It is a landscape painting, but it is also an anatomical painting, a highly detailed rendering of a skull, a distant cousin of Dorothy Foster Chubb’s work. Does O’Keeffe mean to suggest that this horny visage of death, with its many-tentacled antlers reaching in all directions, hangs ominously and inescapably over the land? The land, after all, does appear barren. But, no, O’Keeffe has celebrated the New Mexican landscape in too many paintings for us to think that this is a land of death. And the clear blue sky is full of light. No, O’Keeffe’s image reaffirms life. It invites the viewer to feel that it is for work like this that we make the attempts we do to prolong human existence.

While searching for the Dix gas-mask drawing on Google Images, I came across this disturbing photograph, 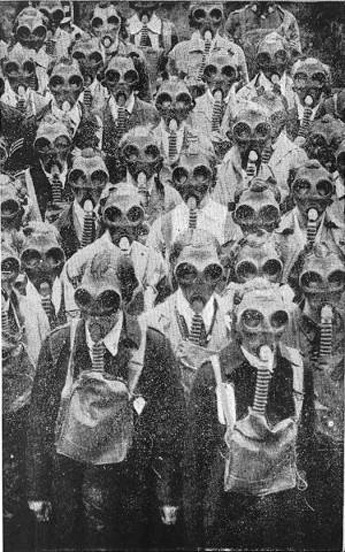 which immediately made me flash on the common popular depiction of alien life forms. 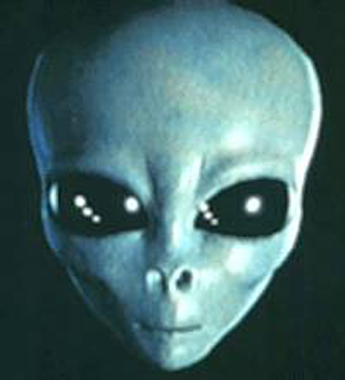 Of course! Where else would that image of the ultimate other come from if not from the collective consciousness of a generation that in World War I had been uprooted from their homeland and plopped into a completely alien landscape? One day they were on farms in New Jersey or Indiana or Oklahoma, and next they were in trenches up to their knees in water in a world of mud and barbed wire, getting attacked by people (well, they were shaped like people) dressed in a uniform gray or drab green, depending on their division, who, thanks to their gas masks, had enormous eyes. And they were scary! (Dix was German and he made the stormtroopers scary as hell.) Of course, after World War II, when the fear shifted to the invisible threats of communism and the atomic bomb, a generation of young artists, who had grown up on their fathers’ war stories and who had been through a war of their own where gas masks were still a required accoutrement (“designed for living,” as one World War II poster declared), would design the threat from beyond as little green or gray men with enormous eyes! In their own experience, that’s what aliens looked like! I netjumped over to Wikipedia to check out my theory and was surprised to find that no one else seemed to link the gas mask to alien imagery. But the truth is out there.

Wow. I have virtually nothing to add to this exemplary (and quite haunting) piece of convergent free association, except perhaps to refer visitors back to Convergence No. 32, with its thoughts on the way William Harvey’s original theories on the circulation of blood through the heart provided a metaphor with far broader implications. Bravo.