With raw sienna crushed by fist
in mortar, umber ground
to tender shadow to flesh,
Michelangelo binds a body,
mid-thrash, to the plaster,
its death flex throwing a heel
into the sheets, a bare arm
up at the drapery tempered
with cochineal red. In this Sistine
pendentive, Judith and her hand-
maid carry the artist’s head away
on a dish, buckle at the knee
as if unable to bear fully the weight
of a skull hewn from the whole
of a man. On the mural opposite,
Michelangelo offers his skin
to the Last Judgment, hangs his face
elastic, lacking eyes or mass,
upon a martyr’s fingertips. All
around the Redeemer, bodies vault
towards the clamor of heaven, plead
with their thresh and flail to render
themselves apart from the damned,
rowed towards a waiting maw.

These are the men Vesalius halves
and digs into: criminals fresh
from the Paduan gallows, gifts
of the executioner’s axe. Unfolding
the heads of petty thieves, he laces
what nerves and veins he finds
within their sutures into a crown
shooting skyward. He figures
a new man from their bared
tributaries, writes of arteries
as latticework. When the anatomist
poses for his portrait, he instructs
apprentices to draw him directly
from nature, beside a body opened
at the wrist, his fingers gracing
the exposed vessels of the lower arm.

Another superb entry from our friend the poet R.A. Villanueva (who careful contest aficionados will remember from winning entry #33, the diabolically clever “Lithographica”). Readers of the poem will likely want to see Judith and her handmaid carrying Michelangelo’s own head away on a dish on the wall opposite the Last Judgment:

And perhaps a detail of the artist’s flayed skin hanging from the martyr’s (St Bartholomew) fingertips to Christ’s lower left in the Judgment itself: 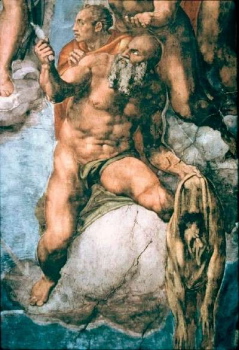 And perhaps as well the specific portrait of Vesalius palming the dissected corpse’s exposed lower arm: 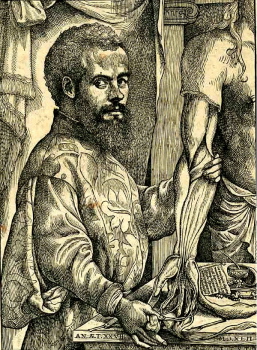 With regard to this last, which graced the first edition of Vesalius’s masterwork, De Humani Corporis Fabrica, printed in Basel in 1543, it is thought to be the work of Jan van Calcar, who was also responsible for the frontispiece which Mr. Villanueva so powerfully pairs with the Michelangelo Last Judgment above. The flayed hand in the etched portrait is in turn, of course, reminiscent of the similarly flayed arm in Rembrandt’s Anatomy Lesson of just under a century later (1632). 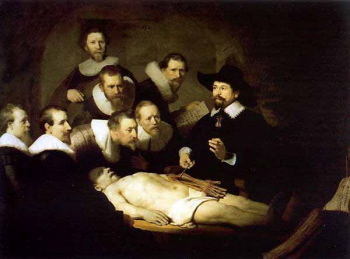 Indeed so much so that one is given to wonder whether Rembrandt had the Vesalius portrait in mind (he would have certainly known of the legendary book). I myself discussed the flayed hand in the Rembrandt painting in some detail in Everything that Rises (pp. 171-7). Suffice it to say here that in both portraits, the artist in question keys in on the marvels inherent in the musculature of arm and hand, the very appendages that make portraiture itself possible.

As for Mr. Villanueva’s original comparison of the Michelangelo Sistine Last Judgment, finished in 1541, with van Calcer’s frontispiece for Vesalius’s De Humani Corporis, published just two years later, I would simply concur in his observation, conveyed in a subsequent communication, of the uncanny rhymes in terms of physical placement within their respective images, of Christ with his arm upraised in the Michelangelo and the death skeleton with its arm upraised in the van Calcer; and likewise Michelangelo’s flayed body in the Last Judgment, with the dissected corpse splayed on the tabletop in the van Calcer. In its earliest days, modern anatomy took shape in a world still profoundly infused with eschatological anxiety: the anatomist probing in the viscera of a corpse whose soul had already departed toward final judgment. (Would body and soul ever be reunited, and if so, what of all the violence being done to these specific bodies, albeit those of criminals?)

Speaking of last judgments, it’s worth noting that Michelangelo and Vesalius were virtually exact contemporaries. Michelangelo was born in 1475 in Tuscany; Vesalius was born just under forty years later in 1514, in Brussels. But both died, within months of each other, in 1564, Michelangelo in February, aged ninety, and Vesalius, on October 15, drowned in a shipwreck during a return voyage following a pilgrimage to Jerusalem!