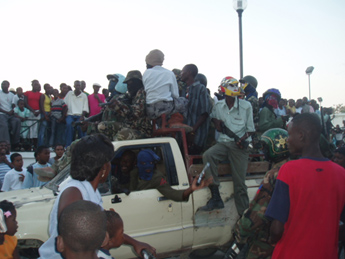 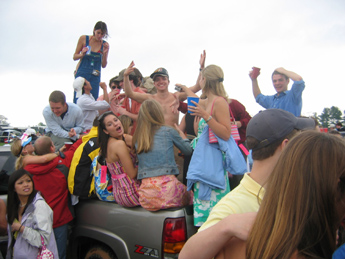 The image on top is courtesy of a buddy of mine who is currently in Haiti. He’s been there since a little after we graduated from the University of Virginia last May. My friends and I won’t hear from him for weeks at a time but occasionally we get a hurried e-mail cataloguing the crazy things he’s seen in the weeks since his last correspondence. This time, we were provided with a photograph typifying his daily sightings. Haiti has been in politico-social strife for years but recently the violence has escalated due to a highly contested presidential election. In the picture, you can see a masked driver wielding a sidearm and other heavily armed men hanging off of the white pickup. In his e-mails, my friend says that he’s had to brandish machetes while traveling alone. This is particularly crazy because one month before he left for the violence of Haiti, he was in Charlottesville partaking in the never-ending cocktail party that is Foxfield Races. For those who are unaware of the tradition, Foxfield is an annual horserace put on by local bluebloods in a quaint valley of Virginia. Somewhere down the line it became a nice excuse for the local University of Virginia students to set up plots and to engage in excessive drinking away from their fraternity houses for a change. The lower picture explains itself: lots of drunken coeds in flower dresses, sipping strong bourbon and gingers out of their respective sorority cups, and even drunker guys, looking painfully fratty, chasing after aforementioned coeds. If I were writing a dissertation, a lengthy commentary about wealth disparities, Western excess, and poverty may have followed, but I’m not; so let the two pictures speak for themselves.

Another nice catch, albeit in this case quite a profoundly unsettling one. I am put in mind of an Eric Fischl painting from early in his career, back in 1983, see below, back in the days when desperate Haitians were clamboring aboard rickety vessels of at best dubious seaworthiness and risking their lives, and that of their whole families, on a terrifyingly dangerous passage across the straits and (if they were lucky) onto the resort beaches of a resolutely oblivious Florida, populated by the sorts of leisure guests who, in another part of their lives, might be expected to swarm the Soho openings of trendy shows like Mr. Fischl’s very own, themselves clamboring desperately to purchase canvases by the hottest new talent. 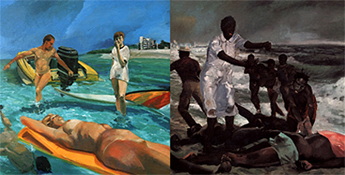