Pelvises All the Way Down.
By John Peter Rickgauer 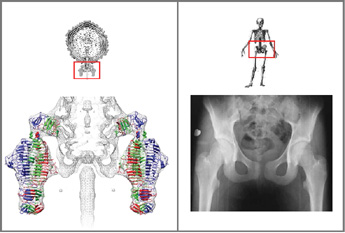 From a recent cover story in Science: cryo-electron-microscopy image of a mature virus (bacteriophage P22), composed with crystallographic protein structures, forms a pseudoatomic reconstruction of the phage P22 portal complex; it also looks remarkably like a human pelvis. The looped articulations of gp9 and gp10 are conserved in the ischium and ilium, showing a fidelity that is either perverse, exquisite, or both. It’s even got a little coccyx (about 20 angstroms in diameter).

I guess that in science, recurrent solutions are supposed to indicate an asymptote of truth, so the good news is that we may be approaching a better understanding of biological constituents (viz., they are pelvic). The regrettable cost of convergence, however, is that a really top-hole result winds up looking like phagophilic smut. (Honest, sic on the looming member.) 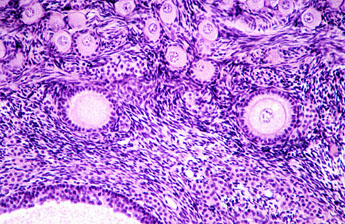 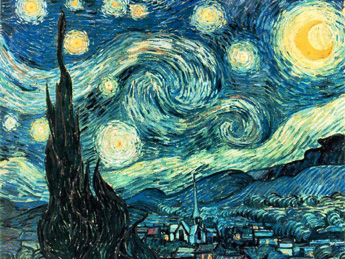 I was nearly giddy when I fell upon this histological image of an ovary and the primordial follicles within. Convergences, between it and Van Gogh’s Starry Night, abound, it seems:

One could swoon at the very high number both of stars in the night sky and of primordial follicles in all the women on earth … Are the numbers comparable?

Or, is there any possibility that Van Gogh’s inspiration for one of his most famous creations stemmed from his own pre-creation?

And it’s interesting that funding provided to further research in both subjects represented (space exploration, stem cells) is somewhat controversial. Is there something about swirls that raises hesitancy and criticism?

What also struck me, however, was the seeming fact that about half of a certain population of 20-somethings have a print of Starry Night somewhere in otherwise sparsely decorated living rooms.

Something else in the lives of about half of 20-somethings everywhere? Ovaries.

For starters, I refer both of you once again to my response to Mr. Clem, Winner No. 5, as once again I find myself being forced to observe how it is you who keep showing me all these dirty pictures. (Indeed, I am really starting to wonder about this sick little puppy of a country—geez, the things, or rather the thing, you all seem to have on your minds!)

Still, having said that, WOW, I say to Mr. Rickgauer, and then to Ms. Muñoz as well: WOW. WOW. Nice catches: bong insights, quite simply, of the highest order.

Having said that, what are we to make of this seemingly endlessly recurrent tendency of the micro to mirror the macro, and vice versa. Are we dealing finally with a statistically insignificant illusion? I.e., think of all the things ovaries don’t look like; sure, sooner or later they are bound to start looking like something, but who cares? Is it just that there are only so many patternings possible (tree and branch, leg and joint, pebble and outwelling wave, etc.), such that we needn’t be all that surprised when we keep encountering such variations from one scale to the next? Or is there some deeper significance here, some more profoundly meaningful if wispily elusive echo, burrowing to be acknowledged?

Does it matter, in this context, that consciousness itself seems to partake of the cosmic—or, at any rate, that the microscopic structure of the brain so uncannily mirrors that of the deepest reaches of the galaxy, as most recently evinced in a pair of images brought together by the editors of the New York Times Science section: 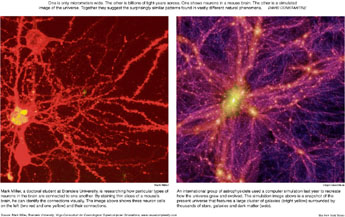 A pairing in turn reminiscent of Charles and Ray Eames’s legendary Powers of 10, that masterful 1977 short film in which, starting from the farthest reaches of outer space, they burrow in by a factor of 10 with each fresh frame, past swirling galaxies and into our own, the Milky Way with its gazillion stars, and presently into our own star’s solar system, and presently down onto our own planet, zeroing in ever tighter onto our own continent, and down onto a town on the shores of Lake Michigan, and a couple lollygagging on greensward lawn by the shores of that lake, and down still further onto the hand resting on the belly of the recumbent man, and into that hand, past tissue into cell, and deeper, into the atomic structure of that cell, twirling strands of DNA, swirling galaxies of molecules, minute solar systems of atoms, and on and on …

A sequence of images in turn reflected in physicist David Bohm’s comments a few years later in his highly influential 1980 treatise, Wholeness and the Implicate Order:

The notion that the one who thinks (the Ego) is at least in principle completely separate from and independent of the reality that he thinks about is of course firmly embedded in our entire tradition. General experience … along with a great deal of modern scientific knowledge … suggest very strongly that such a division cannot be maintained consistently …

Clearly, this brings us to consider our overall worldview, which includes our general notions concerning the nature of reality, along with those concerning the total order of the universe, i.e., cosmology. To meet the challenge before us our notions of cosmology and of the general nature of reality must have room in them to permit a consistent account of consciousness. Vice versa, our notions of consciousness must have room in them to understand what it means for its content to be “reality as a whole.”

One doesn’t have to be a physicist, though, to wonder, lollygaggingly, at all those pattern rhymes at the far ends of the infinite spectrum. What kid hasn’t at some point noted the way that solar systems and atomic clusters mirror one another and then gone on, in bonglike revery, to wonder whether … well, you know.

Dan O’Neill, the sublimely trippy cartoonist whose countercultural strip Odd Bodkins graced the pages of the (almost equally trippy) San Francisco Chronicle across the early ‘70s, perfectly captured the tenor of such bongy reveries in a subplot to one of the chapters of his seminal masterpiece, Hear the Sound of My Feet Walking Drown the Sound of My Voice Talking, in which the author’s stand-in, Hugh, suddenly gets visited by a truly harrowing thought: 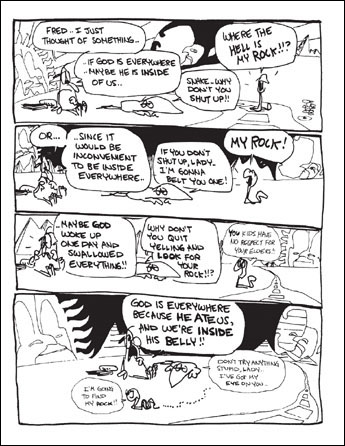 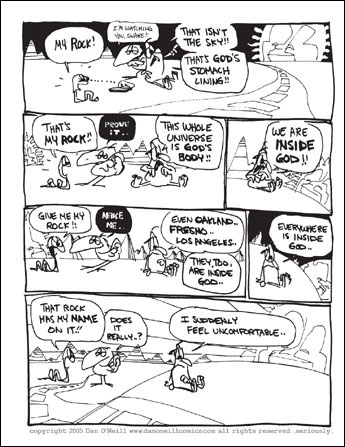 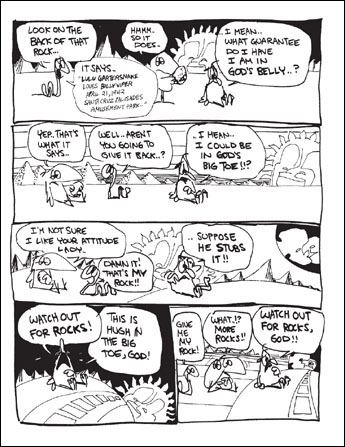 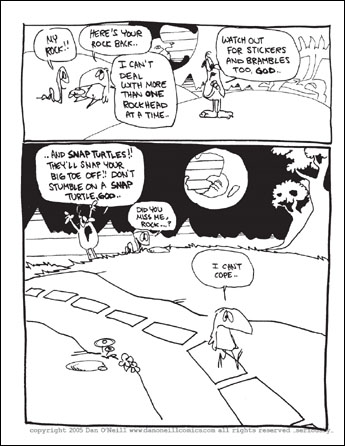