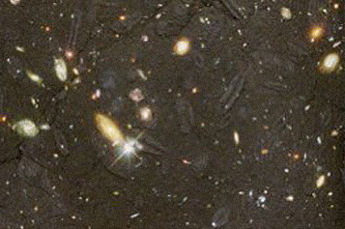 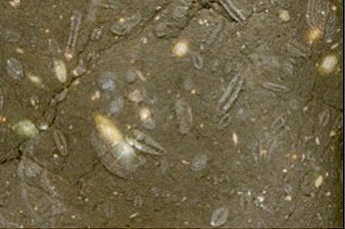 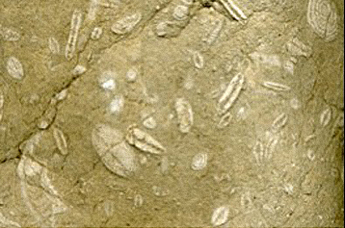 Michael Benson, American filmmaker, resident in Ljubljana, and compiler of the remarkable photo album Beyond: Visions of the Interplanetary Probes, supplies the following gloss to the foregoing array:

It has been said—and I’ve lost track of exactly where and by whom—that everything that rises must converge. But isn’t it really the other way around? Doesn’t everything that descends to Earth (photons, X-rays, meteorites, the odd fragmenting space station wreathed in orange-red fireballs)—in fact, everything visible, everything in existence, Every Single Thind—doesn’t it originate from and trace its lineage back to a single infinitesimally small pinpoint of infinite energy? Converging on that pixel as we hit rewind, it (and here let’s immediately move time forward again) explodes, spraying matter and energy in all directions, making a rapidly expanding bubble in the immaculate, inexplicable, infinite blackness. Thus creating everything we know and can see, or smell, or touch, or hear: all space-time, from neutrons to novas to nodding mountain blossoms and Adriatic pebble beaches, albeit across a stretch of time we estimate to be about 14 billion years.

And there was light.

In other words, hasn’t everything that has ever been and ever will be (at least in this particular universe, itself perhaps an insignificant flume in a far greater and more complex multiverse)—hasn’t everything resulted from a convergence of causality backward in time upon a single point? Yes, it rises and converges, into and onto a cryptically folded, nested jot—wherein and wherefrom trying to make a point (for example, one containing such a seemingly all-encompassing story in a few paragraphs, or, for that matter, in a few compressed JPEGs) is as foolish, even hubristic, not to say godlike, as it is unavoidable.

The attached pictures render it (I think) indubitable that the enigmatic smile of the cosmos, in all its macro- and microscopic machinery, is indeed Universal. Meaning: all things great and small stem from and encompass the same distant point. Meaning: the principles governing the Vast (and, so we like to think, Inanimate) apply the same fascinatingly tricksterly methodologies to the Small (and, as we language-slinging living beings self-regardingly put it, Animate). Meaning: everything converges, be it rising, falling, or slumped unconscious in the corner. So let these offered Universal Pictures replace the humbly spinning studio-logo globe of our provincial planet with something more in keeping with what we Now Know, itself a tiny subset of what we (with some luck) will One Day Know.

At the top, we have the first of the famous Hubble Deep Field series, a core sample deep into space-time. Oriented toward the constellation Ursa Major and made during a 10-day period in late December of 1995, it consists of 342 separate exposures cumulatively revealing a scattering of mesmerizingly candy-colored (due to red shift) and multiform (due to gravitational interaction) galaxies. The galaxies depicted, each with its flaring jewel-like star arrays, existed within 1 billion years of that vast originative bang—meaning they’re only 1/14th of the distance from the starting gun of the universe.

Descending, they dissolve inexorably into formations discovered just a couple summers ago directly above one of those pebbly, sun-dappled earthly beaches—in this case, on a fossil-bearing rock dating from the Eocene (circa 50 million years ago) and found fragmenting from the eroded karstic limestone of that latter-day Adriatic isle Rab. (And then, of course, they dissolve right back.) Bound as we are in a nutshell, counting ourselves kings, I propose we not try too hard to understand rationally the exact nature of the umbilical link between these practically indistinguishable (and yet very different) images—one a seething atomic-powered swarm of glittery fossilized galaxies captured by an Earth-orbiting telescope; another in effect a photograph of a photograph, specifically a digital scan of a no less fecund and thriving array of spiraling fossilized shellfish, all of them captured by the frozen energy of earthly mineral matter assisted by deep time.

Yes, one predates the other by more than 12 billion years. Yes, the sweep of time between that infamous largish bang and the resulting spin of all those galaxies in relation to time’s total hitherto is roughly equivalent, as a percentage, to the elapsed time between those (long-gone, yet somehow still there) maritime organisms and our (currently present, yet seemingly spiraling fumingly into extinction) civilization in relation to the total history of animal life on Earth. But their eerie revelatory synchronicity, which is capable of raising hairs, the mystery of their convergence, the kinetic whirling-dervish ecstasy of their dance, ultimately eludes understanding. It vibrates without cease or final answer, written amid multiple awe-inspiring possibilities in shore and stars alike.

One of my favorite reviews of Everything That Rises described it as Bong Literature of the Highest Order, but I have to hand it to Mr. Benson: his take on things is clearly Higher, Far Higher Yet.

What more to say, except that two other recent contest entries provide some pretty potent glosses of their own. The first, from Brian Christian of Seattle, Washington, aligns these two images

and reads as follows:

Stumbling into this diagram of the Earth’s magnetosphere, I was immediately struck with how easily the figure could pass for one of the human eye. All the way down to the optic-nerve-like “neutral sheet” and the fibrous, connective-tissue-esque “polar cusps,” the structural parallels are startling. Like the architecture of vision, the magnetosphere is rounded and blunt toward the light and tapers on the far side into a tail that extends into the dark. One noteworthy exception—it’s the magnetosphere’s task to keep radiation out, and the eye’s job to let it in.

Which I think you will agree is not half bad. And, for that matter, opens things to a whole new dimensional interpretation. Yes, qua Benson, the far, far distant and the immediately at hand, the macro and the micro, do indeed rhyme, over and over again, but perhaps only to the human eye, or the human mind, located, as it were, midway along, though at a perpendicular angle to, that far-out/far-in spectrum. Or, phrased differently, as we have already suggested in an earlier entry (see my response to Contest Winners Nos. 18 and 19), tiny, puny, contingent human consciousness contains universes of insight—and perhaps no wonder, given the structure of the brain itself—a point made all the clearer by yet another fresh submission from the redoubtable Walter Murch, to wit:

The neuronal structure of the brain. 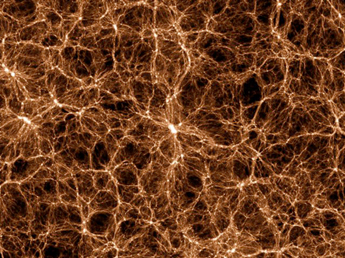 The galactic structure of the universe.
Each of the points of light is a galaxy.