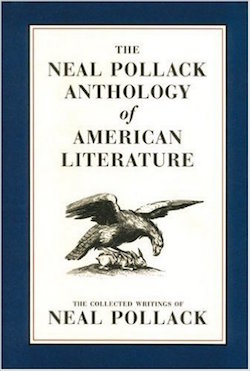 Today marks the 15th anniversary of the publication of McSweeney’s first book: The Neal Pollack Anthology Of American Literature, The Collected Writings Of Neal Pollack. To commemorate this milestone event in American literary history, we’ve commissioned free essays by the legendary John Hodgman and the even more legendary Neal Pollack himself. Please celebrate this seminal event with us by reading their essays, and then by buying the Anthology or at least watching a YouTube video related to it. Thank you.

Sixteen years ago I was still a professional literary agent, and I spent most of my time at the office looking at websites.

Bear in mind that looking at websites at work was still a pretty new thing to do in the year 1999. Print publication of books and magazines was still a going concern, but there was a suddenly a lot more concern than going. The internet clearly posed both an existential threat to publishing and an existential boon to the world wide web of creators who could suddenly sidestep our long gatekeeping mission of deciding who would and who would not be memorialized by smashing their words onto pulped wood.

So looking at websites in the year 1999 was important work, a critical probing of an emerging new culture of ideas, and not just a way to waste time because you disliked your job and are scared to leave it, like you’re doing now. But to be honest, for me, it was also that.

Then one day that year, I looked at a website called McSweeney’s, and I read a fake magazine essay by Neal Pollack called “I Am Friends With a Working Class Black Woman.” It’s still one of the funniest things I’ve ever encountered, and extra funny for its brash bravery. Long before the great white privilege discussions of gamergate, Neal bared the arrogance of the many white dudes who believe the world NEEDS to hear what they have to say (both in and out of journalism) and hilariously flayed it. The best satire is that which reveals an absurdity you never noticed yet instantly recognize, and is funny while doing so. And that is what Neal Pollack is: the best satire.

And so I contacted Neal and asked him if I could be his literary agent, and Neal agreed, thus sealing his doom. For at that time, traditional publishing recoiled from the idea of smart humor deployed under cover of the fictional persona of a deranged, self-congratulatory blowhard, and I was neither powerful nor psychic enough to tell them: don’t be stupid! Soon there will be Stephen Colbert!

And so I negotiated a hot advance of zero dollars to allow Dave Eggers and McSweeney’s to publish Neal’s Anthology in a lovingly constructed hardbound edition, with pages and silk bookmark hand woven by Icelandic elves. In Neal’s semi-self-publication, and his tirelessly innovative (and tiring) tour that followed, the Anthology embodied that cultural shift that I had looked for in websites and would define the business of making art in the next 15 years: the DIY movement; the unseating of corporate publishing and distribution; and the need to engage your audience personally, whether greeting them in a bookstore or reading to them in Katz’s deli.

Neal’s publication of the Anthology would seal his doom number two, at least as far as our professional relationship would go. Inspired by his fearlessness, his inventiveness, and the fun he managed to have amidst all the sweat work, I finally owned up that I wanted to be on his side of the equation. I quit my job as an agent, and I soon developed a deranged blowhard persona of my own: that of a Former Professional Literary Agent and expert on all things — a voice for which I owed such an obvious debt of inspiration to Neal that I never did acknowledge it. That was a mistake, and I apologize. Neal: working with you utterly changed the directory of my work and life, and I am deeply grateful.

Neal continues to be an absurdly talented and prolific humorist, journalist, and novelist. You should buy and read all his work. But there is something especially mad and essential about the Anthology, and I’m glad those internet websites I mentioned before will allow you to read it right now. Fifteen years ago, Neal Pollack was 15 years ahead of his time. That’s something that’s hard for an author to really enjoy when he’s reading to half a dozen people in the bathroom of 30th Street Station in Philadelphia in the year 2000. Now that we’re all caught up to him, he and you and I can all enjoy it together.

Thank you, John, for that warm and affectionate introduction. It’s always nice to hear praise from lesser literary lights, as it confirms my status at the top of the hay pile. I’m especially pleased that I inspired you to pursue a career in acting, though I’m surprised you’re still at it; you were old even at the time of The Paper Chase. I enjoyed your recent guest turn as “Wacky Nerd Inventor Love Interest #2” on Mike and Molly, the defining sitcom of our times.

And now, here we are, face to face, a couple of Silver Spoons. It’s hard for me to believe it’s been 15 years since I bestowed a favor upon an unknown young writer named Danny Eggleston, allowing him to publish a generation-defining anthology of my greatest works. Since then, Eggleston has done a tremendous job of saving the world’s children through literature and warning us about the dangers of the Internet, while my dominance has continued without even a municipal easement to stand in the way of its manifest destiny.

Since 2000, I’ve published my own visionary trilogy of novels warning us about the digital menace. First came The Web Ensnares Us All, then The Book Of Dumbers, and, finally, Chastity: A Girl Of The Internet. In addition, I visited the 9-11 development site and wrote a withering essay for The New York Review Of Essays, which I later turned into a monograph that is now in the Smithsonian. (Full disclosure: I have had non-monogamous sex with every single National Book Award and Booker Prize juror this year).

I’ve been to Iraq three times, once on vacation paid for by Conde Nast Traveler, and Afghanistan twice. The hotel accommodations were adequate, the food inconsistent. I wrote a prescient novel about race relations called Black Lives Matter, a phrase I coined but didn’t copyright, and was the first person in print to call for the legalization of gay stoned marriage. There was also my metafictional novel with a novel, Novel: A Novel, as well as a three-volume autobiography, written in the original Swedish, called My Bowel Movement. Perhaps you also saw the movie about my life, The Tour Never Ends? I thought Paul Rudd did a fantastic job playing the younger me, and that Channing Tatum made a nice stab at my current incarnation.

And that’s just the penile tip of a decade-and-a-half of literary productivity unparalleled in my generation, or any generation. Just look at what’s happened since the Anthology. Updike: Dead. Vonnegut: Dead. Mailer: Dead. Sontag: Dead. Havel, Marquez, and some other writer: All dead. Vidal: Dead and discredited. Roth: Retired. Oates, Didion, and Ozick: Alive and withered, like Stygian witches, still proclaiming curses from their blasted heath, a problem I wrote about in my visionary book of ideas, The Rise of the Gynocrats, which spent 17 weeks on the New York Times nonfiction bestseller list and 37 weeks unread by Barbara Walters’ bedside until her maid threw it away.

And yet still I write on, unencumbered by age or pain, thanks to the magnificent salves cooked up every day by my beleaguered manservant Roger and a strange painting that I stare at in my basement every evening. From my perch at the top of Mount Winchester, I can still hear the eagles cry. I watch the world burn and the seals beach themselves, but always, I write, write like I have never written before, because writing is the written word, and the written word is good. I must tell the world my stories about myself. A writer is the fulcrum of the human experience. Also I need royalty checks to help fund the brandy shipments.

All this will be revealed and more next year in my autobiography, A Man Full Of Himself, in which I finally recount my epic battle with Norman Mailer in Manila. Three prostitutes died, and yet I’m not sorry, because it wasn’t my fault. Doubt me at your peril.

I must warn you all, Franzen, Vollmann, and Paula Hawkins, author of The Girl On the Train, the finest and most subtle novel of our times: I am not done yet. I will never be done. I will bury you and your children. Now, and forever, I remain the greatest writer in the world.

Roger! Where is my birch tea?

Read more of Neal Pollack’s work in our archives.