While struggling to finish the screenplay for her latest movie, Miranda July found the perfect displacement activity: she began to obsessively read the PennySaver. Who was the person selling the “Large leather Jacket, $10”? Working with photographer Brigitte Sire, she decided to find out, and together they sought out 13 sellers. It Chooses You is July’s off-kilter, surprisingly moving story of procrastination and inspiration, isolation and connection. In her inimitable way she has come up with an original concoction that the Guardian deemed “something substantive and extraordinary.”

Nota bene: Now Miranda July’s It Chooses You is available as a resplendent paperback. And as we kick off the second week of our Back-to-School Sale, we’re not just highlighting the brand-new paperback—we’re celebrating the book with signed editions (in hardcover or paperback —whichever suits your fancy). And while you’re perusing the limited edition goods, this is a good moment to note that we’ve got signed Wholphin No. 1 or the Best of Wholphin, which feature July’s “ARE YOU THE FAVORITE PERSON OF ANYBODY?” (starring John C Reilly, Mike White and Miranda July herself) this week only! Get these rare editions while you can!

It was wonderful to have this opportunity to leave my cave. I packed a bag with yogurt, apples, bottles of water, and a little tape recorder. It was the kind that used mini-tapes; I’d gotten it when I was twenty-six in order to listen to the tapes the director Wayne Wang sent me after he recorded our conversations about my sexual history as part of his research for a movie he was making. I had always thought of this as a rather creepy exercise that I’d participated in for the money and because I liked to talk about myself. But now, putting the tape recorder in my purse, I felt a little more sympathetic. Maybe Mr. Wang had just wanted to talk to someone he hadn’t made up. Maybe it was a casualty of the job.

I drove to Michael’s with a photographer, Brigitte, and my assistant, Alfred. Brigitte had met all my family and friends, but I hadn’t known her very long, or very well—she was our wedding photographer. Her photographic—maybe I was a journalist or a detective, who knew?—equipment legitimized this outing in my mind; Alfred was there to protect us from rape.

The address was a giant old apartment building on Hollywood Boulevard, the kind of place where starlets lived in the ’30s, but now it was the cheapest sort of flophouse. It’s not that my world smells so good—my house, the houses of my friends, Target, my car, the post office—it’s just that I know those smells. I tried to pretend this too was a familiar smell, the overly sweet note combined with something burning on a hotplate thirty years ago. I also tried to appreciate small blessings, like that when we pressed 3 on the elevator, it went up and opened on a floor with a corresponding number 3.

The door opened and there was Michael, a man in his late sixties, burly, broad-shouldered, a bulbous nose, a magenta blouse, boobs, pink lipstick. Before he opened the door completely he quietly stated that he was going through a gender transformation. That’s great, I said, and he asked us to please come in. It was a one-bedroom apartment, the kind where the living room is delineated from the kitchen area by a metal strip on the floor, joining the carpet and the linoleum. He showed us the large leather jacket and I felt a little starstruck: here it was, the real thing. I touched its leather and immediately got a head-rush. This sometimes happens when I’m faced with actualities—it’s like déjà vu, but instead of the sensation that this has happened before, I’m suffused with the awareness that this is happening for the first time, that all the other times were in my head. 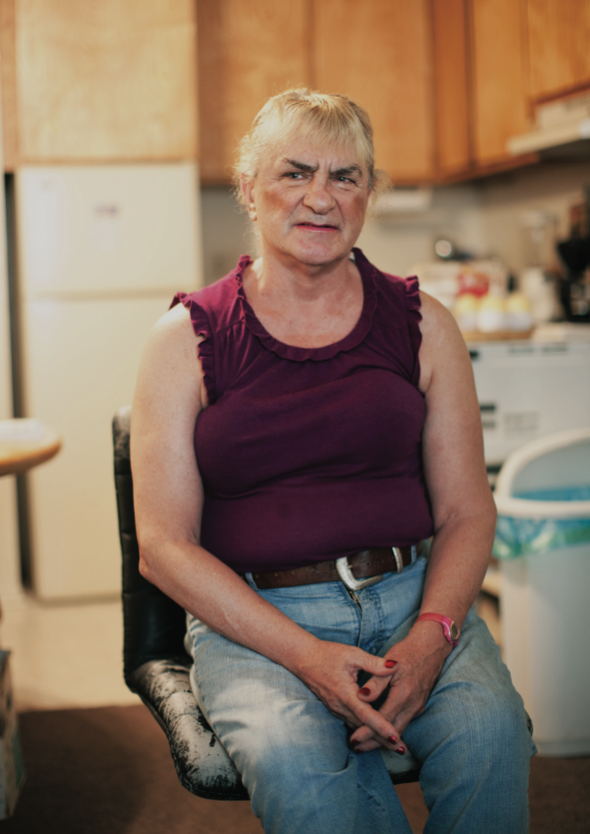 We murmured admiration for the jacket, which was entirely ordinary, and I asked if I could turn on the tape recorder. Michael settled into a medical-looking chair and I perched on the couch. I glanced at my questions, but now they seemed beside the point.

Miranda: When did you begin your gender transformation?

Miranda: And when did you know that you—

Miranda: So the first time you came out must have been hard. You must not have had a good experience?

Michael: It wasn’t hard. I just decided to do it, and I don’t know why I went back in the closet. It’s one of those psychological things that I’m going to a psychologist to work out.

Michael spoke softly and with a sort of evenness that made me wonder if he was a little bit drugged. Nothing crazy, maybe just some muscle relaxers to take the edge off. The thought calmed me—I was glad there was some padding between him and my invasive questions. I wished I was on muscle relaxers too.

Miranda: What was your life like before you came out?

Michael: I was trying to be the same as every other man, and hiding the fact that inside I felt like a woman. I knew that when I was a child, but I had this strong fear of coming out for a long time. The movement for gay people to come out helped me realize that I shouldn’t do that.

Miranda: What did you do for a living?

Michael: I ran my own business as an auto mechanic.

Miranda: What do you do now?

Michael: Now I’m retired.  Miranda: What are you living on?

Michael: On Social Security benefits. This is a Section 8 building, so rent is very reasonable. And before this building I lived in the cheapest rooming house in Hollywood.

Miranda: And how do you spend your days?

Michael: I go shopping and watch television, and I go for walks for my health.

Miranda: What shows are your favorites?

Michael: The Price Is Right and the news.

Miranda: And do you feel like you have a community here?

Michael: I do have a community. I’m going to Transgender Perceptions meetings every Friday at the Gay and Lesbian Center on McCadden, and there’s a bunch of other transgender people that go. Male-to-female, female-to-male. There’s two I met there that had their major surgeries forty years ago.

I asked if we could look around his apartment and he said sure. Michael stayed seated and watched us as we walked around, quietly peering at everything. 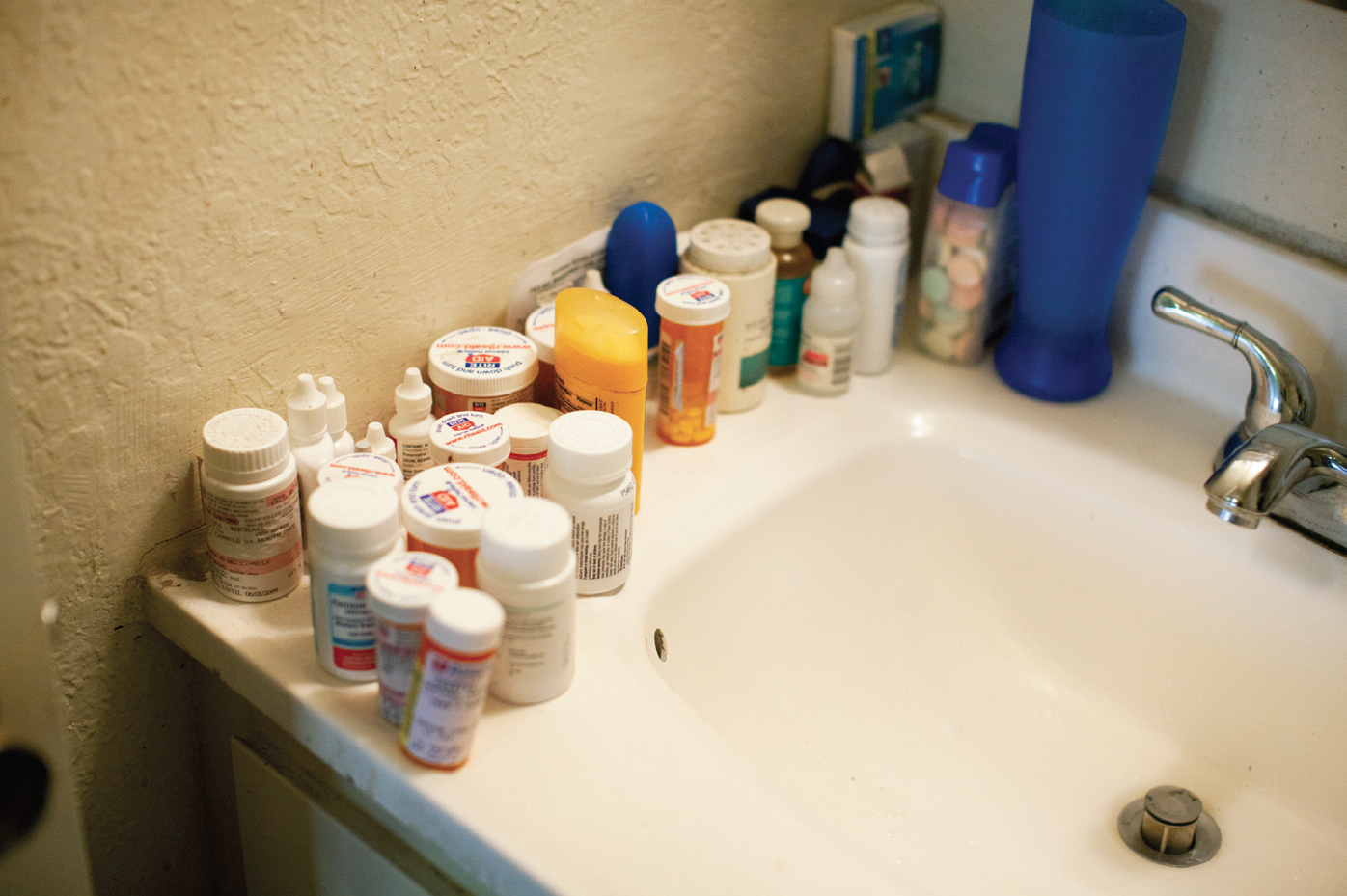 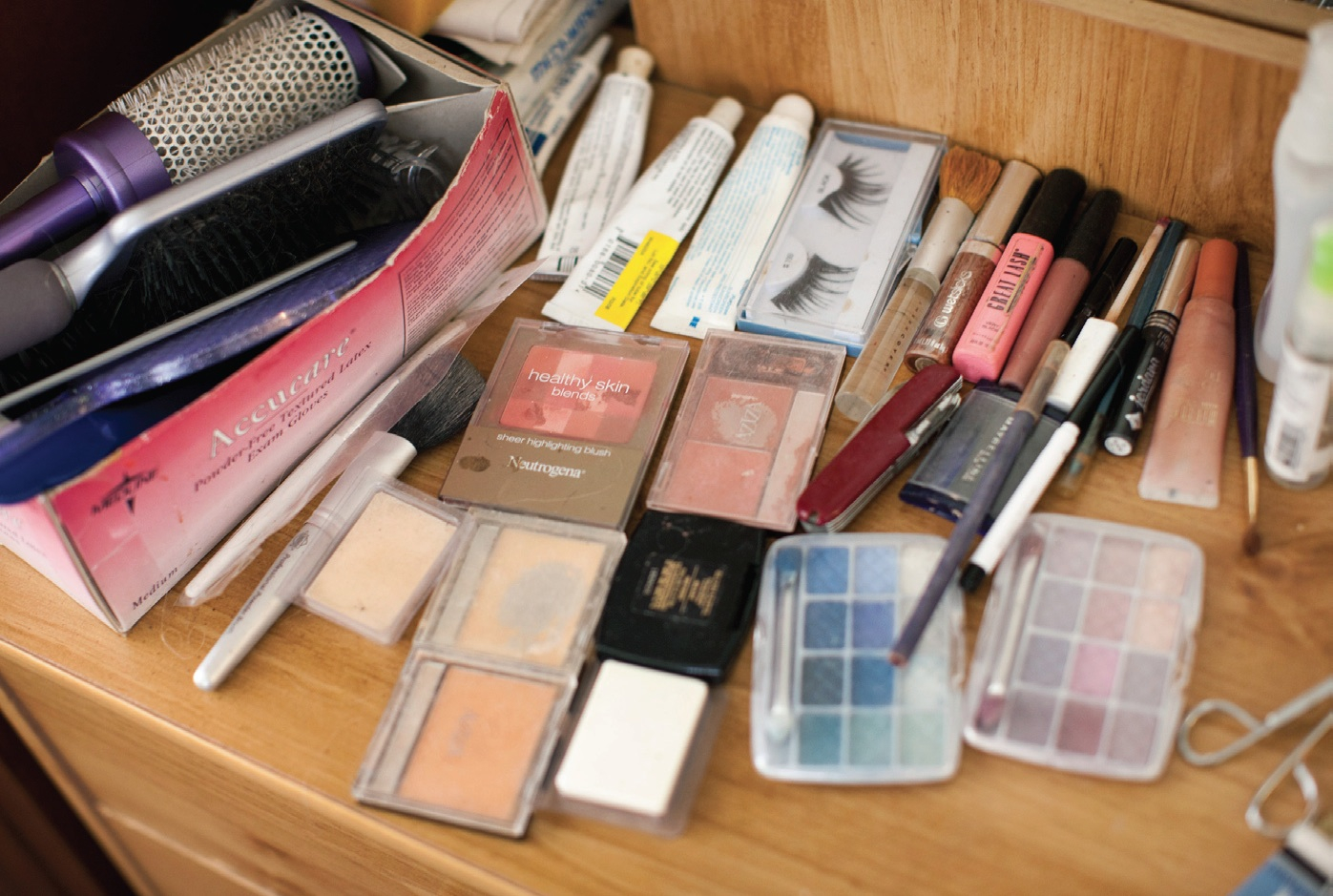 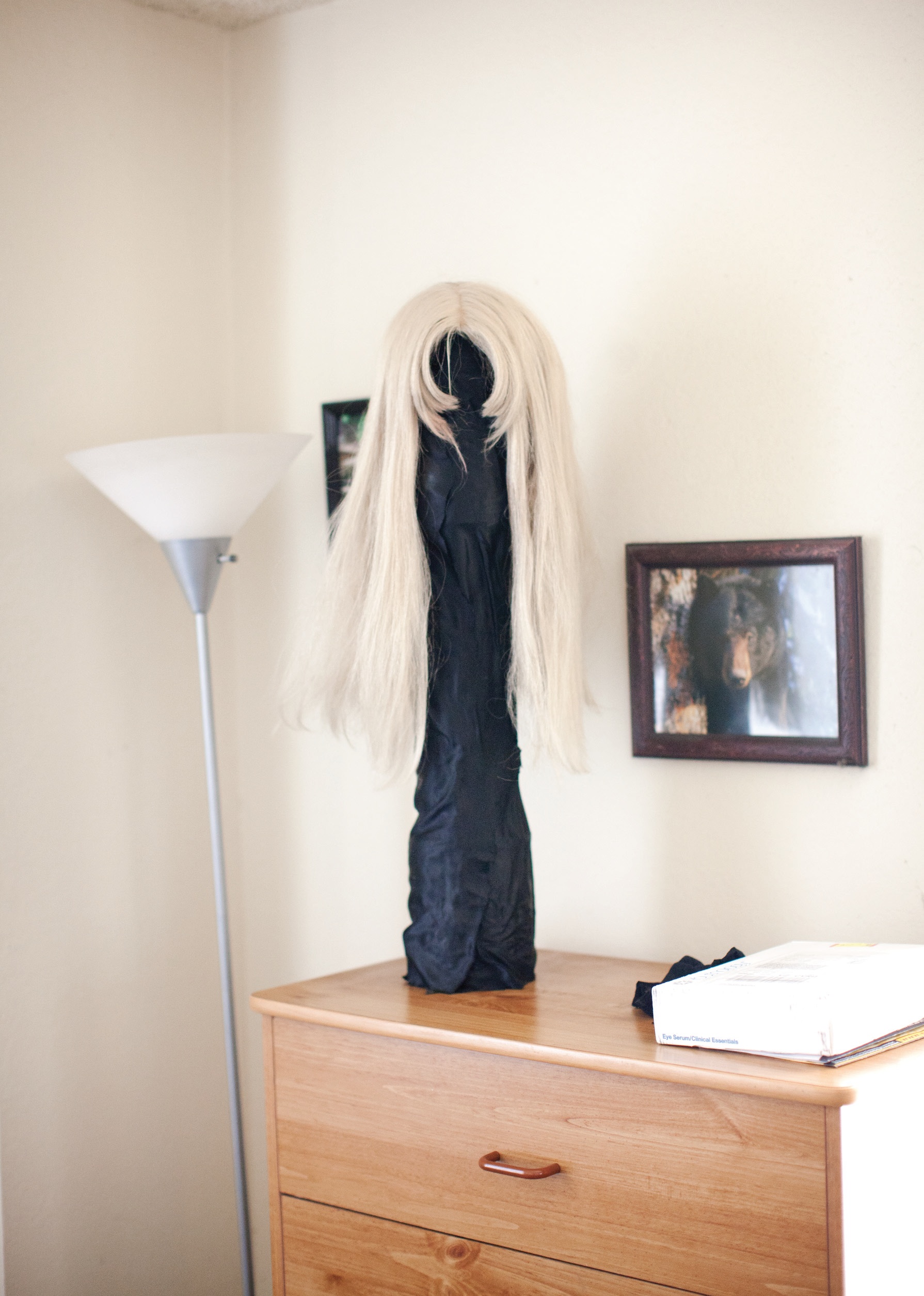 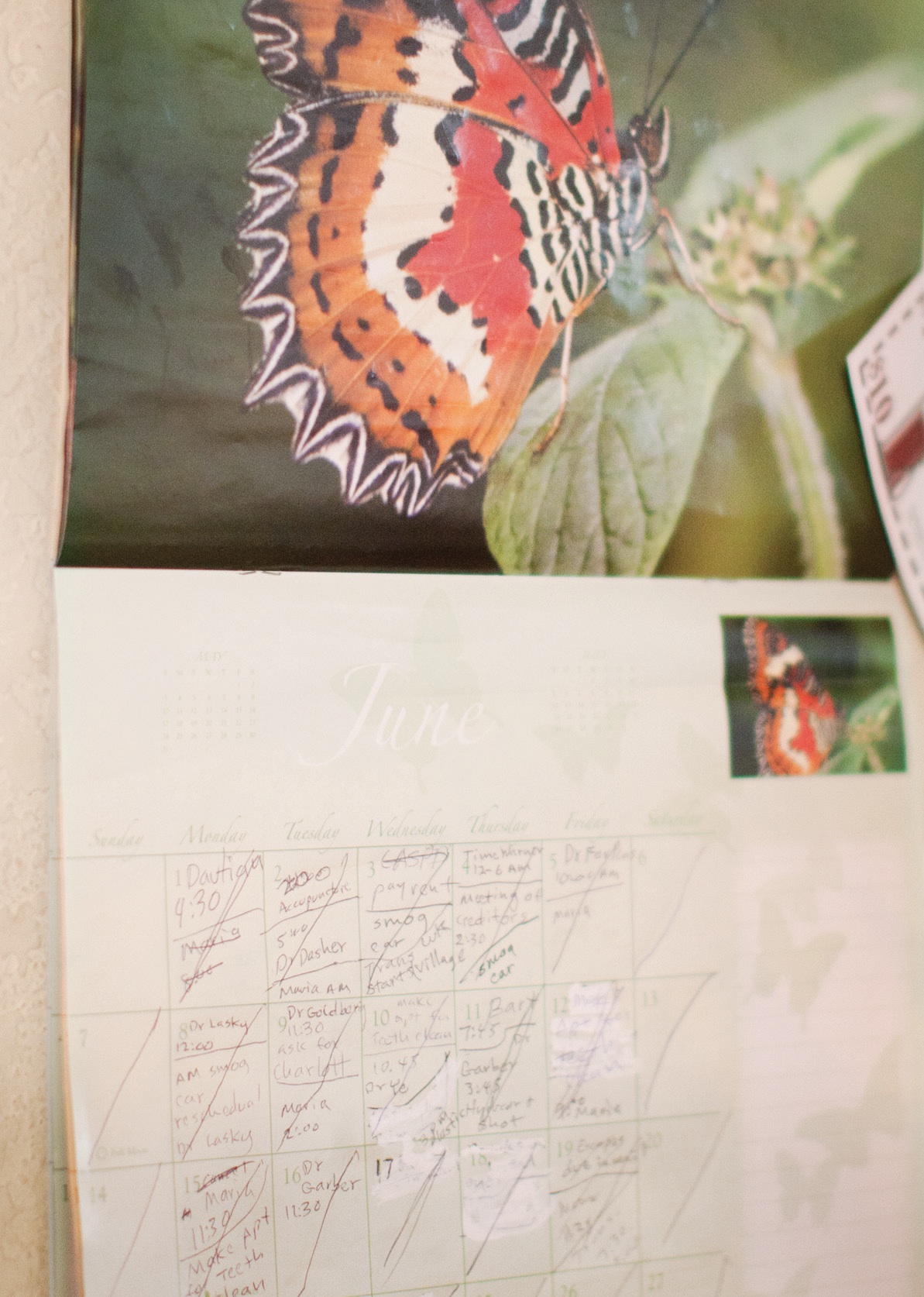 It reminded me of being at a garage sale, the rude feeling of surveying someone’s entire life in one greedy glance. Every few seconds I raised my eyebrows with reassuring interest, but Michael was not concerned.

Miranda: Can I look at your movie collection?

I nodded and smiled warmly to indicate how okay I was with pornography.

Michael: You can look through it.

Michael: Well, there’s straight pornography and there’s trans pornography. There’s also some pornography with she-males too. And that’s about it.

This answer just created more questions, but I was too shy to ask them. I took my pre-written questions out of my pocked.

Miranda: Have you ever had a computer?

Michael: No, I’ve never had any computers. I may get one someday. I use the computer at the library.

Miranda: Is there anything you want that you worry you’ll never have?

Michael: No, not at this age.

Miranda: You feel like you’ve come to peace with things?

Miranda: And what would you say has been the happiest time in your life so far?

Michael: Oh, I just enjoy living. I’m always happy. I can’t say between one or the other which is the happiest time. I never thought about that.

Miranda: Not everyone enjoys living—is that just part of the spirit you were born with, or do you think your parents instilled that?

Michael: No. It’s part of my spirit that I was born with. I was never taught that idea. 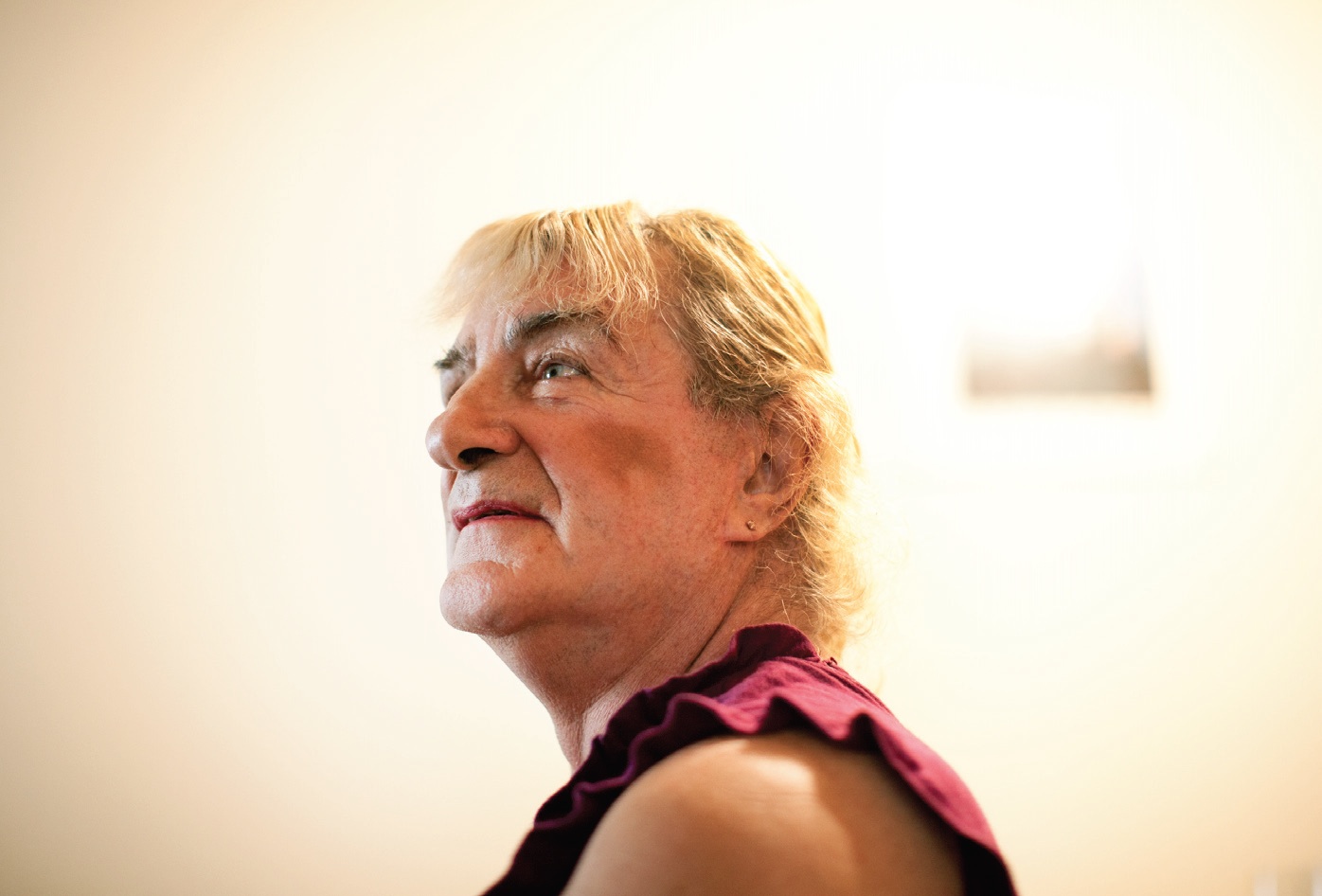 I threw a question mark at Brigitte and she nodded yes, she’d photographed everything. So we said goodbye to Michael, nervously heaping on parting graces, and silently rode the elevator back down to the first floor. We stepped out onto sunny Hollywood Boulevard, a street I drive down every day. Now when I drove past this building I would always know that Michael was in there, living on Social Security benefits, enjoying life and desiring only one last thing—to transform into a woman. His conviction ignited me. I felt light and alert. Evidence of his faith in this almost-impossible challenge was everywhere: the pink blouse, the makeup littering the bathroom, the handmade dildoesque wig stand. These were not signals of defeat. This was not someone who was getting sleepy at the end of his journey; in fact, everything he had lived through made him certain of what mattered now.

I had become narrow and short-sighted at my desk. I’d forgotten about boldness, that it was even an option. If I couldn’t write the scenes, then I should really go all the way with not writing them. I decided to remove myself from my computer and the implication that I might be on the verge of a good idea. I would meet with every PennySaver seller who was willing. I would make myself do this as if it were my job. I would get a better tape recorder and drive all over Los Angeles like an untrained, unhelpful social worker. Why? Exactly. This was the question that my new job would answer.

I had to force myself each time I dialed a stranger’s number, but I made myself do it, because this was the end of the road for me; not calling would be the beginning of not doing a lot of other things, like getting out of bed. I started with the first item for sale (a pair of matching silver champagne flutes engraved with the year 2000, twenty dollars) and made my way down the list. Most people didn’t want to be interviewed, so when someone said yes I felt elated, as if they had said, “Yes, and after you pay me fifty dollars for the interview, I’ll pay you one-point-five million dollars to finance your movie.” Because that was the other problem I was now having. In the time it had taken me to write the movie, the economy had turned to dust. Suddenly all the companies that had been so excited to meet me a year ago were not financing anything that didn’t star Natalie Portman. Which kind of brought out the Riot Grrrl in me—I walked out of polite meetings in Beverly Hills with visions of turning around and walking back in, naked, with something perfect scrawled across my stomach in black marker. But what was the perfect response to logical, cautious soulessness? I didn’t know. So I kept my clothes on and drove to the home of someone who had said yes to me, sight unseen. A woman selling outfits from India for five dollars each.