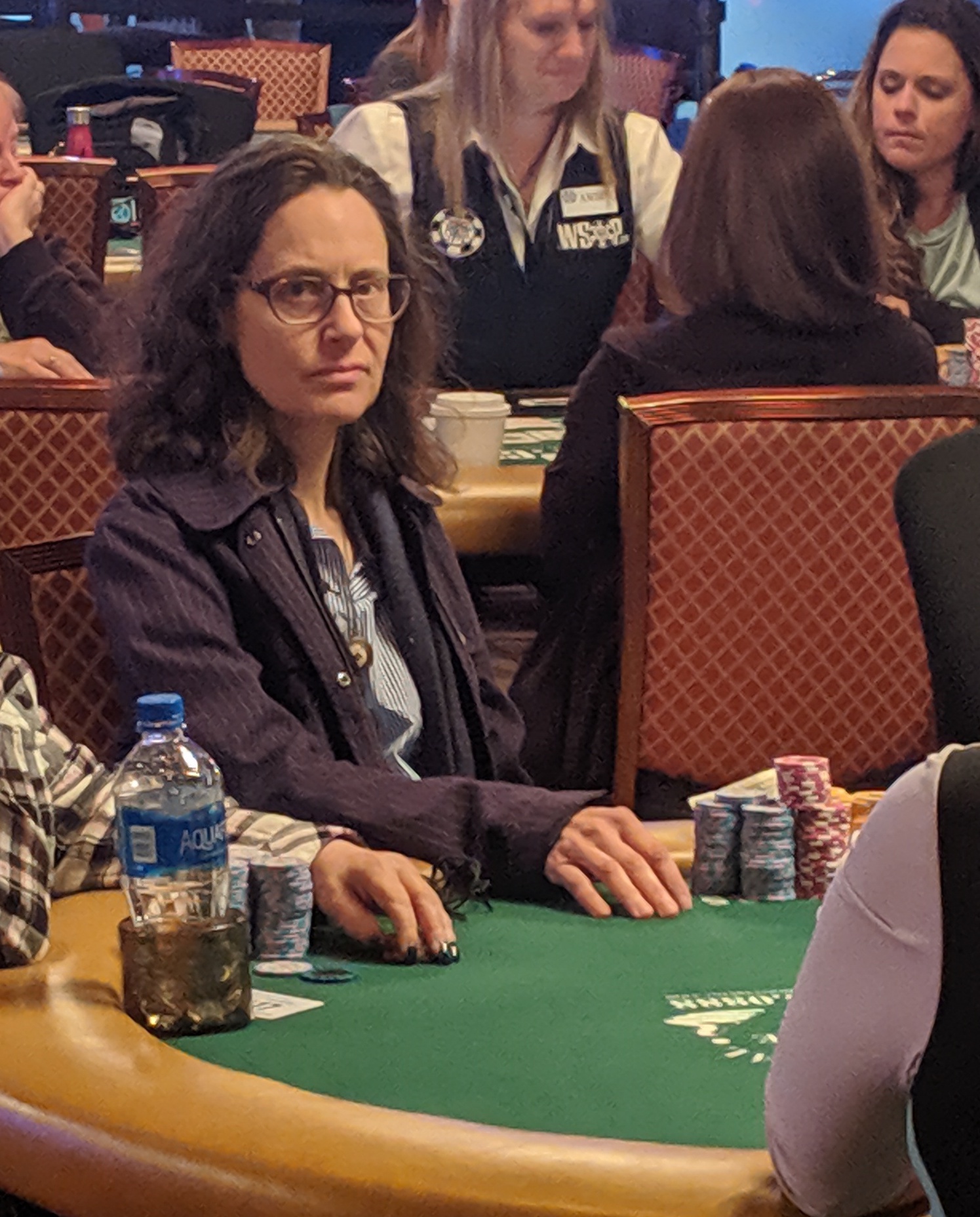 Q: You make money playing poker. How did it start?
A: In a way, I was part of the wave that started in 2003. That’s considered the beginning of the modern poker boom, because someone named Chris Moneymaker, who was an amateur, won the World Series of Poker after starting from an online game that he paid like 86 bucks for. He won millions of dollars, and people saw that and were like, “Wait a second, I have 86 bucks, I could do this…”

I thought, “Oh no, I’m completely unprepared to do this.” So I bought a poker book and I read it. Then, over the years, I got progressively more serious.

Q: How did you do at the charity game?
A: Not very well. But it’s funny now that I was so serious. It was completely unnecessary. Some people showed up and they literally didn’t even know how to play.

Q: How did you go from that to a semi-professional player?
A: I continued to play home games, to watch poker on TV. It made me want to learn a bit more. I read a few more books. I tried to change the way I played.

For years I didn’t think there was strategy. It seemed like random chance. But I did some studying, and I would go to a circuit of local home games, and I started playing quite a bit. Then I slowly transitioned to playing at casinos here in L.A.

Q: Are home games legal?
A: A lot of things about poker are best left to the legal experts. It’s a bit of a grey area.

Q: What’s the difference between pro and semi-pro?
A: Poker players span a continuum of recreational players, who are clearly just doing it for fun, and elite professionals, who make millions a year. In between are semi-pros.

It’s not like you get officially promoted or demoted. I always considered myself a serious recreational player until last year. It was the second year in a row I made more from poker than my day job, and I started thinking of myself as semi-pro. However, I am a notorious stickler, so that is probably an excessively high bar.

Also, this year I am down several thousand dollars because of COVID and am playing nothing but cheapo online games, and if I end up in the red, technically anyone who doesn’t play poker at all has made more money at poker than I have.

Q: What’s your biggest win and biggest loss?
A: Well, every time you don’t come in first, it’s a loss, so it’s hard to categorize.

But last year I got second at the World Series of Poker Ladies’ Event. 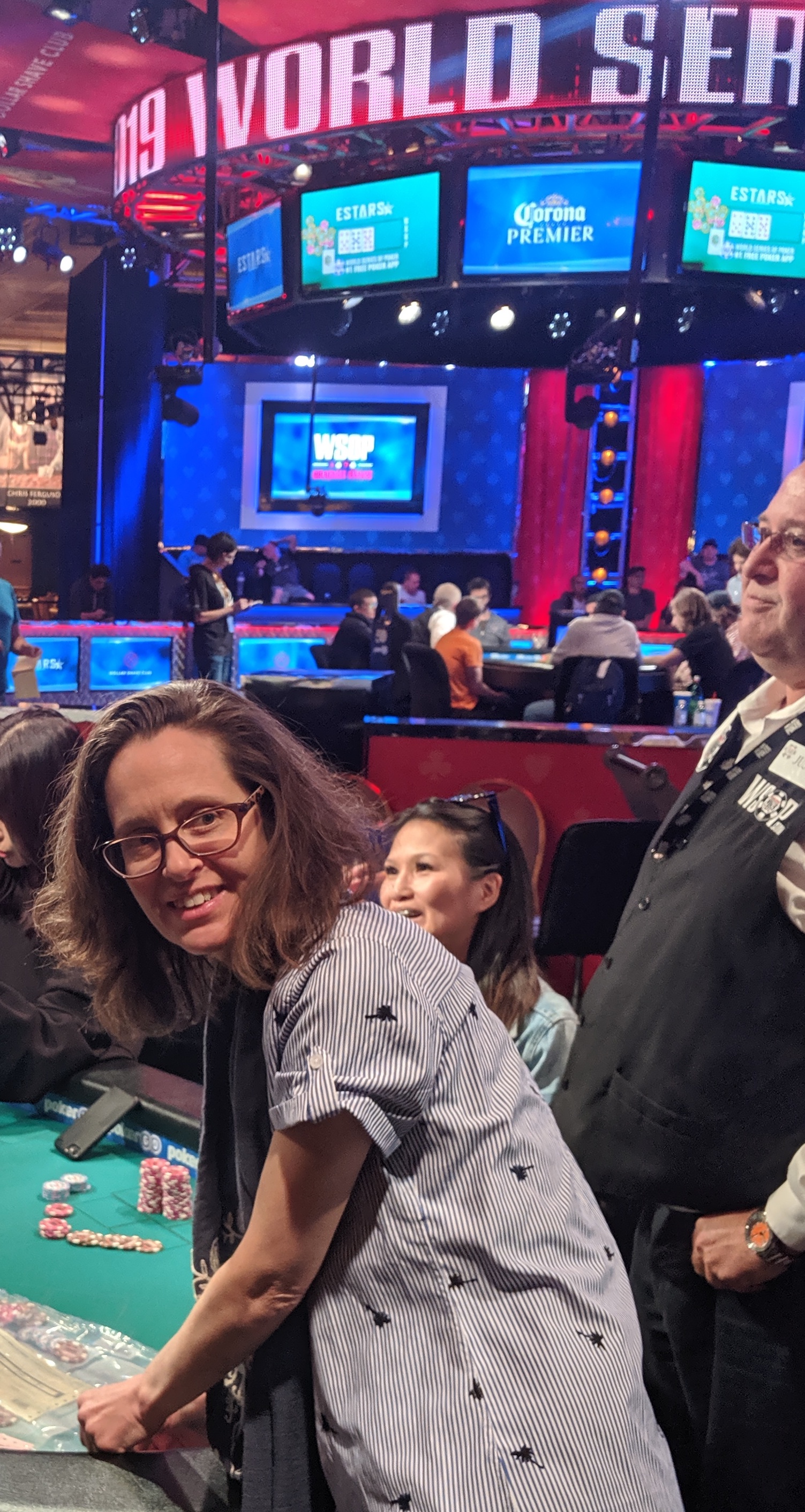 Q: Amazing. What was it like?
A: It’s really stressful. The final table was on CBS All-Access. You’re thinking, “This is a chance for me to make a lot of money. But I could also do something really stupid and walk home with $15,000 instead of $150,000. And everyone’s going to see me do it!”

And people are commentating on you while you’re going through it.

Q: Can you hear them?
A: No, BUT I KNOW IT’S HAPPENING! It’s hard not to hear it in your head, like, “I’m not sure why she’s opening this hand…”

I’m used to my shame being my own personal shame.

I told myself, “It doesn’t matter, no one’s watching this,” but for months afterward people would come out of the woodwork to tell me they watched the game.

It felt very surreal. I was thrilled, but it’s also hard not to feel disappointed. For World Series of Poker events, that was likely to be the only final table I ever make.

And you want the win — you want the bracelet. For the rest of my career, people would say “She’s a bracelet winner. There’s bracelet-winner Nancy Matson.”

Q: Do you remember how you lost?
A: No, I really don’t. Anyone who plays serious poker kind of laughs at how it’s presented in a movie. There’s never really the same level of drama.

Q: Do you have nerves of steel?
A: I would say I’m a lot less bothered by things than a lot of people are.

Q: Can you make a living doing this?
A: That’s where people go wrong. I’m not going to say it can’t be done, but even the really good players will have incredibly brutal downswings.

Some people have some ability at poker, but you really have to have the personality for it. You do nothing but lose. Lose lose lose all the time. It’s just not for everyone.

Q: Do you have any “tells”?
A: I hope not, I don’t know. I think if you play for a while you tend to work them out of your game.

Physical tells are really overstated and not really that much of a part of poker. Like, “Oh, you’re pulling at your earlobe?” That doesn’t really happen.

There was an era where people were obsessively trying not to give out tells. Everyone wore sunglasses and maybe a scarf to cover their neck so you couldn’t see the little vein throb. I’m not saying nobody does it, but it’s much less common now.

Q: What do you like most about it?
A: You get a chance to outwit people. It’s a weird chance to be really aggressive in a situation that’s completely socially acceptable.

For me it’s like a puzzle. Like, “Wait a second I know what you have!” When I figure something out it’s fun.

A lot of people are in it for the rush of trying to win, but for me it’s super-satisfying to learn and see myself improve. If you’re just looking to win, you’ll always be disappointed.

Q: How long do you think you’ll continue playing?
A: Tournament poker is kind of grueling. But I’ll play as long as it’s fun and I can afford it.

Whenever anyone quits poker, I never think, “What a bad decision.” You have to invest a lot of time to get anywhere near decent at it.