Notes from the Infusion Center: An Excerpt from Flowers in the Dark 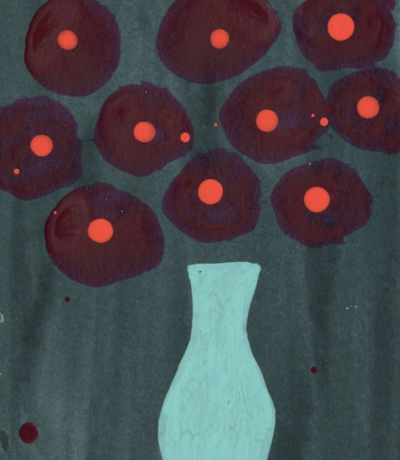 Flowers For Sick People is a multimedia art and health project by McSweeney’s friend and author Tucker Nichols.

Sickness can be a deeply isolating experience for everyone involved. Like many people, Tucker Nichols has lived with illness for years. But there’s something about flowers—even if they are garish or they make you sneeze or they are hardly noticed—that can occasionally poke a hole in the wall of isolation that separates sick people from their loved ones. Sometimes flowers inadvertently express something else altogether, or are completely ignored. Flowers for Sick People is Nichols’ own way of looking at illness while trying to understand how humans struggle to connect in difficult times.

Today we’re excited to share an excerpt from this project. 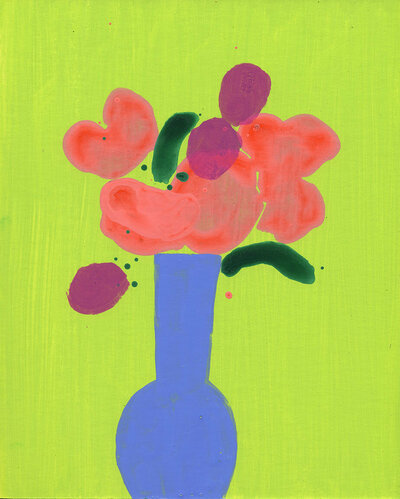 An older couple shuffles into the infusion center. The man is ruddy-cheeked, with a red V-neck sweater and new loafers. He’s holding his wife’s oversized pocketbook. She is nicely dressed, with a colorful scarf tied over her balding head. The nurse is getting her settled into the reclining chair next to mine.

And then, after a pause: “Well what do you want me to do, just sit across from you and watch you get the chemo?” He says the chemo as if it’s a new age treatment her sister insist she try out.

She doesn’t say anything. The nurse is trying to act like she’s not hearing the conversation. I’m looking away with my headphones on but I’m not listening to any music.

The infusion center at UCSF Hospital in San Francisco is made up of a series of sunny rooms along an open hallway where the nurses make phone calls and shuffle folders. Each of the infusion rooms is filled with six reclining chairs and as many freestanding machines that pump medicine from hanging bags into patients’ arms. Until a few years ago, each chair also had its own boxy personal TV on an elbowed arm. The reception was terrible, like the black-and-white TVs you could pay to watch while waiting in a Greyhound bus station in the 1980s.

Occasionally a pair of hospital volunteers comes in and takes food orders from patients for the cafeteria downstairs. Usually it’s an older person and a younger person who don’t know each other. They are always jarringly upbeat. The food is predictably horrible (I will never order the chili again), but having someone bring you a grilled cheese in wax paper while you’re getting a drug infused into your arm is a small miracle.

To keep my Crohn’s disease in remission, I’ve been getting infusions of a drug called Remicade every eight weeks for the past twenty years. When a bag of the medicine is finished, the rate of dripping needs to be adjusted, or air pockets collect in the tube, the pump machine starts beeping. It’s not as shrill as a smoke detector, but designed to annoy until the situation gets attention. Eventually one of the nurses will hear the sound and come press buttons on the pump until it stops. On a busy afternoon, three pumps can be beeping in the same room at once, like a chorus of robotic babies who all need their diapers changed. It can be funny or agonizing, depending on your state of mind. 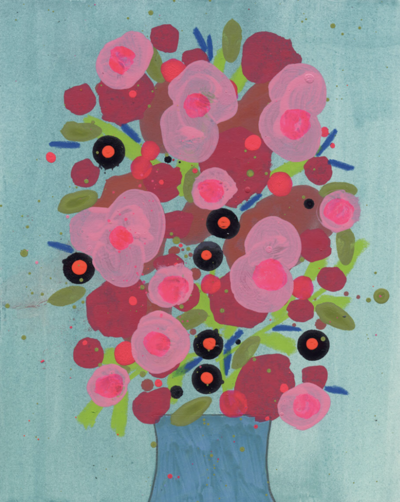 Sometimes I talk to other patients while we are hooked up to our pumps. As on airplanes, I usually wait until near the end of my time there, in case the person is overly eager to talk. But nobody has seemed crazy yet. Our conversations are simple: What are you in for, what’s that like, isn’t this place weird? Like any tribe, there’s immediate shared knowledge among patients here, a sense of family almost, but also solitary and separate. It’s odd to share something so intimate with strangers for a couple hours and then never see them again. The infusion center isn’t church and it’s not a social club, and after all these years, I’ve never made a friend there. But I like getting my medicine with other people. It’s like riding an elevator with a group of strangers, all heading to the same floor.

When I’m finished, I usually walk to a bathhouse down the street in San Francisco’s Japantown. Going from hot tub to sauna to steam room to cold plunge seems to counter whatever effects the drug is having that day. Or maybe it doesn’t do anything. Either way, all that soaking and sweating makes me look forward to infusion days. It’s become an accidental ritual, the second half of getting the medicine. Doctor’s orders.

Evelyn is a nurse I’ve never met before. She looks at me with motherly eyes, and puts her hand on my shoulder as she introduces herself. While she’s preparing to stick the IV needle in my wrist, she tells me how she’s from Ghana, and has a few grown children also practicing medicine in different countries. When I look down, I’m confused to see the IV connected and taped in place. I felt nothing. Some nurses have secret powers.

Walking into the steam room at the Japanese spa after my infusion, the hot mist is so thick I can’t see anyone. As my eyes adjust, I vaguely make out an older man lying on a tile bench by the door. He has a large branch of bay leaves that he’s vigorously brushing against his chest while he takes deep, loud breaths. Like it or not, we are all experiencing the healing power of his aromatherapy. Eventually I can see he’s wearing a wool winter hat but is otherwise naked like the rest of us. I can barely tell how many other people are in here, but I sense an easy tolerance among the group.

Most of the tests are beyond unpleasant. The stuff they make you drink, the machines they put you into, the tubes they stick inside wherever they say they need to go. Like the various drugs they give you, most of them make your symptoms worse. I totally get it—they need the info. But some of these machines are barbaric.

Flora works at the infusion center, and is always there to take my vital signs before I settle in to start my medicine. She’s a die-hard San Francisco Giants fan, adorned with as many team logos and colored pins as she can squeeze onto her scrubs. We catch up on the latest scores or off-season trades, as if chatting over a beer after the game. Her enthusiasm is directed at the baseball team, but it spills off onto the patients, too. Being around people who are excited about anything can make you feel like everything’s going to be okay.

Of all of the desperate people I’ve seen in their chairs getting their medicine, I can’t recall a single person crying. 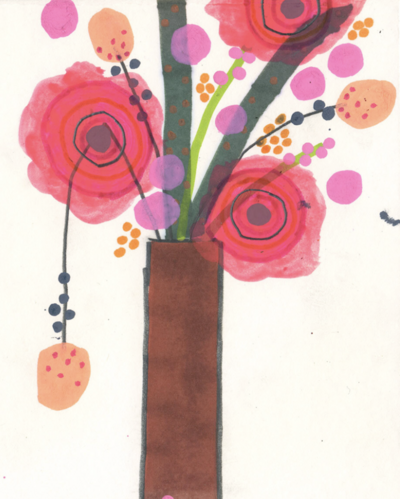 An elderly woman slowly makes her way into the infusion room with her grandson. I think they are Vietnamese. The woman sits down in the recliner across from me, and the nurse asks the young man questions about her symptoms. How is she feeling since her last dose of chemo? How many times a day is she going to the bathroom? How watery is her diarrhea? Her grandson is translating diligently, and I’m feeling the discomfort of everyone in the room. I want the little shower curtain thing to become a soundproof chamber where they can all cry or shout or do whatever the situation calls for. Instead the nurse says, “I’ll be back in a minute,” and stops at the sanitizer dispenser on the way out of the room.

I’m driving over the Golden Gate Bridge one morning on the way to the infusion center for my medicine. It’s a perfect, sunny day and the water is sparkling as a cargo ship heads off to somewhere in Asia. In the air I notice a piece of paper that looks like money. For a moment it lands on my windshield. Other cars are moving fast on all sides, and now we are driving through a cloud of dollar bills, like the aftermath of a surreal pillow fight. I can’t make out the denominations, but I can see it’s real currency. Nobody can stop to gather any of it up on account of our collective speed. Some of the bills get run over, others flutter over the side of the bridge.
This actually happened, but I don’t know what it means.

A woman with curly white hair is cruising down the hallway in an electric wheelchair. She takes a turn and zips toward me as I’m walking to the bathroom with my pump. I can’t tell if she’s a patient or a patient’s mother, but I can see in her eyes that she is feeling the stoke as she speeds by.

Two women come into the infusion center. They are dressed almost identically in stylish gray-on-gray sweatsuits. I can’t tell which one is going to get in the chair. In a way it doesn’t matter because once the patient is all set up, her partner snuggles up next to her and they spend the next two hours together watching a movie on an iPad.

A few months before my father died, I drove with him to the hospital for a chemotherapy treatment. A nurse set him up in a tiny private infusion room. The pump was perpetually in the way, and I couldn’t get the sound on the TV to work. I offered to get him the newspaper or coffee, but he didn’t want anything. So we just sat there. At one point, I went out to talk to the nurses, but there was nothing about his care that needed discussing.

When the infusion was over, we made our way to his car on the roof of the hospital parking lot. It was a bright spring day, and Dad was wearing a red winter jacket he didn’t need. I suddenly noticed his baggy jeans, how his belt was cinched in and buckled into a newly punched hole. He had a light covering of dandruff sprinkled over him and the lenses of his glasses were filthy. I felt my stomach drop. He went to get in the driver’s seat, but I stepped in front of him.

He shuffled around to the passenger side, settled into his seat, and closed the door. I helped buckle the seat belt over his jacket, and we drove home.

Tucker Nichols is an artist based in Northern California. His work has been shown at galleries and museums around the world. His books Crabtree and This Bridge Will Not Be Gray are available in our store.

Get our next six books sent straight to your mailbox for one low price.

Happy Black Friday to consumers everywhere! To celebrate, subscriptions to McSweeney’s Quarterly, Illustoria magazine, and our New Release Subscription are all 25% off through Cyber Monday! Happy purchasing.