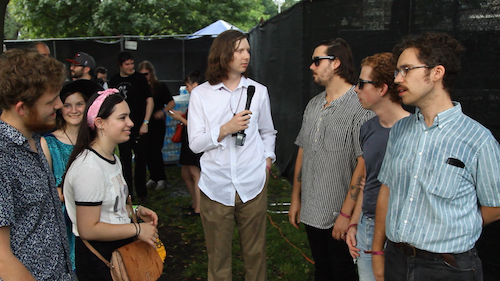 Our crack team of aspiring high school-aged music journalists—for this interview, Elliot Phillips, Aphra Price, and Cristina Cass—met with Parquet Courts on Saturday afternoon, just as the festival was being evacuated for a torrential downpour. These creative writing students channeled their musical knowledge and interviewing skills during the following Q&A with the band.

826 CHICAGO: OK, can you each tell me your name and what you play in the band?

ANDREW SAVAGE: My name is Andrew Savage and I am male soprano.

AUSTIN BROWN: I’m Austin. I’m not in the band anymore. I quit five minutes ago.

826 CHICAGO: So, as you guys are kind of showing us here you have a kind of sardonic sense of humor, what do you think humor plays in your music, what role?

A. SAVAGE: It’s important to be funny.

826 CHICAGO: But, do you guys think there’s anything genuine, what’s kind of the message you think you’re going after wit, you know, your sarcasm and dreary outlook on modern life and such?

A. SAVAGE: For example? A dreary outlook on modern life?

826 CHICAGO: Like in your song “North Dakota.” Like one thing I noticed about that, I kind of got from that song… kind of… mixed messages about how you feel about suburbia, and the duller parts of the country, and out in the rural parts. So I was trying to understand if you have some kind of, you know-

A. SAVAGE: I think that song is kind of a reflection about America but not really the duller parts, I mean, it’s maybe not as exciting as some other places, North Dakota, uh [looks into camera and points], no offense any North Dakotians out there. Its lovely and that’s kind of the point of the song. It’s really, like all things can be beautiful, even the banal and boring things. As far as having a sense of humor, I mean people just relate to that sort of thing you know, you got to be yourself if you’re going to be a writer. If you’re going to be a journalist writer, or if you’re going to write music, you need to be genuine and be yourself to make a connection with anybody, whether it’s your readership or listenership.

826 CHICAGO: He mentioned the “North Dakota” song, was that inspired by a trip there or something?

A. SAVAGE: Yeah, I was inspired by one time me and Austin were on tour with another band and we drove from Fargo, North Dakota to Seattle and it took three days. It was wonderful.

826 CHICAGO: OK, a lot of people kind of say your sound, it takes a lot of influence from Pavement. Now I’ve never personally felt that way but I wanted to know how you guys feel about that comparison? And what do you guys think your sound is more informed by or influenced by them?

A. SAVAGE: Yeah, they’re a good band, they’re legends, but we do our own thing.

M. SAVAGE: We just want to be Parquet Courts, so getting compared to other bands like Pavement, while you can take it as a compliment it gets old after a while.

YEATON: What was the question, what did you ask? Pavement? Ah yeah, they’re great. We’re always at the same spot as them in the store.

826 CHICAGO: Who would you say some of your influences are?

A. SAVAGE: Proto-martyr, right over there.

YEATON: Uh, and you know Guns N’ Roses comes immediately to mind, so it has to be true.

826 CHICAGO: OK, if you could work with any artist, living or dead, who would it be?

YEATON: One of those elephants that paints with their trunk. Any of them. All of the living ones, as many as you could get over here right now. Yeah, yeah, those guys. They’re great. The male ones and the female ones. I love what they do.

826 CHICAGO: Andrew, I heard you were having a visual art exhibit out now, can you tell us a bit about that?

A. SAVAGE: Yeah, it’s a show in Brooklyn its called, Color Studies. It’s all prints. It’s similar to show I’ll have in Germany in September. I’m not really a printmaker but it was a print shop that is also a gallery that offered the show to me, so it was a cool new experience. New colors, colors that I never use, lots of pinks, purples, teals, stuff like that.

826 CHICAGO: Do you guys feel you’re going to take your band in a new direction anytime soon, or what are you changing about your music as you’re working in the studio?

A. SAVAGE: Parquet Courts is constantly going in a new direction, I think. Always.

BROWN: I’d like to go in a very dry direction maybe, with a roof somewhere.

826 CHICAGO: OK, thank you guys so much for coming and having this interview with us.