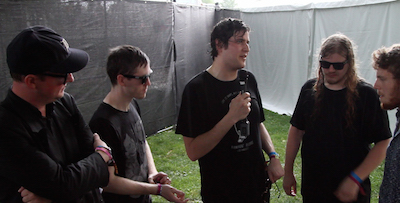 Our crack team of aspiring high school-aged music journalists — for this interview, Avery Panganiban, Ryan Wangman, Makele Clemmons, and Imaan Yousuf — met with Protomartyr on Saturday afternoon, just as the festival was being evacuated for a torrential downpour. These creative writing students channeled their musical knowledge and interviewing skills during the following Q&A with the band, talking tie-dye, pep, and accidentally wearing all black on a summer day.

826 CHICAGO: To start off, can you each tell us what;s your name and what you play in the band?

826 CHICAGO: So, um, what’s the story behind your name, Protomartyr?

J. CASEY: I saw it in a book once and I thought that sounded really cool. So I thought if I ever had a band it would be one of the names I would use.

826 CHICAGO: Does it mean anything?

J. CASEY: It’s whoever’s the first person to die for a cause. Whether it’s religion or politics or something, they call them a “protomartyr.”

826 CHICAGO: So you guys are from Detroit, so I wanted to ask how the influences of the big Detroit bands from the 60s and 70s, like the Stooges, and the MC5, and the White Stripes… kind of… if they’ve affected your music at all?

G. AHEE: I would say the Stooges for sure, especially like Iggy Pop when he started making solo records. He made a few phenomenal records. That’s definitely a big influence. Not so much, some of the more garage-y stuff. Maybe, at least not directly in sound, but maybe the spirit of it might’ve influenced us.

826 CHICAGO: Yeah, there’s kind of a biting aspect to your music that’s kind of there too. And also, a lot of people compare your work to the British post-punk artists, you know. Kind of Joy Division, such and such. Can I ask you guys how you feel about those comparisons?

826 CHICAGO: So what genre would you place yourself in?

826 CHICAGO: So is there a reason behind you all wearing black onstage, even though it’s very hot outside?

J. CASEY: Well, we heard if you sweat, if you’re wearing a white shirt or gray it comes through. If you wear black you can’t see.

A. LEONARD: I don’t think we’ve ever all worn black before today.

J. CASEY: Yea, it’s weird. But I think we all knew that we were going to sweat a lot, so we don’t usually all dress in black but — we’re a dark band!

826 CHICAGO: You sure you guys don’t want to take your music in a peppier direction? You think that might earn you a couple more points on Pitchfork?

G. AHEE: That’s what it’s all about, getting more points on Pitchfork, it’s why we do this.

A. LEONARD: Yeah, next time we’ll be in tie-dye and like, headbands, and be like, really peppy.

826 CHICAGO: Yeah, how do you feel, like in that vein, how do you feel your music clashes with, like, these summer festivals where a lot of the music is very pop-y and fun and you guys are very, you know, angry.

J. CASEY: Well, I’m not angry, but, uh, it’s funny. You know like, I feel kind of bad for people when we’re bumming them out sometimes. But, I think some of it’s nice, right?

A. LEONARD: Yeah I mean it’s not all angry, I think it’s nice.

G. AHEE: Yeah, uh, maybe we’re just so angry we can’t see how angry it is.

826 CHICAGO: So Joe, why the suit? And do you wear that all the time for your shows?

J. CASEY: Uh, I used to, I wasn’t going to wear it today but then it seemed not as hot as I thought it was. I don’t know why I wear it. Because it’s got pockets, I like putting my hands in my pockets.

826 CHICAGO: So how do you feel about the crowd and Pitchfork compared to other venues you’ve played at?

A. LEONARD: I think it’s been good, everyone’s been liking—

J. CASEY: It was nice to look out and see smiling faces, always good.

S. DAVIDSON: I love the crowd.

826 CHICAGO: What are your favorite kind of venues to play at?

J. CASEY: Well, we used to like playing small places because then they’d get packed up. Um, we used to play at a place in Detroit, but then it got too crowded, so that’s kind of sad. So we like bigger places. Not like, when it’s so big it’s a little overwhelming.

G. AHEE: I’m excited to play Schubas tonight, that’s where we’re playing the after-show. I’ve never played there, hear it’s great. Uh, we tend to like club shows. Mid-level club shows where people don’t… I tend to get claustrophobic, so when there’s a lot of people around I get uncomfortable, so if there’s a little bit of space.

826 CHICAGO: Are you guys planning on taking your sound in any new direction anytime soon? Or are you sticking with… kind of… what exactly is going on with Protomartyr in that regard?

G. AHEE: I don’t know if we consciously try to, like I think we’re doing… our next record that is going to come out is going to do a lot of new stuff. Because our first and second records are pretty different, the new one is going to, we like to try new things and be a little bit uncomfortable sometimes. Because otherwise it gets boring, so I think we’ll continue to add in different things to the sound, or maybe just change it up completely.

826 CHICAGO: OK, this is Elliott signing off — any last comments about the festival?