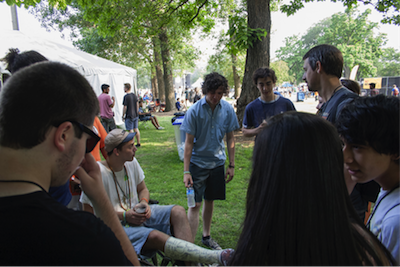 Our crack team of aspiring high school-aged music journalists—for this interview, that included Adam Ciurus, Mileena Rosa, Michel Quiles, Jacob Kayser, Katie Treskow and Amelia Curry—met with Twin Peaks on Sunday afternoon. These creative writing students channeled their musical knowledge and interviewing skills during the following on-the-spot Q&A with the band, discussing how guitarist/frontman Cadien broke his leg (he performed Saturday in a wheelchair), discovering the famous TV after they chose their name, and the best time for rock ‘n’ roll.

CADIEN LAKE JAMES: We were on tour with the Orwells in March, a band from Chicago, and I was really juiced up and acting a fool and at some point, I picked up the lead singer Mario and just collapsed under his weight and fractured it and didn’t get surgery like I should have because we were on tour.

826 CHICAGO: What are your favorite places to hang out in the city?

CLAY FRANKEL: I love taking the train in general, it’s one of my favorite places to be.

CONNOR BRODNER: Lakeview, the north side of Rogers Park, Ravenswood

826 CHICAGO: Are there any artists from Chicago who influence your sound?

826 CHICAGO:Do you have any advice for future musicians?

CADIEN LAKE JAMES: Don’t get anyone pregnant, try not to break your leg but when you do, go to the hospital.

826 CHICAGO: How’d you come up with the name Twin Peaks?

CADIEN LAKE JAMES: We were in-between names and my brother was watching the show. We knew nothing about the show but I thought it was a cool name.

826 CHICAGO: You guys big fans of the show now?

CADIEN LAKE JAMES:I think it’s a genius show. I’m excited for the Blu-ray to come out. It’s got deleted scenes. It’s called “The Entire Mystery”; it’s supposed to connect the movie to the show and if you’re a fan of the show, you’re probably as excited as I am because that’s pretty juicy.

826 CHICAGO: Where did you play your first gig?

JACK DOLAN: First gig was a battle of the bands at an open mic in like 6th grade. We played together in middle school. We’re fortunate to come from a school that encouraged art and gave us a lot of opportunities to do that.

826 CHICAGO: When do you think the best time for rock n roll was?

CADIEN LAKE JAMES: Every day is the better than the last one cuz you have all the stuff from before and whatever from If I coulda seen some shows from like early CBGB’s that would be awesome.

826 CHICAGO: Do you guys have any embarrassing facts about each other?

CADIEN LAKE JAMES: I snore all the time; it’s how I sing at night. Actually, an interesting fact is you don’t dream if you’re snoring.

826 CHICAGO: If you could pick one superpower, which would it be?

JACK DOLAN: The power to control time. Tight now I could pause time and take all your money.

JACK DOLAN: Well, maybe I’d pause time and put a bunch of money in all your pockets.

CLAY FRANKEL: I’d pick invisibility, that’d be cool. I’d be sneakin’ in and out of all sorts of places.

CADIEN LAKE JAMES: I’d have to go with the Flash, super speed. I could run from my house to your house in like 10 seconds. That would be awesome. I don’t know, I’d take any superpower. Really, you can’t be picky. If I had a superpower I’d be killin’ it.

826 CHICAGO: You either switch genders each time you sneeze or you can’t tell the difference between a baby and a muffin: Which would you pick?

CLAY FRANKEL: Probably the muffin thing. It would be much too confusing and uncontrollable to change genders all the time. My perspective would probably get messed up and I would be a confused person.

CADIEN LAKE JAMES: I would do the sneeze thing, because I think I always sneeze twice, so I’d be a chick for like 30 seconds and one guy would see it and be like “Whoa!”

CONNOR BRODNER: What if you just carried around some pepper?