This is the second in an ongoing series of essays we’re running alongside the release of the fifth season of the Organist, the arts-and-culture podcast we produce with KCRW. This piece, which features text by Bianca Giaever and photos by Jonno Rattman coincides with our latest episode, Two Years With Franz. 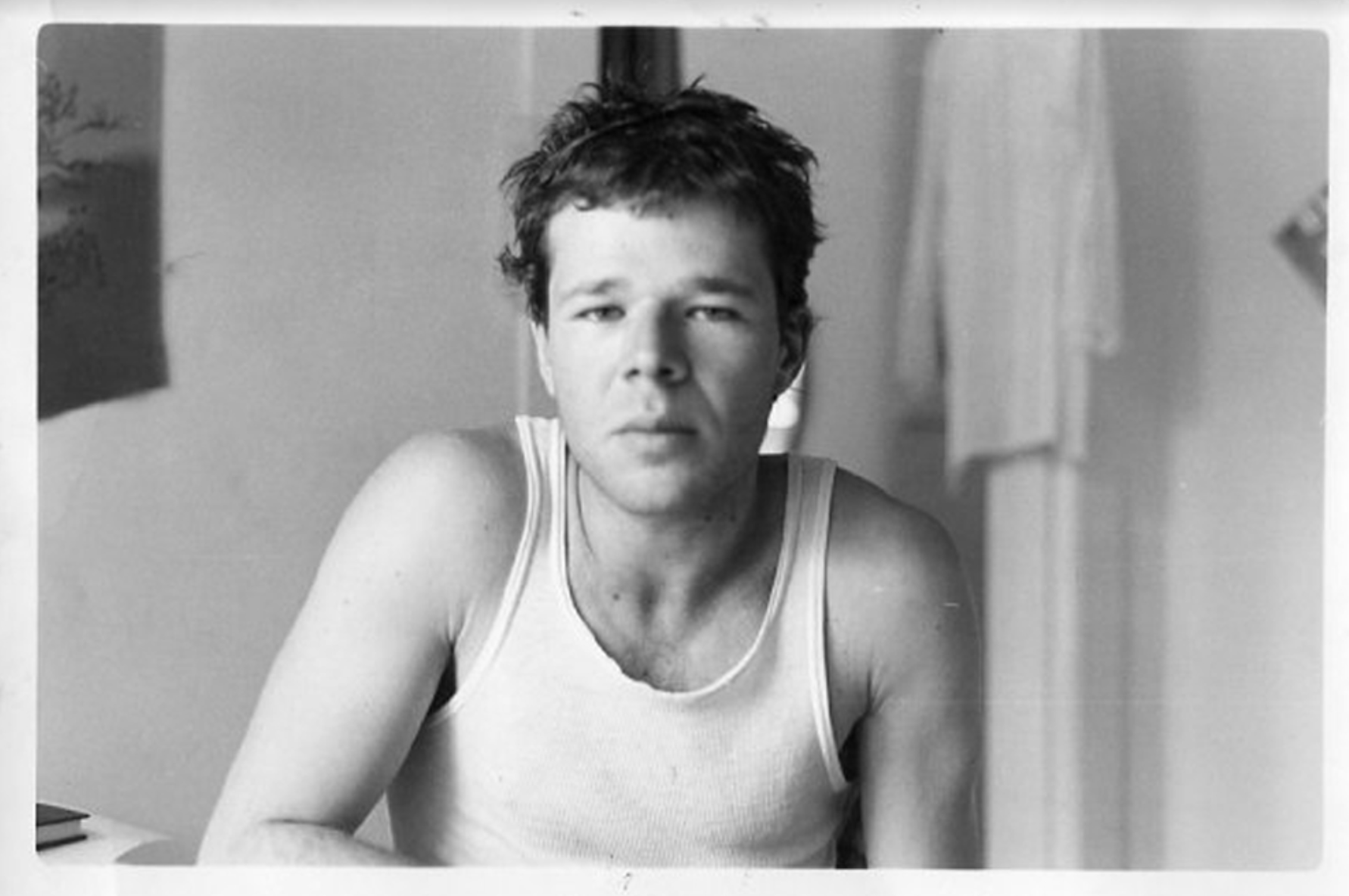 This is Franz Wright, twenty-five years before he would win the Pulitzer Prize in poetry. He was known in the poetry world as a genius and a lunatic. He was plagued by mental illness and addiction. He attempted suicide many times. All of his attempts failed. 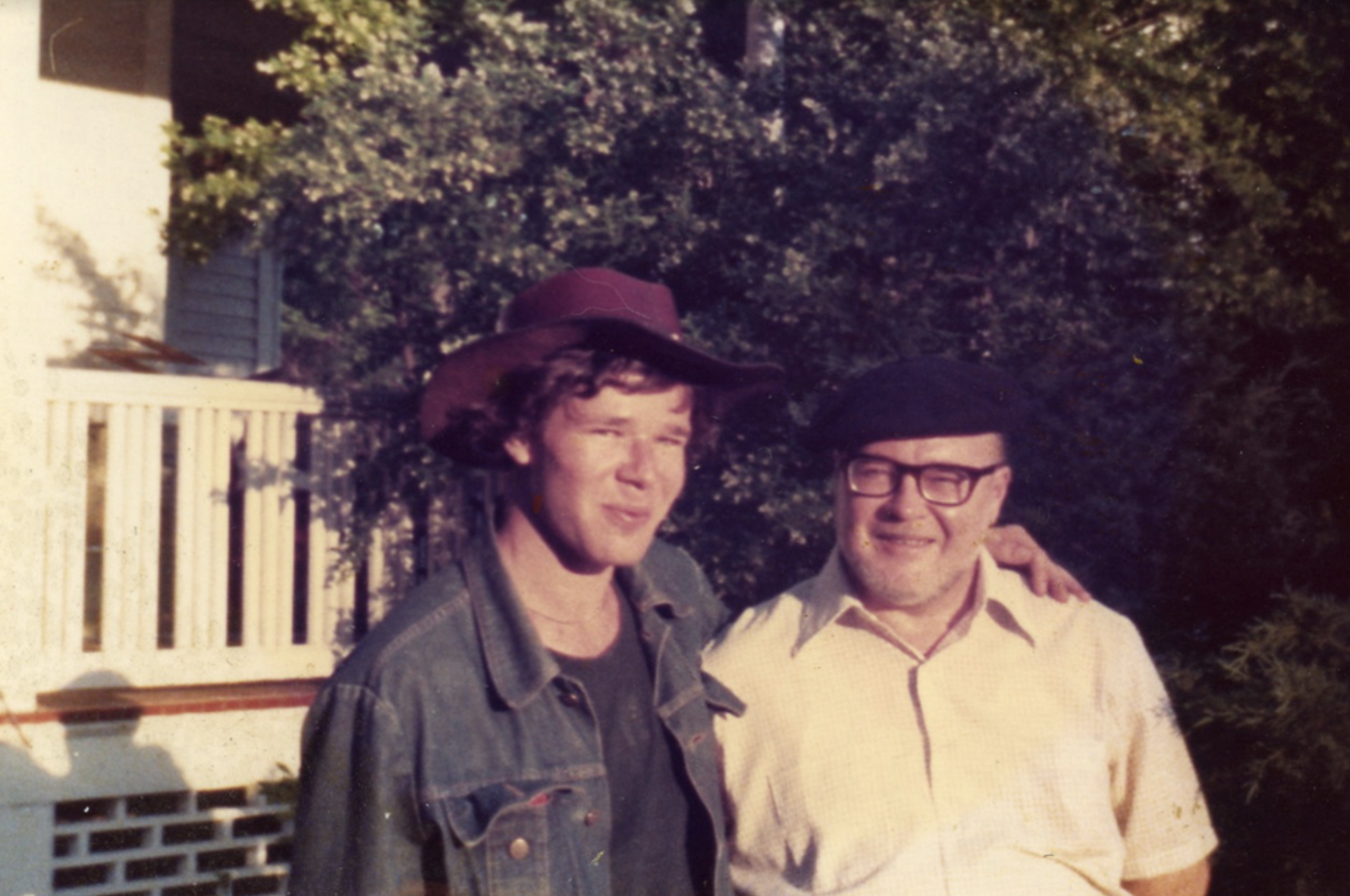 Here he is with his father, James Wright, who won the Pulitzer Prize in poetry in 1972. They are the only parent-child duo to both win a Pulitzer. 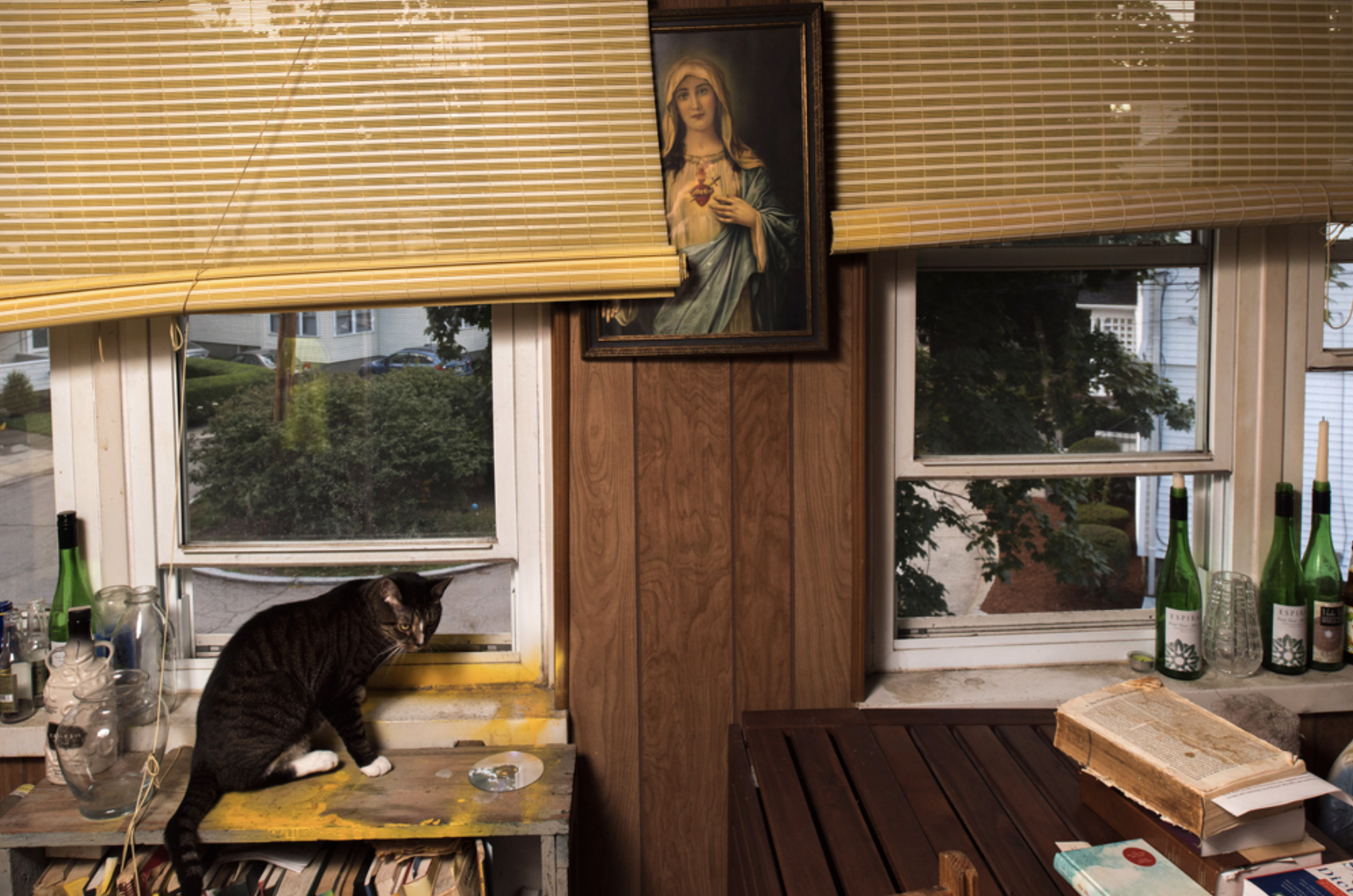 Franz died in 2015. A year later, a friend suggested I visit his apartment. I had never heard of Franz Wright, but I went to his home in Waltham, Massachusetts to see if it was worth documenting. 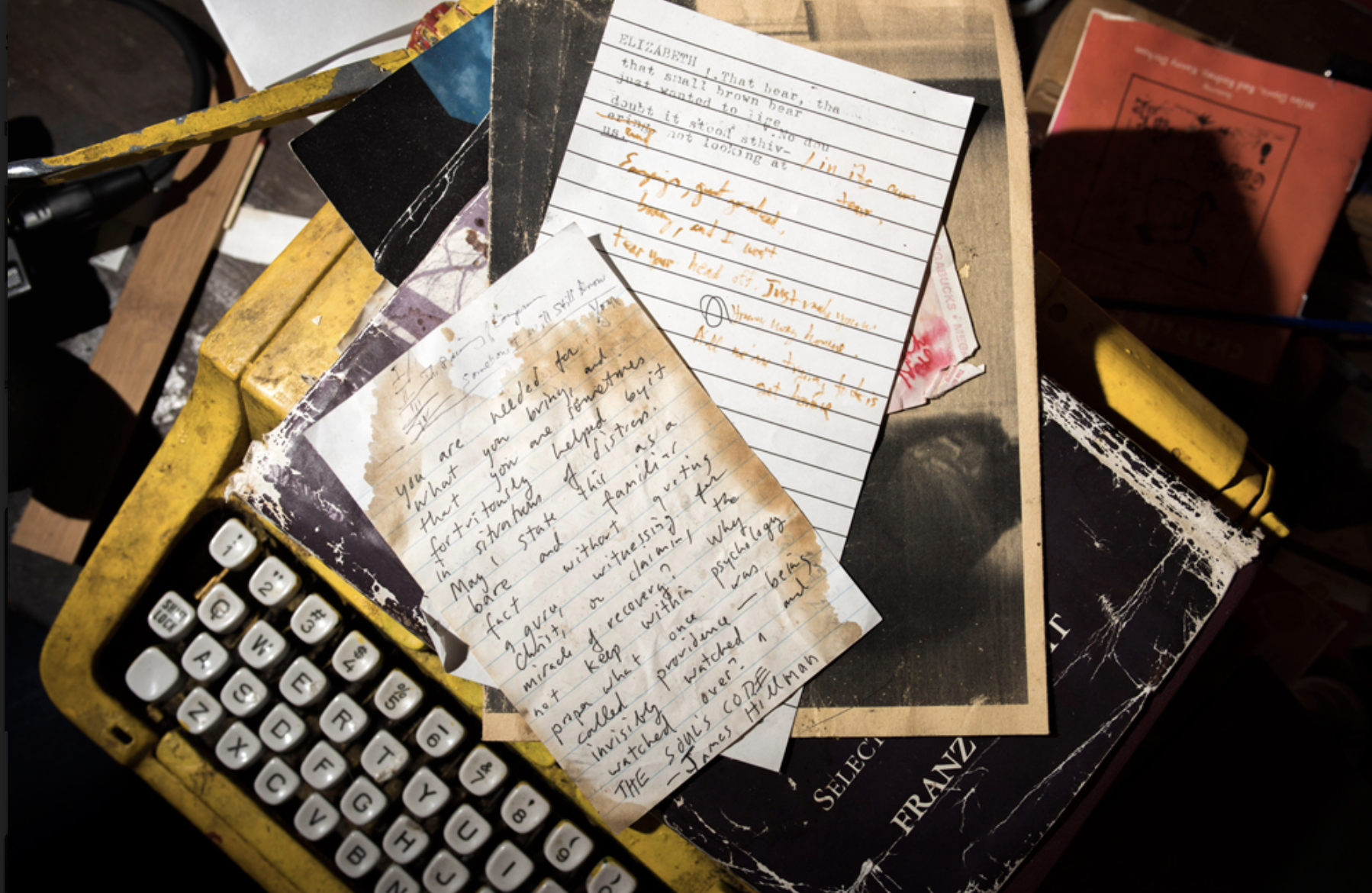 I was amazed by what I saw. Writing covered the apartment. Franz wrote poetry directly on the fridge, painted poetry on the walls, and even scribbled on coffee filters. 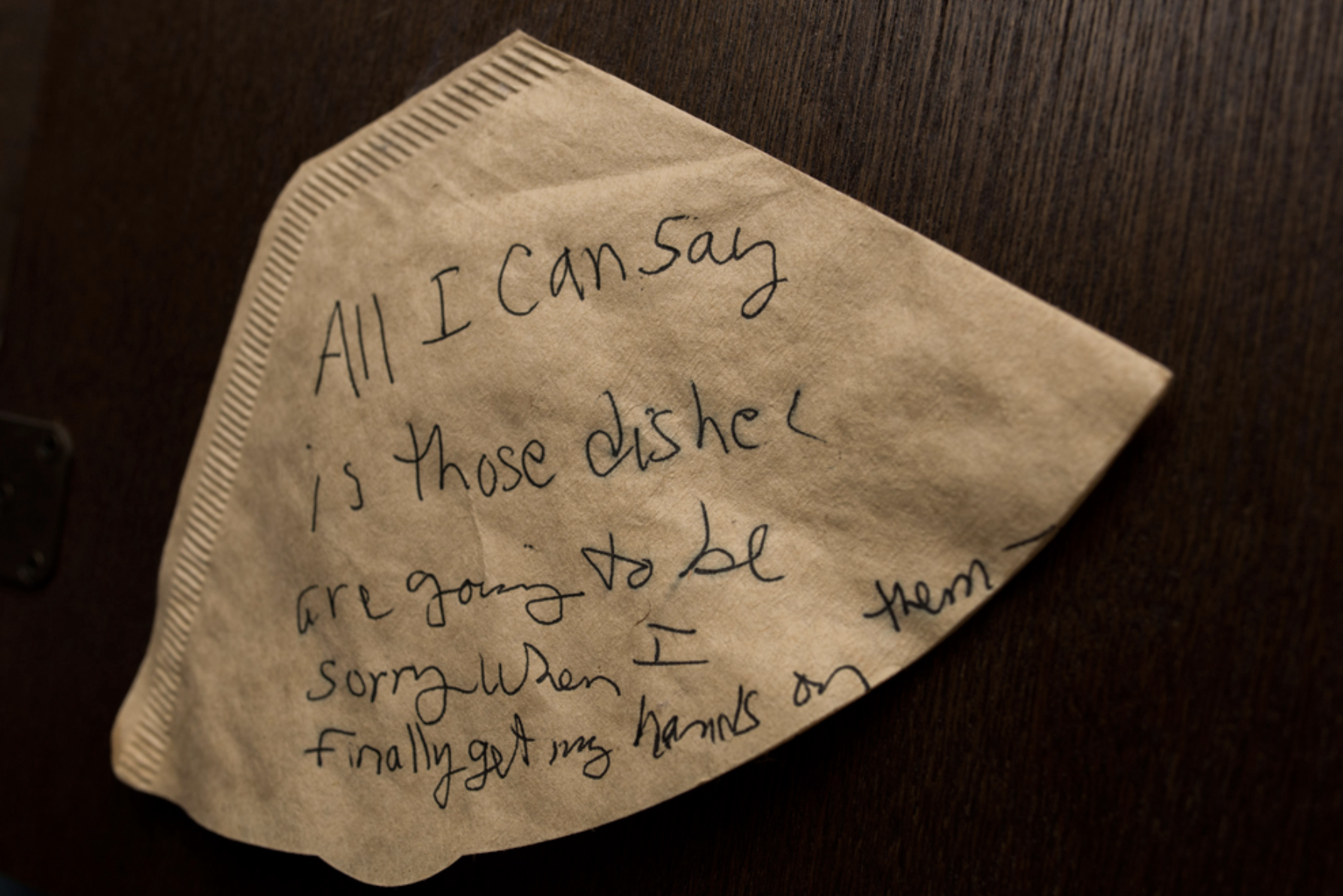 I began interviewing Franz’s wife, Elizabeth Oehlkers Wright. Most people call her Beth. They had left love notes for each other all over the house. I quickly became enthralled with the romance of their love story. Here are notes that I found taped above the toilet, where they were sure to be seen first thing in the morning. 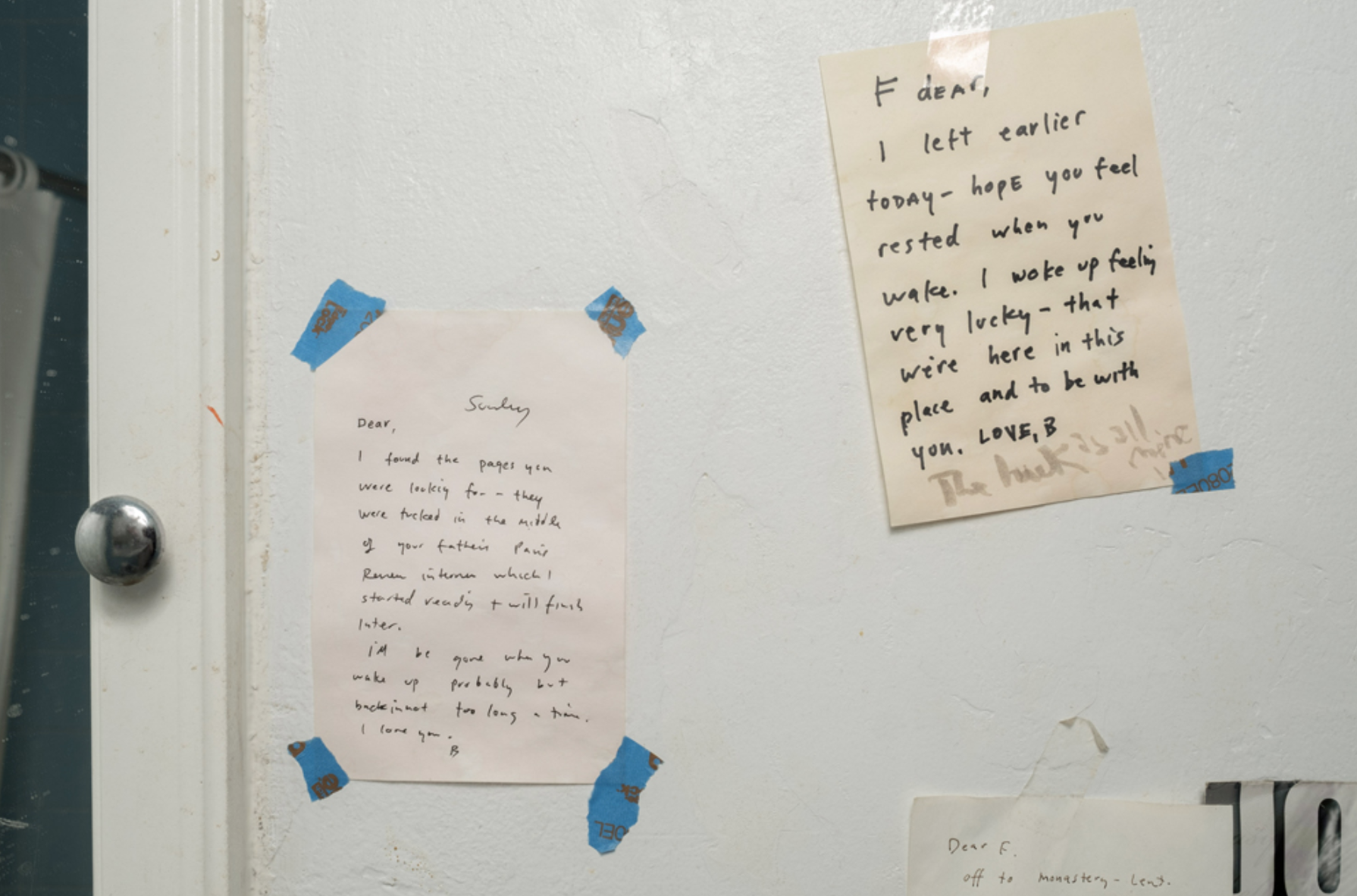 On my second visit, Beth gave me 546 audio tapes that Franz recorded after his terminal cancer diagnosis. Unable to type because of pain in his wrists, Franz used an audio recorder to dictate his poetry, but it picked up much more: Franz talked with his wife, made phone calls, cursed at his cat, and fantasized about the first human to ever speak.

This is a note Franz sent to the poetry editor of the New Yorker at the time, Alice Quinn. This is before she had ever published his work in the magazine. This letter has stayed on her desk for the past twenty-seven years. “I brought this letter home, so it had a sacred quality for me, definitely. I respected him very much,” she told me in an interview. “Franz’s sincerity was profound. And his claim to suffering was very justified.”

Franz’s work ethic was remarkable. He worked up until three days before his death. In the audio tapes, it was not uncommon for him to record eight hours of poetry in one day. He would often fall asleep while writing poetry, pushing his body as far as it could go.

This photo shows him recovering from brain surgery. The moment he woke up he asked for his manuscript, a coffee, a cigarette, and a shot of whiskey. The nurses allowed him the manuscript and the coffee. 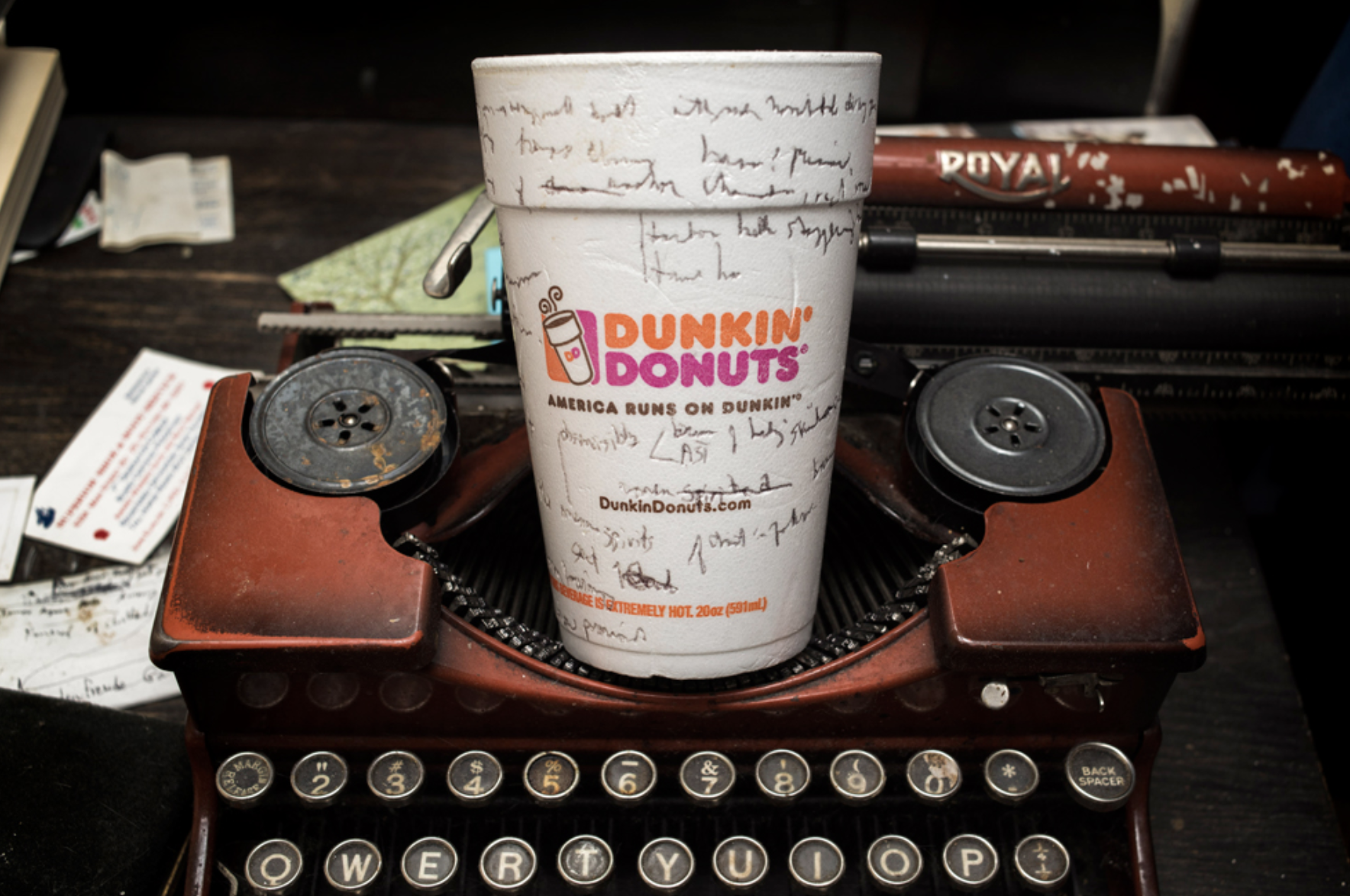 This is the coffee cup where Franz scribbled poetry immediately after his brain surgery. 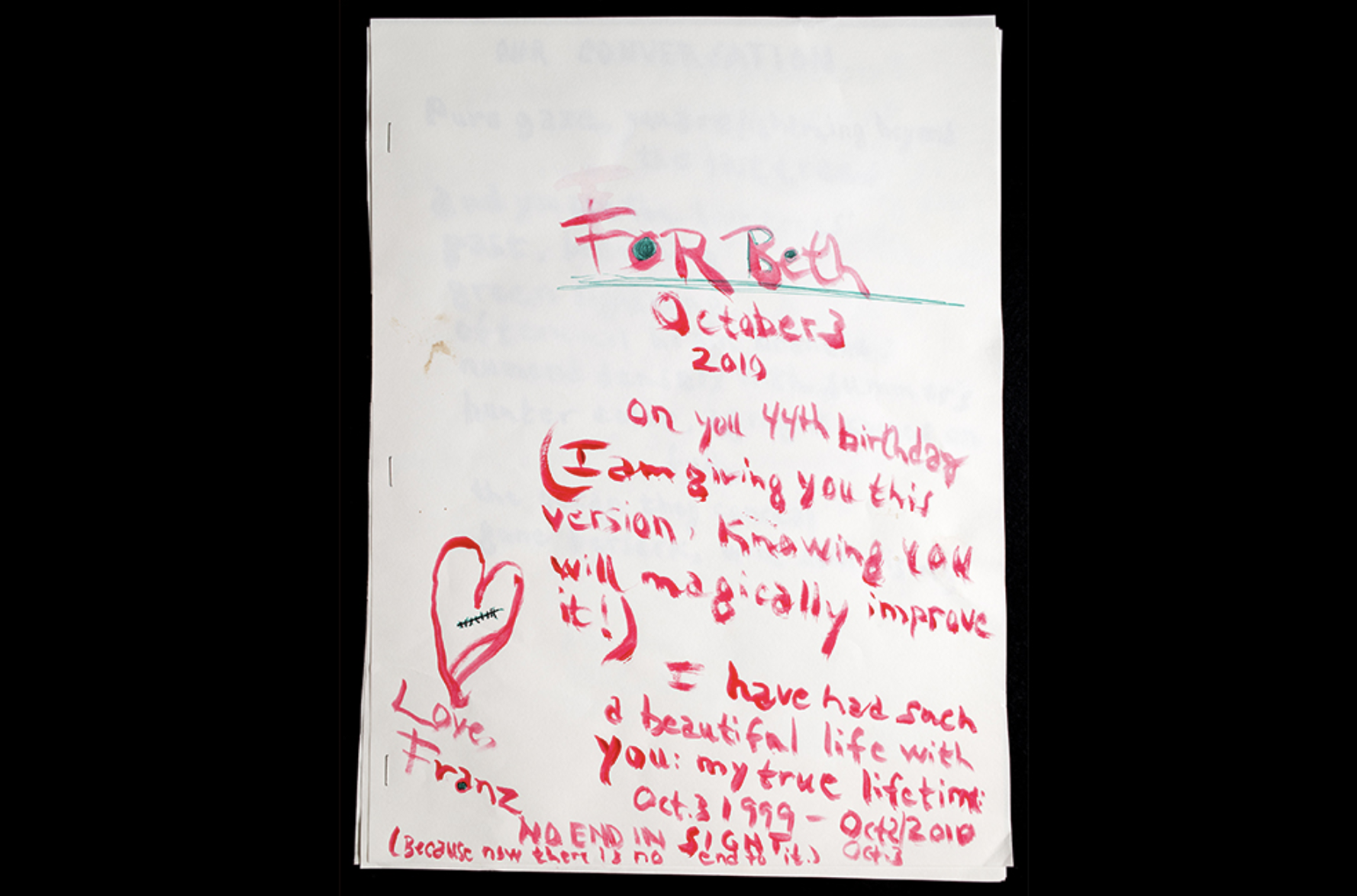 It took me two years to listen to the audio tapes, which is the same amount of time Franz spent recording them. In those years I became close with his wife Elizabeth while she grieved. I read their early emails and love letters. In this letter he writes the dates of their marriage as “my true lifetime.” By the end of the two years it took me to listen to the tapes, Elizabeth had moved out of their apartment in Waltham and into her own tiny house in Maine. 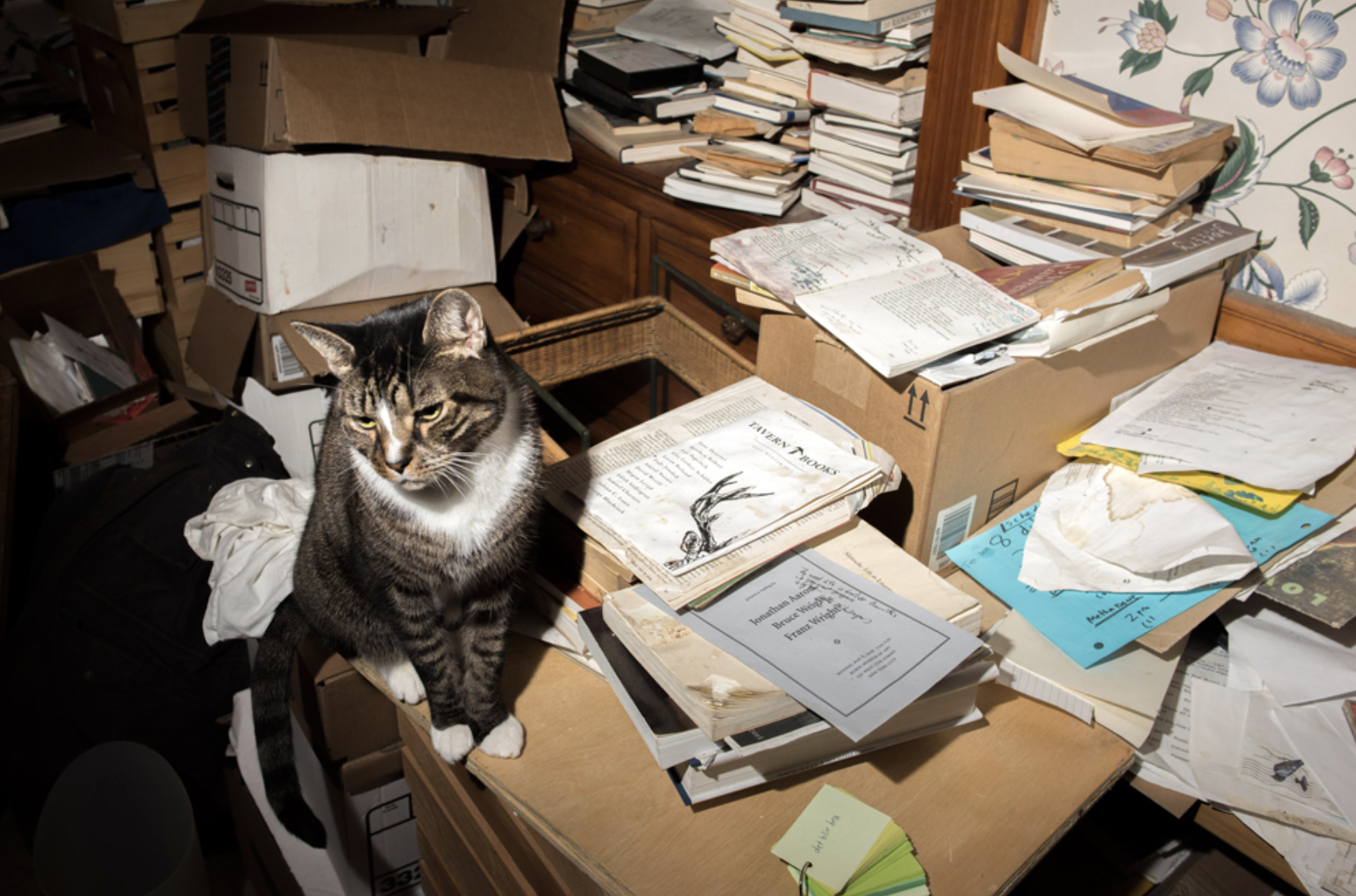 Franz’s cat, Robert, among his papers and books. 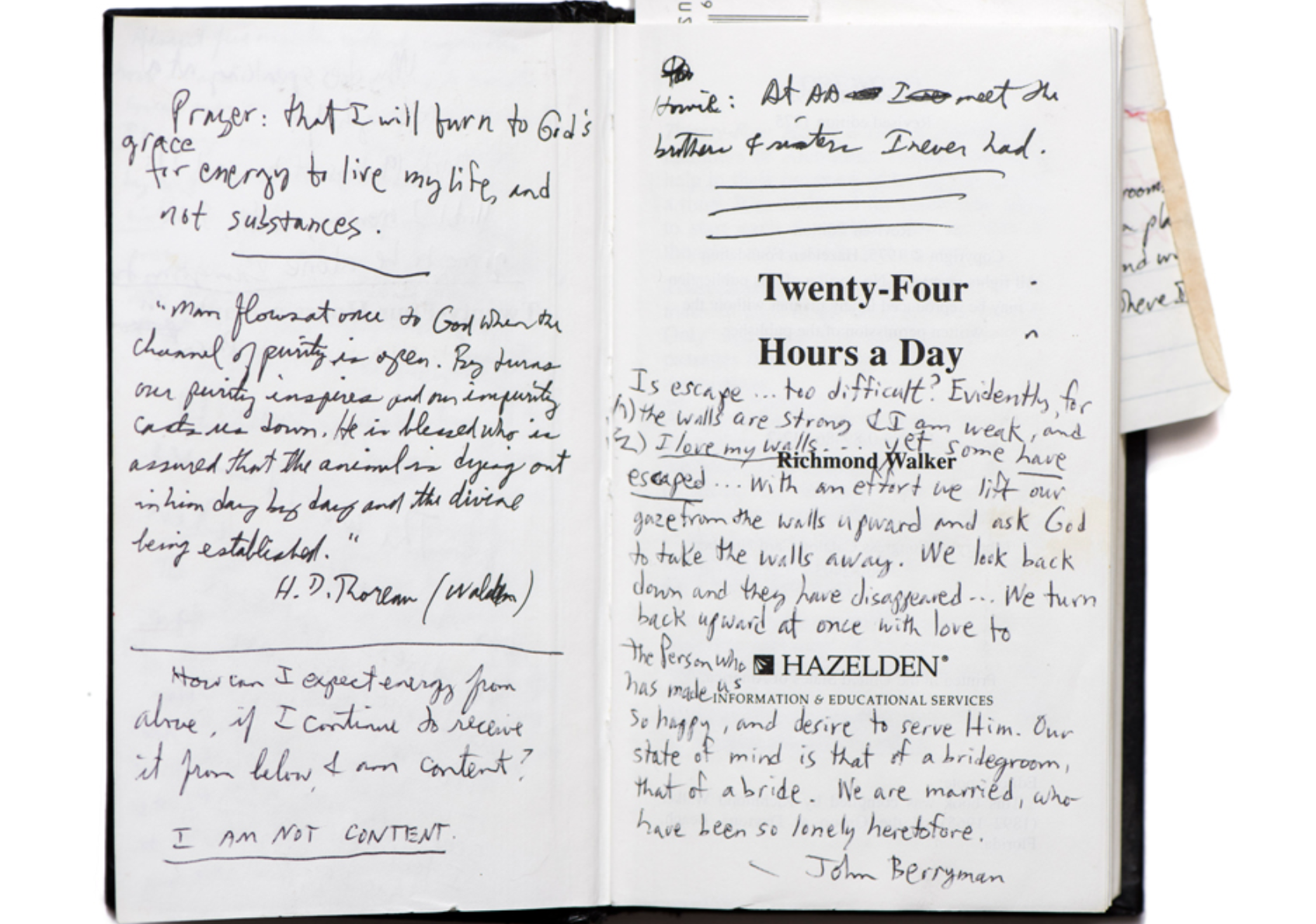 Franz’s Alcoholics Anonymous book, where he wrote during meetings. 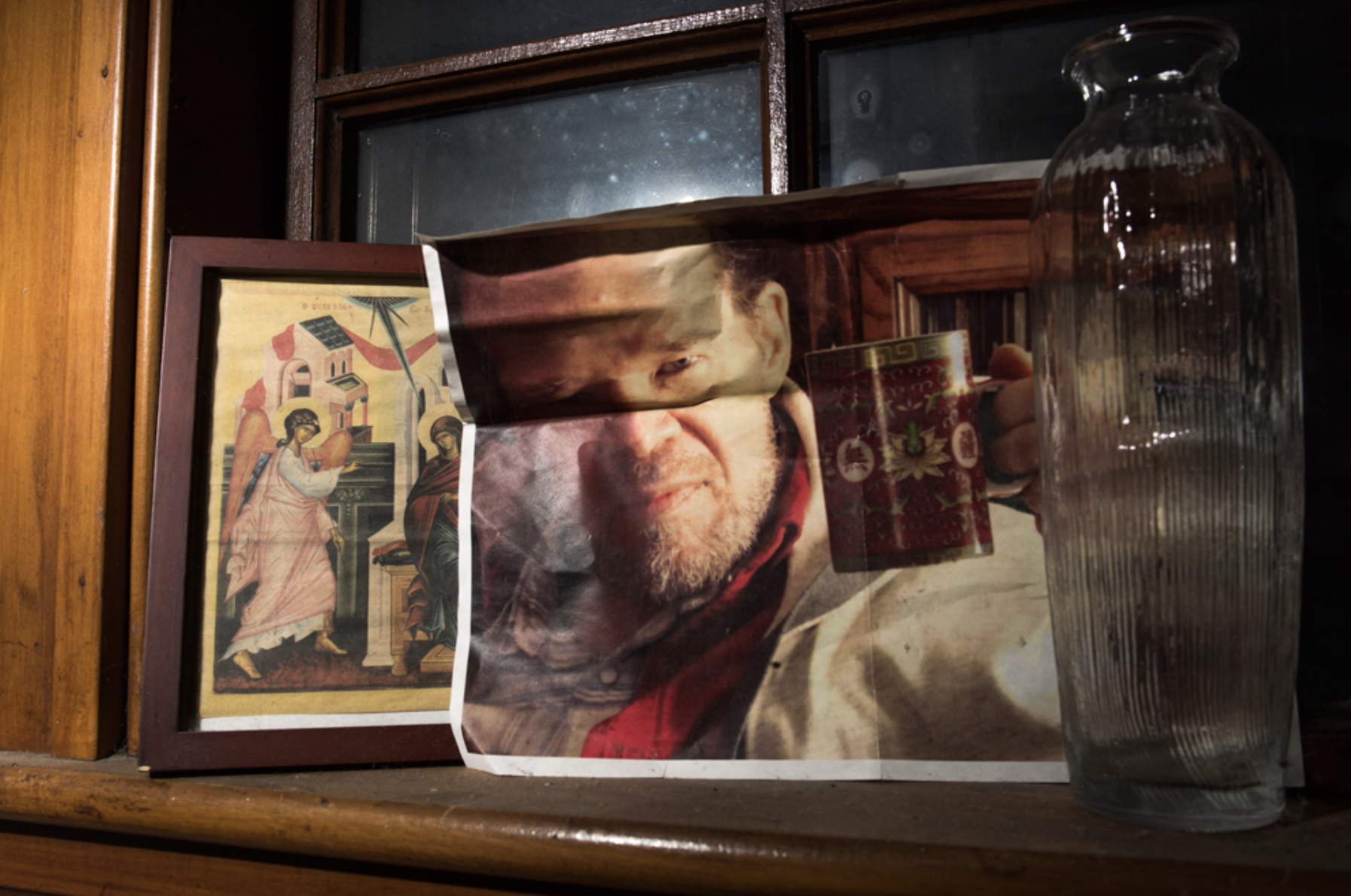 Franz converted to Catholicism later in life. He found solace in the back of Catholic churches, sitting in the pews. He begins his book The Beforelife with a poem called “Empty Cathedral”:

There’s this pew
at the back
that’s been
waiting
for you
all your life, like your death bed. 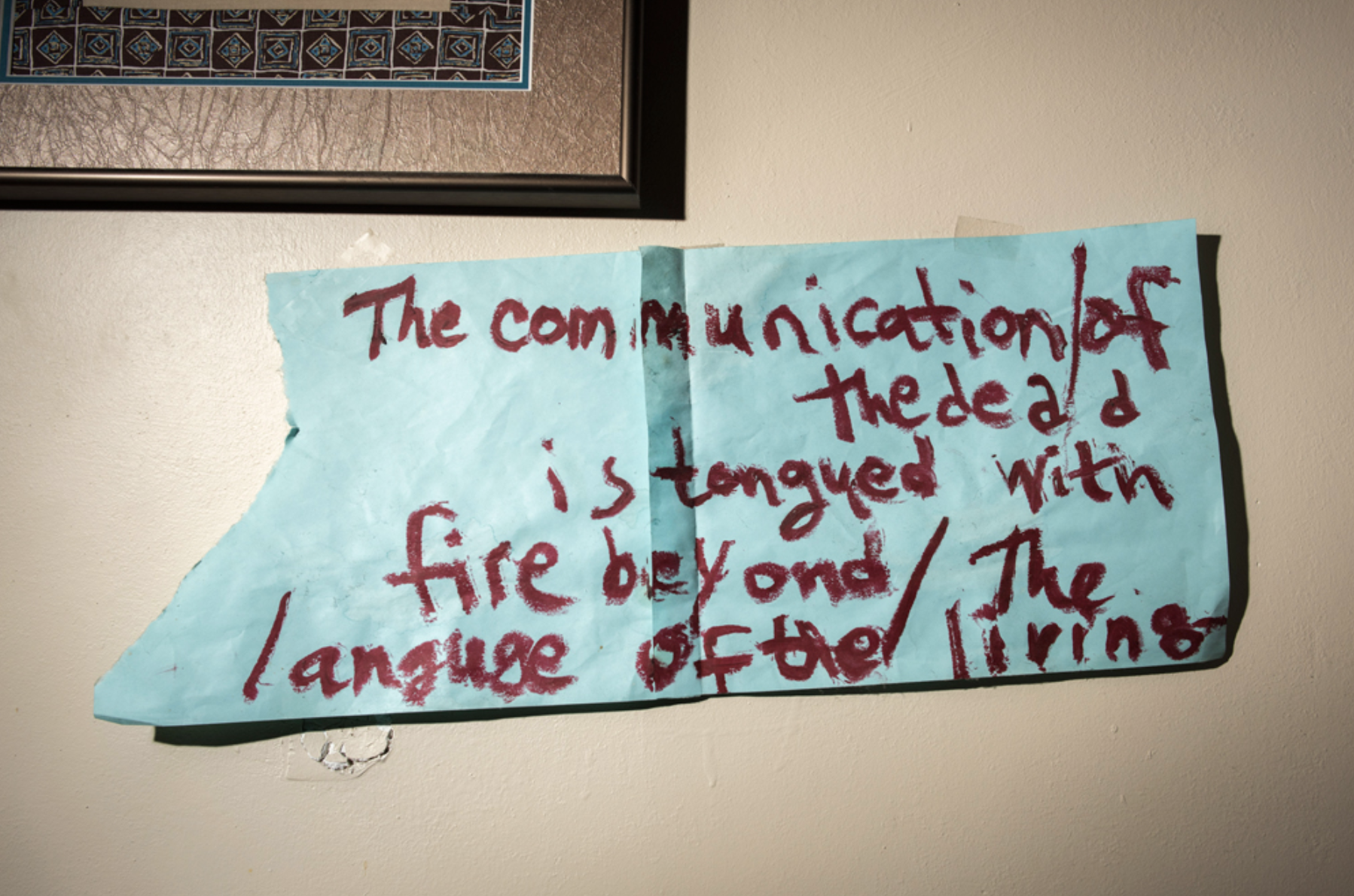 A line from a T.S. Eliot poem that Franz painted. After his death, his wife Elizabeth continued finding notes from him to her. It also took her years to listen to all of the audio tapes he left behind. She is still listening. 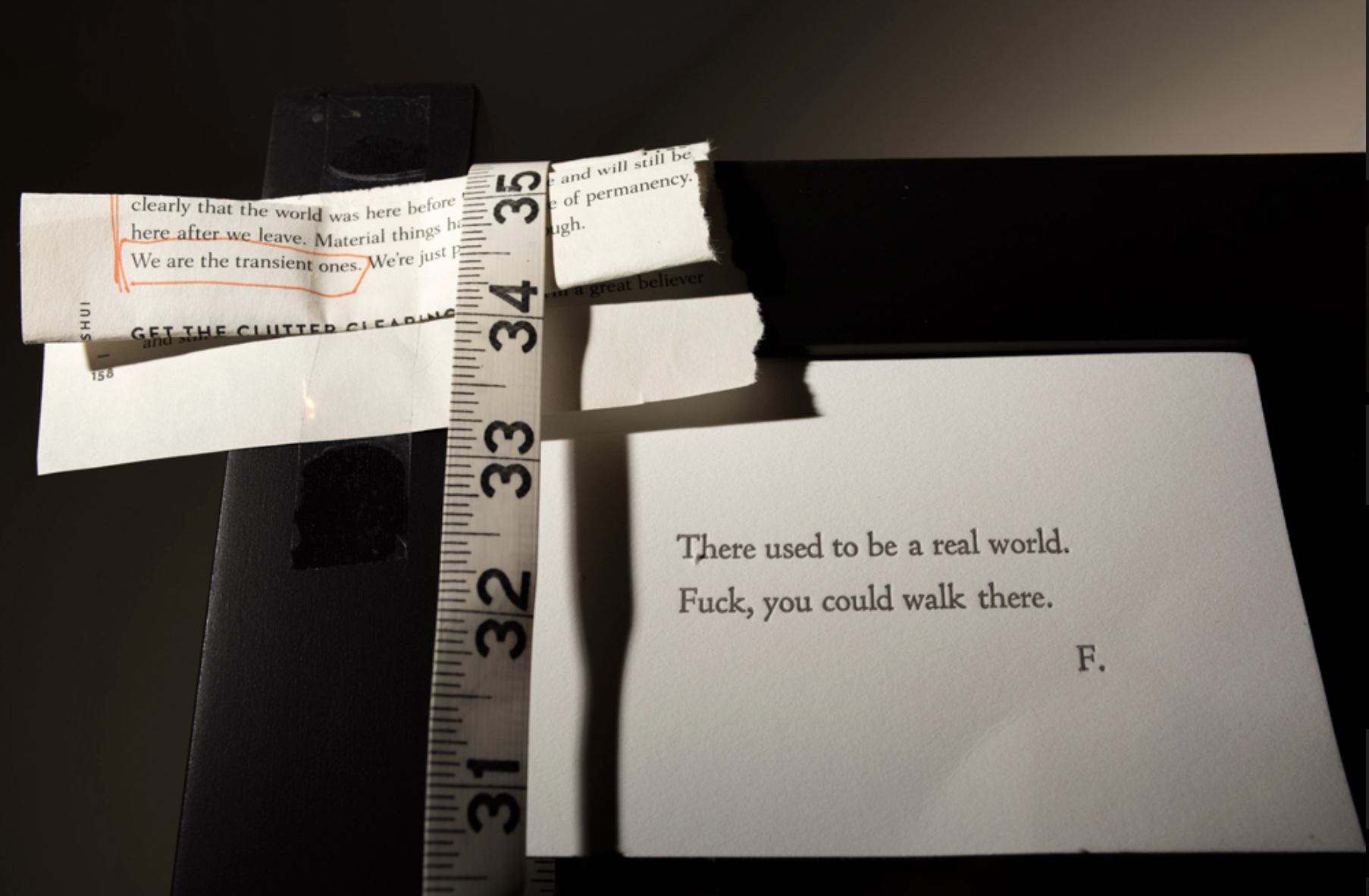 Franz died on May 14, 2015 in Waltham, Massachusetts. That spring was unusually cold in the Boston area, and his home was pummeled by blizzards. A few weeks before he died, he said to his brother: “There used to be a real world. Fuck, you could walk there.”

Listen to the latest episode of the Organist to hear Bianca Giaever’s documentary, “Two Years With Franz,” produced with Jay Allison for the public radio site Transom.org.