Continuing on with convergences from my summer vacation: A few weeks after my visit to ’London’s National Gallery":http://www.mcsweeneys.net/books/everythingthatrises.contest58.html, I was in Milan, Italy, approaching one of my favorite cultural emporiums, the fabulous Pinacoteca di Brera, which turned out to be entirely covered over by an exterior construction scaffolding, itself sheathed over with huge advertising scrims. To be specific, these: 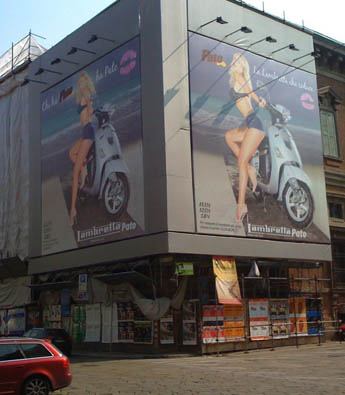 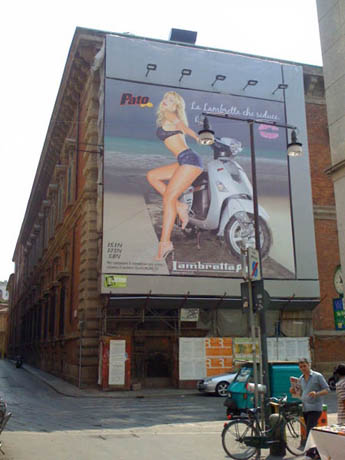 I’d love to be able to say that once I got inside the museum I found this: 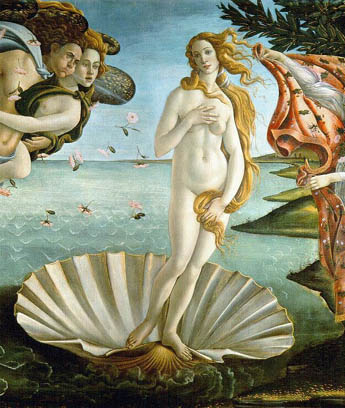 But that’s not exactly right. I did, however, find this:

The iconic Botticelli Venus on the Half Shell (or, more properly, The Birth of Venus) was, as it happens, in the next museum over (Florence’s Uffizi). But coming back to the advertising around the Brera, what was it other than a direct quotation, a contemporary mash-up of its Botticelli precursor? Venus on a Vespa.

Of course, in asking that question I am once again drifting into terrain previously covered, and covered much better than I ever could, by my master John Berger, whose 1972 Ways of Seeing has for years proven seminal to all sorts of us. Berger himself ends one chapter with the following note: 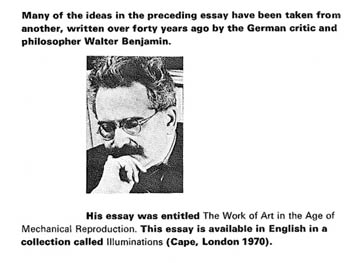 And, in like manner, I should once again acknowledge that everything in this entire convergence project (from the book through the contest) arises under the star of Berger.

Berger’s book was based on his BBC series of the same title, which itself had been a marvelously subversive riposte to the Civilisation series, Sir Kenneth Clark’s ur-public-television extravaganza of a few seasons earlier (the series that likewise got royally lambasted in Monty Python and the Holy Grail when the stuffily self-important academic providing learned background understanding of medieval mores found himself having his head sliced clean off by a knight on horseback who suddenly raced in from stage left). In the pages of Berger’s book, you will find passage after passage like the following, anatomizing the power and prehistory of omnipresent “publicity” (1970s British English for “advertising”) in late capitalism:

Why does publicity depend so heavily upon the visual language of oil painting?

Publicity is the culture of the consumer society. It propagates through images that society’s belief in itself. There are several reasons why these images use the language of oil painting.

Oil painting, before it was anything else, was a celebration of private property. As an art-form it derived from the principle that you are what you have.

It is a mistake to think of publicity supplanting the visual art of post-Renaissance Europe; it is the last moribund form of that art.

Publicity is, in essence, nostalgic. It has to sell the past to the future. It cannot itself supply the standards of its own claims. And so all its references to quality are bound to be retrospective and traditional. It would lack both confidence and credibility if it used a strictly contemporary language.

Publicity needs to turn to its own advantage the traditional education of the average spectator-buyer. What he has learnt at school of history, mythology, poetry can be used in the manufacturing of glamour. Cigars can be sold in the name of a king, underwear in connection with the Sphinx, a new car by reference to the status of a country house.

In the language of oil painting these vague historical or poetic or moral references are always present. The fact that they are imprecise and ultimately meaningless is an advantage: they should not be understandable, they should merely be reminiscent of cultural lessons half-learnt. Publicity makes all history mythical, but to do so effectively it needs a visual language with historical dimensions.

Lastly, a technical development made it easy to translate the language of oil painting into publicity clichés. This was the invention, about fifteen years ago, of cheap colour photography. Such photography can reproduce the colour and texture and tangibility of objects as only oil paint had been able to do before. Colour photography is to the spectator-buyer what oil paint was to the spectator-owner. Both media use similar, highly tactile means to play upon the spectator’s sense of acquiring the real thing which the image shows. In both cases his feeling that he can almost touch what is in the image reminds him how he might or does possess the real thing.

Yet, despite this continuity of language, the function of publicity is very different from that of the oil painting. The spectator-buyer stands in a very different relation to the world from the spectator-owner. The oil painting showed what its owner was already enjoying among his possessions and his way of life. It consolidated his own sense of his own value. It enhanced his view of himself as he already was. It began with facts, the facts of his life. The paintings embellished the interior in which he actually lived. The purpose of publicity is to make the spectator marginally dissatisfied with his present way of life. Not with the way of life of society, but with his own within it. It suggests that if he buys what it is offering, his life will become better. It offers him an improved alternative to what he is.

And then as well page after page of visual examples like these: 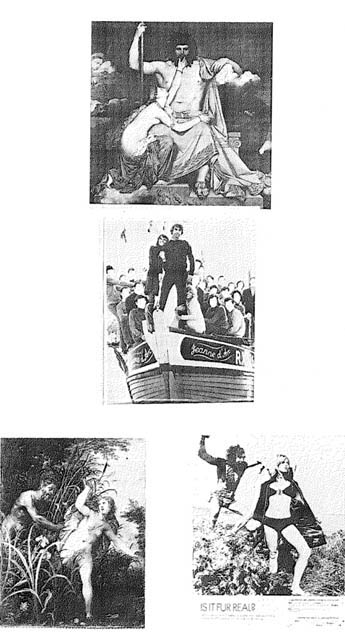 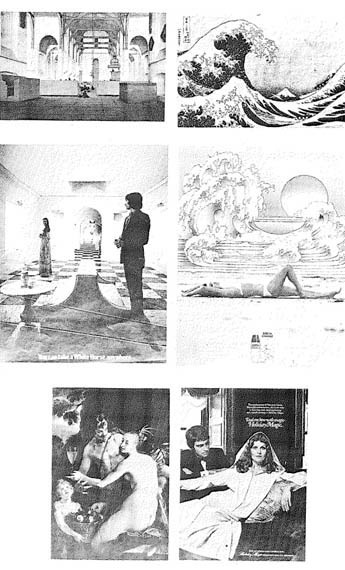 Enough said! Anyone who’s been dipping into this website who has not yet read Ways of Seeing should stop whatever they’re doing and go read it immediately. Everyone who has won’t need my urging to go back and reread it!