A Financial Economist Talks About Things We Should Know

Why We Have Debt

I was originally going to write this column about income inequality, but I am going to save that topic for the next post, because there is an issue that is pressing in light of the election less than one month away. One of the central topics of political discourse over the past several years has been the sizeable Federal deficit and resulting growth of national debt. This issue has been of particular concern to political conservatives and Tea Party advocates, who blame President Obama for spending too much and bankrupting the country. While I do not consider myself to be a political conservative, the deficit and the debt concern me as well. I worry that the level of deficit spending is unsustainable, and may result in significant detriment to our future welfare. Unfortunately, I do not think that it is particularly well recognized why we have deficits, and the political discussion surrounding them is, at best, misleading. 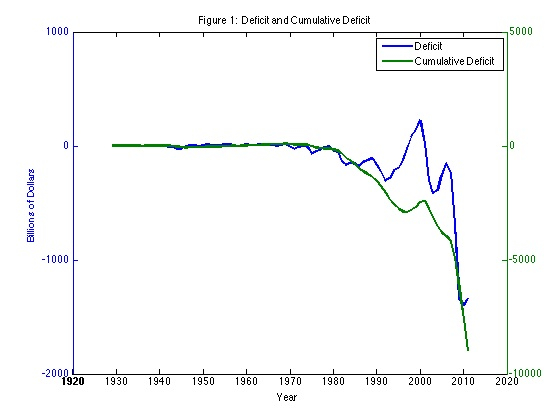 Let’s start out with a little background and look at the current and cumulative levels of the Federal government deficit. For this discussion, I am going to use statistics compiled by the Bureau of Economic Analysis (BEA). The BEA is kind of the government’s accountant, and publishes statistics on all sorts of interesting economic information. In Figure 1, I plot the current and cumulative levels of the deficit as reported by the BEA.1 The Federal deficit, plotted in blue, represents the difference in government receipts and expenditures each year. The green line is the cumulative deficit, which is the running total of accumulated deficits. This is approximately, but not exactly, the amount of net Federal debt outstanding. By the end of 2011, the running total was approximately $9 trillion, about the amount of net Federal government debt outstanding at that time.

The picture is a bit alarming. Up until about 1970, the government more or less balanced its budget. There were surplus years and deficit years, but on average, the government ran a surplus of about $2 billion over the period 1929 through 1969. Starting in 1970, the government began to run sustained deficits, and by 1982, the government had spent a cumulative total of about $80 billion in excess of revenues received since 1929. At this point, what was essentially a flat line accelerates into what looks like exponential growth in debt. The deficit really starts to go off the cliff in 2008 with a $600 billion deficit, and the government outspends its revenues in excess of $1 trillion in each of the final three years of data. So where is this deficit and debt coming from? Is it entirely due to the fact that the government provided a fiscal stimulus, or perhaps due to the bailout of the banking system? Do we have a deficit because income tax revenues are too low? Is there a mass of wasteful spending, or is the government spending too much on defense?

While all of these sources may contribute to the deficit, and our resulting national debt, they miss the elephant in the room. The main contribution to the deficit is that how much we pay into government social insurance programs is disconnected from how much the government pays back to us. In particular, we contribute far less into social insurance for health care than the government pays out. I don’t know about you, but when the topic of health care and health care policy comes up, my eyes glaze over. I still don’t know what the “donut hole” is, and find it hard to believe that I will ever get the motivation to find out. In addition, although I can’t legitimately call myself young any more, I’m still young enough that health care and health care expenses just don’t register on my radar. However, when it comes to talking about deficits, health care expenses are pretty much the entire ball game. 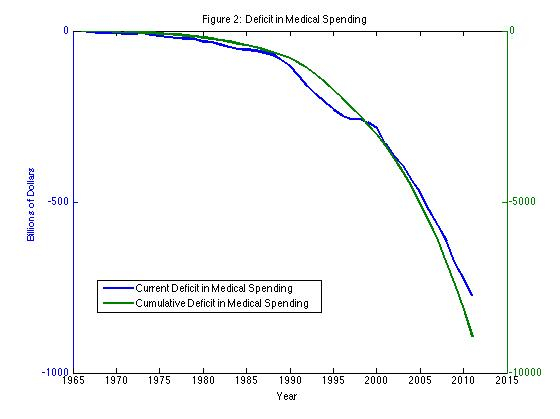 Figure 2 shows the difference between government receipts for Medicare and the amount paid out for Medicare and Medicaid.2 Just like the debt and deficit depicted in Figure 1, spending on medical care in excess of revenues shows exponential growth. In 2011, Medicare and Medicaid payments totaled $949 billion, while receipts for Medicare totaled $174 billion. This means that government spending on medical expenditures outstripped revenues by $775 billion, which represents 58% of the 2011 Federal deficit. Other revenue and spending mismatches account for the remaining 42%, but the medical expenditure mismatch is the overwhelming source of the Federal government’s deficit. Probably even more telling is the cumulative amount of the excess of expenditures over revenues. By 2011, this difference had cumulated to—you probably guessed it—about $9 trillion. 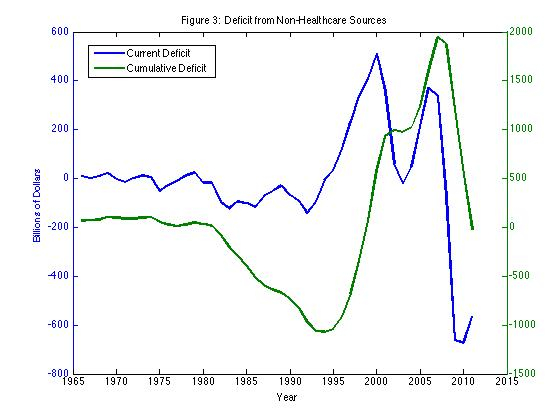 As a thought experiment, let’s suppose that medical expenditures had been self-financed since the inception of government health care in the 1960s. What would our debt and deficit look like today? To answer this question, I simply added the medical care expenditure deficit back into the total government deficit. The result is depicted in Figure 3 and is astounding (at least to me). Outside of medical expenditures and revenues, the Federal government sometimes ran a surplus and sometimes ran a deficit from 1966 until 1980. Starting in 1980, and lasting until 1994, the government consistently ran a deficit outside of medical spending, but from 1995 until 2010, it consistently ran a surplus. In 1994, the cumulative excess spending would have reached a bit over $1 trillion. But by 1999, debt due to sources other than medical spending would have been completely eliminated by surpluses! The government wouldn’t have needed to borrow again until 2011.

My point in all this is that we should not be distracted from the source of our fiscal problems. If a candidate for national office says that the deficit and Federal debt is a crisis and out of control, but does not provide a plan to rectify the differences in healthcare spending and revenues, that candidate is being disingenuous. I do not profess to have the solution to fixing healthcare in terms of taxation or cost control. I can simply say that under the status quo, what we pay for health care vastly outstrips the revenue generated to pay for it. As a nation, we need to decide whether health care is a benefit that is worth paying for. If we conclude that it is, we need to commit to a plan other than borrowing to fund expenditures on health care.

1 Specifically, the quantities are taken from the National Income and Product Accounts, Table 3.1, Government Receipts and Expenditures. The current deficit amount is Line 27, Net Government Saving.

2 I had to do a bit of a back of the envelope calculation here because the BEA does not separately back out contributions for components of social insurance. My calculation takes the percentage that Medicare taxes contribute to the total FICA tax, and applies this percentage to the total contributions to government social insurance plans by individuals and employers. This is actually conservative, because it allocates some of the contributions that employers make for unemployment taxes (FUTA) to Medicare.