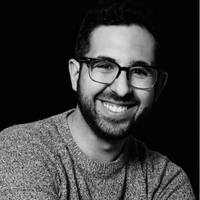 Evan Altshuler is a television producer, comedy person, dog-owner, and obvious Jew. He writes and performs regularly at The Upright Citizens Brigade (NightLate, Hint!, UCB Digital), and hosts the critics’ darling improv series, Live Dubbed Sitcoms in Brooklyn. He has appeared on IFC and in the New York Comedy Festival. This might sound really braggy, but he was one of the producers of The Marriage Ref on NBC.