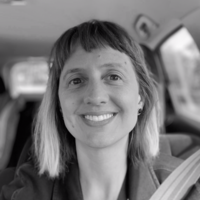 Shana Genre lives in Portland, Maine, where she forces children to read books. Her writing has appeared in Slackjaw, The Belladonna Comedy, Points in Case, and Balancing Act 2: An Anthology of Poems by Fifty Maine Women, for which she won the Editor’s Choice award. Much to the horror of her family, she sometimes performs stand-up comedy.