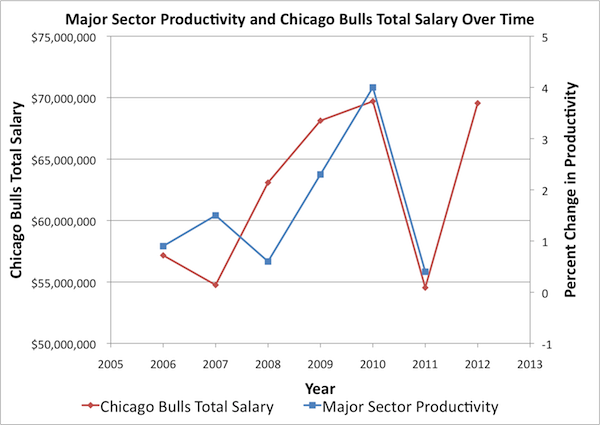 Like many Americans, I’m dying to read the Congressional Budget Office’s upcoming report analyzing the long-term fiscal impact of the Chicago Bulls potentially paying into the NBA’s luxury tax (which, I’m told is most certainly a “tax” and not a more nefarious “fee”). But because the wait was killing me, I went ahead and did my own analysis of how a large Bulls payroll impacts the United States’ economy. Needless to say the complexities of the ins are rivaled only by the complications of the outs, and it is certainly no wonder that the CBO is taking its time hammering out the details. The long and short of it, however, can be summed up like this: in recent years, a well-paid Bulls team has resulted in increased American labor productivity. This fact is important because higher productivity is a major driver of Americans citizens’ rising standard of living. It is therefore vital for the Bulls to provide a sufficiently large stimulus into to their payroll in order help American workers stay among the most productive in the world.

The Bulls are one of only seven teams that have never been required to pay the NBA’s luxury tax, a financial penalty levied against organizations that have total player salaries above both the “soft cap” (currently around $58 million) and the “luxury tax line” (currently around $70 million). Despite Bulls owner Jerry Reinsdorf’s aversion to paying the tax, he has said he’d be willing to pay it if his team has a reasonable shot at winning a championship. After drafting Derrick Rose, Reinsdorf made several moves that indicate he’s serious. Over the past couple years, the Bulls have committed to big free-agent signings like Carlos Boozer and necessary contract extensions for both Joakim Noah and Derrick Rose. Finally, it seems, the Bulls have started spending a little money—although not quite enough to put them over the luxury tax line.

Reinsdorf’s looser purse strings is good news for Chicago sports fans and American workers since these more expensive Bulls not only earned a league-best .756 win percentage during the 2010–2011 regular season, but labor productivity in America subsequently shot up 4.0% in 2010. That 4.0% annual increase in productivity was the biggest jump in eight years and coincided with a Bulls payroll that just barely squeezed under the NBA’s luxury tax threshold. So a bigger Bulls salary clearly correlates with higher American productivity. But what about the converse? Well, the smallest annual increase in worker productivity over the past decade occurred the following year when the Bulls’ total player salaries dropped by $15 million. The figures speak for themselves.

That brings us to this year. The Bulls salary cap conundrums have been widely discussed and analyzed over the summer by pundits, bloggers, and hopefully policymakers. The Bulls do indeed have big bills to pay this year: Rose will earn $15.5 million. Deng and Noah will make $13 million and $11 million, respectively. Boozer, somehow, will make $15 million. Unfortunately, these big salaries have left Bulls management in a position in which they were unable to retain crucial role players from last year’s “Bench Mob” such as Omer Asik and C.J. Watson. Worst of all, the Bulls have managed to sign their replacement players in such a way that they will legally be unable to spend more than $74 million dollars in total player salaries this year. I can already feel the average American worker producing fewer widgets.

Look, this isn’t going to be the Bulls’ year. Derrick Rose will be out for most of the regular season while recovering from his torn ACL. Luol Deng is likely to be hobbled by a bad wrist. No, this isn’t the season the Bulls beat the Heat. I know that. You know that. And you can bet your bottom million dollars Jerry Reinsdorf knows that too. Maybe maneuvering the team into this unfortunate tight salary cap spot is a blessing in disguise as it will allow the team to focus on generating a championship caliber team in the future rather than doubling down on a season already lost. That said, burning a year of Derrick Rose’s career is a big risk for both Chicago sports fans and the American labor force. Let’s just hope that next year Mr. Reinsdorf finds a way to increase the Bulls payroll, bring home a championship, and keep American workers producing at a world-class rate.