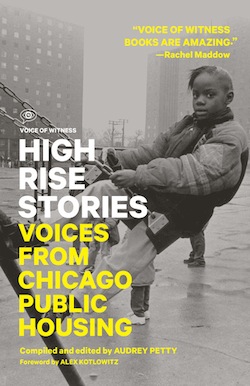 Read an excerpt from the book here.

In the gripping first-person accounts of High Rise Stories, former residents of Chicago’s iconic public housing projects describe life in the now-demolished high-rises. These stories of community, displacement, and poverty in the wake of gentrification give voice to those who have long been ignored, but whose hopes and struggles exist firmly at the heart of our national identity.

Today we offer a conversation about the book between its editor, Audrey Petty, and Stephen Elliot, author of seven books, mostly set in Chicago, including Happy Baby and The Adderall Diaries.

Stephen Elliot: When did you decide to do an oral history of the Chicago housing projects?

Audrey Petty: It was a conversation with my friend Peter Orner that first spurred me to pursue an oral history of high rise public housing communities. Peter and I met up around five years ago at a conference in Chicago, and we got on to the subject of the high rises that were being torn down in the city—places like Stateway Gardens, Cabrini-Green, and Rockwell Gardens. Robert Taylor Homes had already been completely demolished by then. I grew up on the South Side, and so I was stunned by the sudden erasure of all these structures that had been such a familiar part of the city. I’d read and heard about the Chicago Housing Authority’s plans, but still—it was something else to experience those enormous gaps in the landscape. The first thing I wanted to know was where people were going. The next question—the bigger question that felt urgent—was what had those places been like for those who called them home? Peter kept at me to follow my curiosity.

Stephen Elliot: I grew up in the same Chicago you did, and lived for a while in Hyde Park. As an adult I spent a few seasons in a squat against Cabrini-Green.

On the South Side of Chicago these huge housing projects were the dominant architecture. There were enormous high rises. I remember reading that at one time the Robert Taylor Homes along the Dan Ryan freeway were the largest housing projects in the world. And then they were gone. What happened to the high rises? What was the process first of them being built and then of them being destroyed?

Audrey Petty: Between the two world wars, hundreds of thousands of African-Americans migrated to Chicago from the South to find work in the war industries. Formal and informal barriers kept the city’s booming African-American population segregated to a handful of neighborhoods. Redlining and racially restrictive housing regulations came to define the map of Chicago, and the federal government under FDR’s administration upheld racial segregation in the earliest Chicago public housing in the 1930s. In the 1940s, some public housing complexes were built for soldiers returning from war, including African-American soldiers, but white residents in the Southwest and Southeast Sides formed violent mobs to keep these new complexes from integrating. Most of the public housing high rises were built in the mid-1950s and early 60s, largely in black neighborhoods. When the CHA geared up to construct new housing developments, it followed the official city map, where segregation was status quo, and land was cleared in black neighborhoods on the South and West Sides. In the case of Cabrini-Green, the first development there had been built in the 40s and was initially home to scores of Italian-American families, but by the time the high rises were planned, the Cabrini community was overwhelmingly African-American. Iconic high rises like Robert Taylor Homes, Cabrini-Green, and Stateway Gardens were inhabited for about 50 years. Then in the 1990s, the majority of the city’s public housing high rises were inspected by HUD and condemned. All but one of the CHA’s 52 high rise developments were targeted for demolition, a process that took until recent years to complete.

Elliot: Those high rises housed an enormous number of people. Where did they go?

Petty: Those residents who left as a result of demolitions moved in many directions. Some moved downstate to towns like Peoria and Springfield. One of the first people I interviewed had moved to Champaign, Illinois. Others moved out of state. But most families that moved out of the high rises remained in Chicagoland and moved to private rental units in neighborhoods on the South and West Sides of the city, or parts of suburban Chicago in lower-income, racially segregated neighborhoods. A small minority of families were given access to replacement housing in new, mixed-income developments on or adjacent to the land where high rise public housing once stood.

Elliot: You chose 12 interviews with former residents for this book. How many residents did you interview? How did you choose the ones you used in the book?

Petty: All told, our team interviewed 26 people by the time the book went to press. A dozen are featured in High Rise Stories. Their narratives were selected, in great part, because of their roundedness and complexity. Their stories zero in on important memories and their stories also suggest a great deal about the larger contexts of their own lives. What resonates with me is the mix of emotions that people expressed about their neighborhoods. With more time, there’s no question that the book would have been larger. Every person we met had important stories to offer, but we weren’t always able to keep the conversation going over time. Another factor in the composition of the book was diversity. After collecting a few interviews, I began to understand the necessity of speaking to narrators who represented different generations of experience, and I was also keen on finding narrators who came from a range of public housing communities across the city.

Elliot: Where did the residents of these projects come from?

Petty: In the early days, the housing developments offered improved living conditions for many folks who moved there. In the late 1950s, Dolores Wilson (one of the narrators in the book) and her husband were living on the South Side, and their housing options amounted to what she described as “fire traps.” They were looking for safer, more stable housing, and they found it when they moved to Cabrini. A good number of the narrators in High Rise Stories experienced their public housing community as children. Some remembered their parents relocating from other parts of Chicago. I also met a number of people whose families moved to Chicago from the Deep South and settled in the high rises right after arriving in the city. One woman I met, Jenny, migrated North with her mother and siblings in the early 1960s. They’d worked as sharecroppers in the Mississippi Delta and they moved into Stateway Gardens, where Jenny lived and raised her own family until shortly before they were forced out by the city’s plans for demolition.

Elliot: It’s interesting to note that many had regular employment. I’m thinking right now of Dolores Wilson, who worked for the city for 30 years and lived in Cabrini-Green for 53 years.

Petty: In almost all of these cases, narrators describe parents who worked, went to school, or a combination of the two. One of the youngest narrator’s mothers worked and still works full-time at a Wendy’s far out on the edge of the city. Another narrator’s mom went to school part-time and became a phlebotomist. Another narrator’s father repaired cars freelance and his mom worked part-time for a free breakfast program in the neighborhood. Mrs. Wilson lived in Cabrini for over 50 years. In addition to raising her five children and being a community leader in the schools and building management, she also worked for the city’s water works office. Her husband was a custodian on the grounds of Cabrini-Green.

Elliot: What I notice in the book is this weird contradiction. On the one hand there could be a lot of community in the homes. On the other they were violent places, poorly policed. Some of the residents have such fond memories, but for others it sounds like a terror.

Petty: People shared some of their most treasured and joyful memories in their interviews. The bonds made in these high rises were unshakable and sustaining. There’s a lot of laughter in the stories that nearly everyone shared with me. On the other hand, people recounted some of their most devastating experiences. Many narrators described the violent injuries or deaths of loved ones. Many recounted violence that they directly experienced or witnessed. In addition to gang violence, there was police violence and, more broadly, the structural violence they faced every day as their communities were systematically neglected. What was a revelation to me was this duality within single perspectives. When I first started this project, the high rises were landmarks to me, more symbols than complex communities. But what I can say now is that what all the interviewees shared with me radically shifted my perspective. I’m ever grateful to them for their generosity.