Funder Claps:
Hook Me Up, Playa!
by Lawrence Funderburke 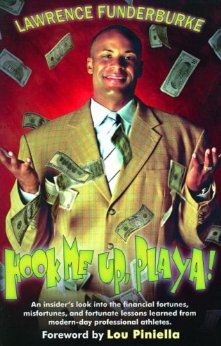 Under review:
Hook Me Up, Playa!: An insider’s look into the financial fortunes, misfortunes, and fortunate lessons learned from modern-day professional athletes
by Lawrence Funderburke
(Wetherby Press, 2005, 195 pages)

Even for dedicated NBA fans, Lawrence Funderburke is the answer to only very difficult trivia questions. The sweet spot of Funderburke’s career—actually basically his whole career, discounting a sojourn in Europe and a blink-length cameo for the Chicago Bulls—was from 1997-2003, when he played 15 minutes a night for the Sacramento Kings to provide hustle, rebounding, and a breather for All-Star forward Chris Webber. Even though the Kings were usually a playoff team in that era, the cowbells jangling from humble, raucous Arco Arena through to bemused television audiences across the nation, Funderburke never contributed to any of the things that make the NBA sexy and awe-inspiring. Since his childhood Funderburke has been able to do things on a basketball court that the rest of us can only do when we are deep in REM. But against the best competition in the world, his contributions on the court were as glamorous—albeit as essential—as a faucet, function dwarfing form.

In the 2012-13 NBA season, 18 players—two of whom did not appear in a single game (Andrew Bynum, Derrick Rose)—earned more money for their year of work than Funderburke earned throughout his entire NBA career. Combine that with the fact that Funderburke made his money from a basketball arena surrounded by farmland, and we have an unlikely candidate to write a book that aspires to provide all professional athletes with the savvy and foresight to successfully manage their newfound wealth. However, Funderburke is qualified: he graduated magna cum laude from Ohio State with a degree in finance, which is an impressive life accomplishment even if he were not also averaging 14 points a game for the basketball team. And, in those Sacramento years, Lawrence Funderburke earned over $15 million dollars, a bargain in NBA budget terms for a dependable but unremarkable bench player like Funderburke. However, in the real world—and it is worth mentioning that Funderburke does live in the real world—that is an incomprehensible amount of money.

An important thing to know about Hook Me Up, Playa! is that it is the rare book with a cover that wages an ideological war against the chapters it contains within. The front cover was assembled by a person who simply could not have read the actual book. In a baggy suit, Lawrence Funderburke nonchalantly gestures the money that charitably drifts like snowflakes around him—some of the bills are immaculate 50s and 100s captured at improbably front-facing angles; others are crumpled 1s—a hellish blaze somewhere behind him illuminating the scene in a menacing red, the book’s title superimposed across his waist, presented in a wacky electric neon font that a second-grader using WordArt in the Sierra Vista Elementary computer room, would probably have rejected for being too gimmicky. To judge the book by this cover, it appears that Funderburke has tossed off a series of name-dropping and detail-spilling tales to a ghostwriter about his decadent days and upscale nights holding down one of the world’s more coveted and public jobs.

In reality, the book is a levelheaded and sobering list of lessons about fiscal responsibility. At times Funderburke even dips into the same optimistically delusional tone of a textbook or syllabus: “Another good approach for athletes to educate themselves in this area is to use some of the time they spend traveling to read and learn about financial matters. Check the Internet or your local library for recommended reading.” Try to imagine a professional athlete strolling to the local civic center and loading up on his/her library card before a long road trip, or ignoring everybody else on the team plane while keeping his/her nose deeply buried in Your 401(k) for Dummies.

The book’s central refrain continually warns the newly monetarily endowed professional athlete about the world’s “hook-me-uppers”: those friends, shady acquaintances, and distant cousins who will emerge from all corners once a lucrative contract has been signed. The hook-me-uppers will proceed to ask the athlete for four- and five-figure chunks of that salary to help fund a “can’t-miss investment opportunity” or similar deal—your spam folder sprung to real life. So, the title Hook Me Up, Playa! is not a grinning catchphrase asking for another round of the world’s finer things. It’s the siren song of the shameless scammer who interprets the wealthy athlete as an unlocked ATM. For Funderburke, the threat of the hook-me-upper looms so large and inevitable that, like Lord of the Rings, his tale must be named after its antagonist.

As a person who has been too timid to even say hello to the handful of athletes I have seen in public, I am boggled by the fact that there are people who not only say “hello” but do so while trying to reach around into the athlete’s back pocket. Last year, I saw Kareem Abdul-Jabaar at a record store. I found a low-trafficked corner and then stood there, jaw agape, watching him browse through the jazz section. If I saw him in a record store again, I probably would end up doing the same. I just don’t want to interrupt his, uh, record shopping I guess. So I have very literally no idea what thoughts go through a person’s head enabling him/her to stride up to an athlete in public—or boldly dial the number to Lawrence Funderburke’s hotel room, which it seems plenty of tenacious hook-me-uppers have done over the years—and then ask for money. I suppose I had always assumed that annoying an athlete in public would get you wordlessly whisked away by two Kimbo Slice-sized bodyguards.

If the message about hook-me-uppers had not come so modestly and earnestly, I don’t think I would have believed that the hook-me-upper existed. But I guess the hook-me-uppers exist, and exist universally—Funderburke doesn’t limit his message to NBA players to athletes from a particular region. The way Funderburke describes his own stature: “I am but a small cog in the celebrity wheel of athletic notoriety, but for all the hook-me-uppers I hear from, I might be mistaken for the sheik of a wealthy oil-producing nation.” Funderburke also mentions that he once “lost roughly $100,000 on an investment deal that I was assured (by a trusted individual) couldn’t possibly lose.” Please appreciate this: even the one athlete savvy and knowledgeable enough to literally write the book on athletes handling their finances still sunk huge sums of money into deals gone wrong. If even Lawrence Funderburke has been done a dirty by a hook-me-upper, those athletes who have crumbled into bankruptcy seem a lot less depraved and maybe even deserve our sympathies—financial death by way of a thousand leeches.

There is endearing nobility in how Funderburke envisions his book: as something like a peace-summit accord between the professional athlete and the general public. Entire chapters are dedicated to etiquette—between athletes and media and fans—with Funderburke providing reasonable and thoughtful explanations as to why these interactions sometimes go awry, along with strategies to avoid future conflicts. The thumbprints of a ghostwriter cannot be detected; the reader only feels Funderburke’s thoughtfulness and dedication for smart finance, his passion project.

But, perhaps mirroring the nature of professional basketball—intense amounts of repetition with slight variation—Funderburke tends to give the same fiscal advice from a dozen barely different angles. For instance, a solid opening paragraph for the book, heavy on the finance and altruism at the heart of Hook Me Up, Playa!, can be found buried way deep on page 95, by which time the reader has already heard a variation on this theme many times:

“Hook Me Up, Playa! is meant to educate athletes—and young people in general—about taking control of their lives. It is also my hope to educate you, the public, about what it means to be a professional athlete, the good, the not-so-good, and the terrible. Every life, no matter how good it appears to the people in the audience or the stands, has its downside. We put the people who entertain us, who make us marvel at their skills and ability, on pedestals. Then we are surprised when they fall off because, as it turns out, they are every bit as human as the next person, and human beings do stupid things.”

Funderburke successfully shows that a nine-figure salary provides the athlete with plenty of undesirable struggles, worries, and obligations to go along with their astounding riches. It’s refreshing to know that there are in fact athletes that view money in the same common-sense, practical ways as the rest of—oh wait, what is this on the last page, Lawrence Funderburke?

“My ultimate lesson learned: Being a blessing to others (who haven’t breached the code of friendship) in spite of prior financial grievances with close acquaintances is necessary, but it doesn’t always have to be monetarily. This book is my gift to you, with no strings attached.”

Consider this one of the few gifts you’ll ever receive with a list price of fifteen dollars.