The Bears Fired Jerry Angelo,
But Is It Enough to Save the Economy? 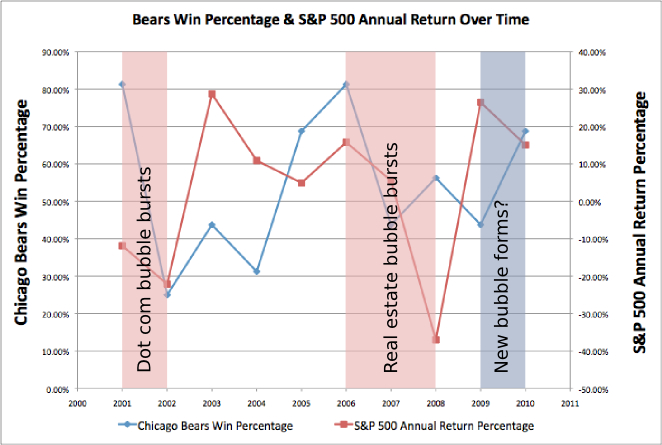 Most Americans are familiar with the two economic bubbles that severely disrupted the U.S. economy during the aughts: the dot-com bubble that burst in 2001 and the real estate bubble that began to deflate in 2006. Blame for these speculative manias have been hurled—fairly and unfairly—at myriad individuals and organizations. Many pundits blame politicians for lack of oversight. Fault has also been directed towards the financial institutions that gambled away the national economy for short-term profit. Still others blame regular, “main street” Americans who personally over-leveraged themselves. With so many accusations of stupidity and impropriety bandied about, it is a wonder that nary a word has been written or uttered regarding the most damaging catalyst of modern economic bubbles. This, of course, is a problem since all the well-meaning regulation our government can muster will be for naught if it doesn’t first address the market distorting effects of former Chicago Bears general manager Jerry Angelo.

To understand the economic bubbles of the previous decade, one must first understand another type of bubble introduced by the recently dismissed Angelo administration. These bubbles were and are created not by inflated stock prices or outrageous valuations, but by building a sub-par Bears team that nonetheless goes on to have an inexplicably fantastic season. Examples of “win bubbles” include a Chicago team that had no business going 13-3 and winning the division in 2001 and another that played in the 2006 Super Bowl despite starting Rex Grossman at quarterback. Like all bubbles, these win bubbles eventually burst, and chagrined Bears fans are left to ponder why they bothered to put on clothes and walk to the bar just to see their hapless team get crushed by three touchdowns to one of the lesser franchises in one of the lesser divisions in a game in which the opposing team was missing crucial members of their offensive line and were clearly outmatched on both sides of the ball. The pain, however, is not limited solely to Bears fans. Indeed, once optimism in the Bears’ future playoff opportunities falters, it is empirically demonstrable that economic bubbles will soon start to pop and the stock market will tank. This is the pain felt by the wider economy.

Jerry Angelo became the General Manager for Chicago Bears in 2001, inheriting a 5-11 club and a stock market that had already dropped 27% between January 1st and September 23rd when the Bears notched their first win of the season. The Bears then rattled off five more consecutive victories and went on to surprise sports and economic analysts by accumulating a 13-3 record. Fan expectations for the next season rose, and the economy appeared to stabilize. By the time the regular season ended with the Bears as an unlikely division champion, the S&P was up 21% from its 2001 low point.

Of course, that’s not the end of the story. After a brutal home playoff loss to the Philadelphia Eagles and a disheartening 4-12 follow-up season, expectations once again plummeted. This correction propelled the dot-com bust to new lows and lead to a -22.10% annual return for the S&P 500 in 2002.

As dramatic as the collapse of the 2001 win bubble was, it pales in comparison to the 2006 version. The Bears finished the previous season with a respectable 11-5 record and a trip to the playoffs. Fans, still skeptical from the previous bubble, were cautiously optimistic about the next season’s possibilities. To the (temporary) joy of Bears followers and economists alike, the 2006 season was even more spectacular than could reasonably be hoped as the team finished the regular season 13-3 and made it all the way to the Super Bowl. The stock market responded and the S&P 500’s annual return shot up to 15.79%.

Although pundits and fans were initially bullish on the Bears chances for the following 2007 season, a sense of unease slithered its way throughout Chicagoland after the ugly loss to the Indianapolis Colts in Super Bowl XLI. Those fears, sadly, were warranted. As the Bears tragically finished the 2007 season with a losing record, the S&P annual return dropped more than 10% from the previous year as the concomitant housing bubble began to burst. Unfortunately, a single year was not enough time to absorb all the disappointment endured by such a pathetic follow up effort to a promising Super Bowl season. Thus, by 2008, the win bubble that catalyzed the housing bubble that catalyzed the worldwide financial crisis was in full effect. The S&P’s annual return for 2008 was a ghastly -37.00%, and the world economy has yet to fully recover.

Heading into 2012, economists and Chicago sports columnists should be gravely concerned because all indicators show that Angelo has once again produced a win bubble. The Bears 2010 season ended in surprise appearance in the NFC Championship game—a game few analysts felt the Bears had a chance to win because there existed no good explanation for how the Bears got there in the first place. Not surprisingly, the Bears 2011 season was a disappointment, ending with a 8-8 record despite a relatively easy schedule. Sound familiar? It should: this sort of out-of-nowhere-wonderful season followed up by a heinously terrible season is the unmistakable indicator of a win bubble. Now that we’ve seen a win bubble, will we also see the bursting of another economic bubble in 2012? I certainly wouldn’t bet against it.

What can be done to stabilize the Chicago Bears success and subsequently the economy? Well, firing Angelo was a start: his tenure as general manager has been fraught with bubbles of all stripes, and the team/economy clearly needs a new direction lest the suffering continue. It is now up to all of us to hold the Bears organization responsible for putting a team together that is geared towards long-term success and economic growth rather than short-term playoff appearances with booms and shameful, shameful busts.