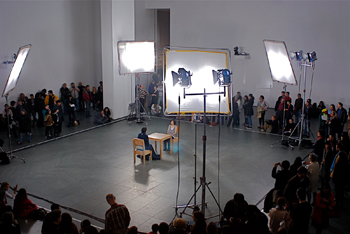 Marina Abramovic is entering the last few weeks of yet another of her astonishing performance-art endurance marathons, The Artist is Present, and you’d better hurry if you want to catch the last of this one: As part of her remarkably vivid and engaging career retrospective at the Museum of Modern Art in New York City, the Serbo-Croat artist is holding court, as it were, in the middle of the museum’s vast vault-like central lobby of the Museum of Modern Art, sheathed in a somber ceremonial gown at one end of a blank table in the center of a girdling square tangle of electrical cables, great kliegs atop tripods at the four corners of the square looming down over the uncanny scene, spectators gawking from all about the perimeter. She is holding court: which is to say anyone is invited to come up and take their place on the empty chair opposite her at the far end of the empty table (there are lines of people waiting to do so) and to meet her unflinching (if increasingly exhausted) empty gaze; she will not say a word. She has not said a word in months. And who exactly, that unblinking unsaying gaze seems to be demanding of each new tentative temporary interlocutor, who the hell are you? 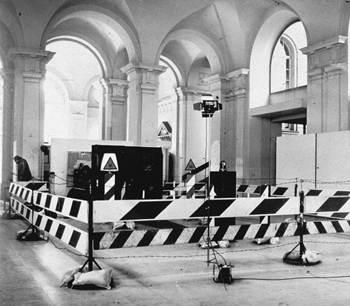 The piece, in its seemingly simple (if in fact quite existentially complicated and unsettling) directness, put me in mind of another such squared-up stared-down tour de force from several decades ago: Ed Kienholz’s Still Live, which was touring museums throughout Europe back in the mid-1970s. As I say, the same square perimeter, though Kienholz’s was framed by traffic barricades and barbed wire. Inside the square, along one far side was a lead wall and in front of which presided a comfortable throne-like armchair; along the other was a metal encased monolith ranged perpendicular to the chair, an alarm warning blinking atop its lid and the barrel of a gun, chest-high, poking out of the side facing the chair. Here too visitors were invited to enter single file, one at a time, to take their place on the throne, but only after signing a piece of paper acknowledging their understanding of the fact that the gun was in fact fully armed and loaded and the monolith housed a clockwork mechanism, a convoluted meshing of gears designed to fire the bullet into the heart of the chair at some random moment sometime between now and ten-thousand years from now. Another unnerving invitation to self-definition.

Kienholz’s version was as cool as Abramovic’s is hot. (Funny, incidentally, the way in which the authorities in each successive country dealt with the arrival of the work: in Germany, the police arrested and detained the entire piece, though not the artist, on charges of attempted murder; in Denmark, they ordered the curators to encase the entire gun-containing monolith in a gorgeously machined sheath of transparent bulletproof Plexiglas).

Myself: chickenshit, I suppose, I never took my seat before either. But standing alongside the perimeter of the Abramovic with all the other spectators the other day, and recalling the Kienholz, I found lines of Robert Frost thrumming through my mind. His marvelous poem “Fire and Ice,” to wit:

Some say the world will end in fire,
Some say in ice.
From what I’ve tasted of desire
I hold with those who favor fire.
But if it had to perish twice,
I think I know enough of hate
To say that for destruction ice
Is also great
And would suffice.

As it happens I’d been thinking a lot about that poem recently, what with the eruption of that havoc-wreaking unpronounceable Icelandic volcano a few weeks back. 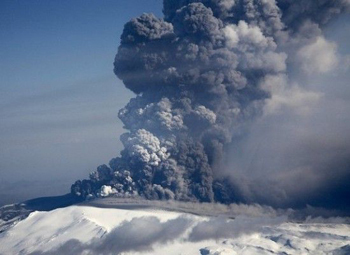 Or rather, about a further stanza I myself once composed for the Frost poem years ago.

On third thought though
For a Baked Alaska chaser
How ’bout volcano
Erupting under glacier?

And now, looking at Abramovic again, I realized that her gaze was in fact cool and steady (as cool and steady as Kienholz’s rifle snout), but just under the surface, boy was she smoldering.