So: I was meandering through a bit of an art walk on a recent visit to Chicago when, happening into a little show at the David Weinberg’s new exhibition space on West Superior, I found myself bowled over by a certain particular image. Actually, the gallery’s show included several uncanny pairings that deserve (and one of these days will receive) separate treatment in these columns, but the particular image in question, an anonymous photograph of an anonymous West African scene from 1911 (on loan from the incomparable anthropological archives of the Field Museum), 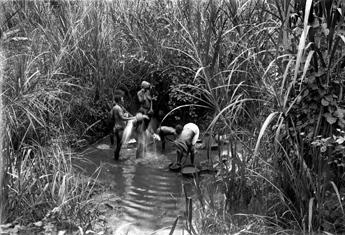 was a solitary one. Still, it caught me and held me and kept drawing me back. For of course it was not as solitary as all that, being rather the immediate occasion, the tangible anchor, for a shadow pairing, a primordially archetypical pairing, that went way, way back.

For what had I happened upon if not Diana and her maidens at their morning ablutions, momentarily oblivious as I pulled aside the surrounding foliage, wonderstruck and already entrammeled? Since, of course, who did that make me if not Actaeon, the all-time hapless hero of catastrophic misprision?

We all know about Actaeon, the Theban hunter who—or so the great Ovid tells us in Book 3 of his Metamorphoses—one day, out foraging with his hounds, indeed happened upon just such a sight and, while frozen by that vision of the proud virgin Moon Maiden, was himself suddenly seen. Enraged at such a violation, Diana cast water into his eyes and a curse upon his brow. Staggering away, with horns already beginning to sprout from his forehead (yes, antlers: antoeil in the French, which is to say “in the place of eyes”; augensprosse in the German, which is to say “eye-sprouts”), Actaeon sensed his legs buckling, his feet melding into hooves, he himself transmogrifying into a panic-stricken stag. And a stag, alas, already being hounded to its death by his very own dogs. Fortune par les miens me chasse! Or, as Chaucer’s friend John Gower parsed Actaeon’s fate in Confessio Amantis, his version of the Metamorphoses, the young hunter’s fate was “an ensemple touchende of mislok”—a truly marvelous four-way pun, for, of course, Actaeon had had the fate-ending bad luck to mislook upon Lady Luck …

(For a considerably more elaborated exegesis of the foregoing, see the final footnote to my own Mr. Wilson’s Cabinet of Wonder, pages 142–47, which itself owes a heavy debt to the Actaeon chapter in Norman O. Brown’s Apocalypse and/or Metamorphosis, pages 31–45.) 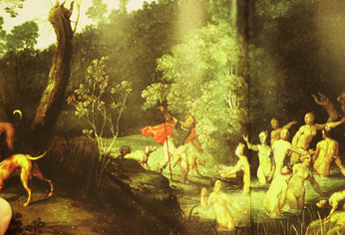 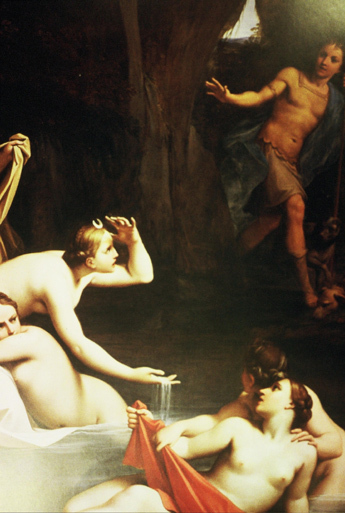 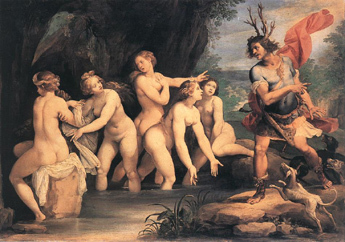 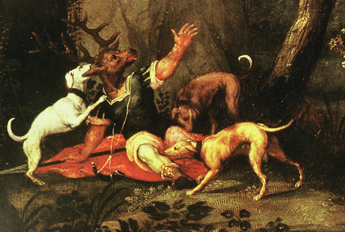 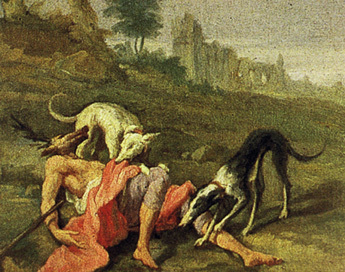 Myself, though, I’ve always been convinced that there are two other far more successful painterly accounts of the calamitous Actaeon / Artemis (Diana) situation embedded in the Western tradition, though I’ll admit that neither ordinarily springs directly to mind (and, for that matter, both may simply evince my own having sprouted antlers on the brain a long, long time ago).

The first is Velázquez’s, and I am thinking, for starters, of his Forge of Vulcan, 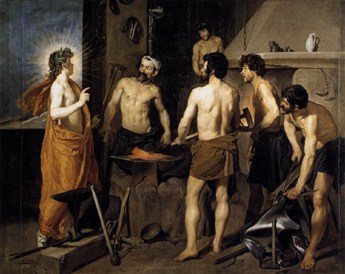 which ostensibly seems instead to be about its manifest subject matter, which is to say the epiphanous arrival of Apollo at the forge of Vulcan, bearing news of the scandalous betrayal of the Smith God’s wife, the love goddess Aphrodite, at that very moment languoring in the arms of Mars, God of War. Which, granted, is all fine as far as it goes. But look at the young lad there off to the side, literally drop-jawed in astonishment. 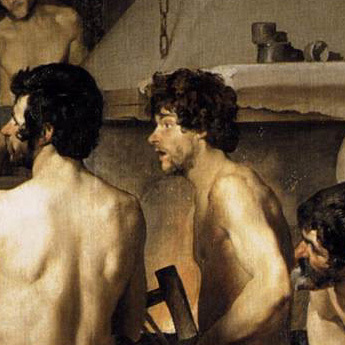 I’ve always fancied him an Actaeon figure through and through, his gaze if anything passing right through Apollo and onward to the true occasion for his desolate stupefaction, which is to say the languoring Love Goddess herself (perhaps as portrayed in that other Velázquez canvas, the Rokeby Venus of 1648) 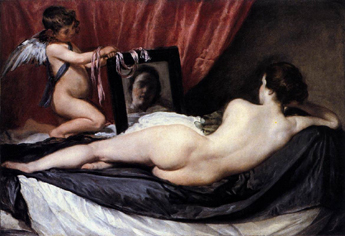 with voluptuous Aphrodite standing in, in this instance, for her sister goddess, the virgin huntress Artemis/Diana, who—look there in the mirror—is already lifting her lids to return his gaze, nailing our boy cold. 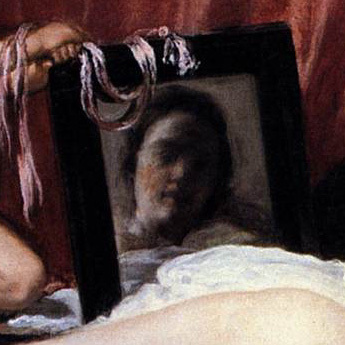 The second such instance, only a few years later, comes with Vermeer, who in one of his earliest extant works (1654) takes on Actaeon’s vantage of Diana at her bath with her maidens more directly. Though has there ever been such a chaste and inward-tending Diana? 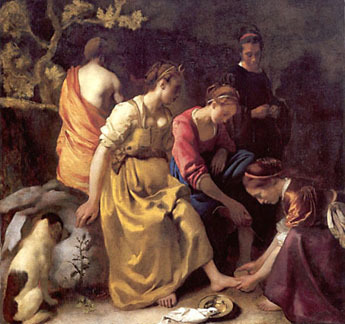 Except for that little prickly sprig of a bush beneath the goddess’s right arm (temporary stand-in for the antlers soon to come) and the still momentarily quiescent hound, the hapless Actaeon happening upon this scene might even momentarily allow himself the fancy that he is going to be permitted to escape his fate unscathed.

But in a moment she will look up, and Vermeer subsequently captured that look as well. For, as Edward Snow so masterfully demonstrated in the exquisite preface to his book on Vermeer (upon which I in turn based much of the analysis in the first chapter of my own Vermeer in Bosnia), from only just a moment’s ago having been looking away, the Maiden will now look up, fix us straight in the eye, and already begin to turn away once more, this time once and for all, 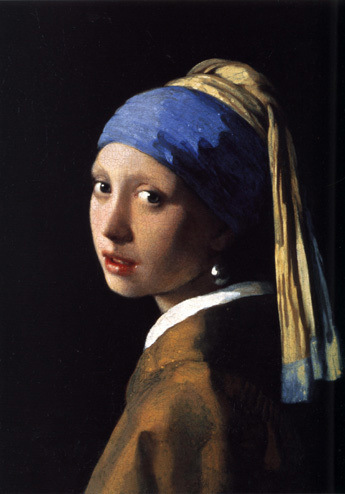 and it is we—us, you, I, him—who are now going to be reeling back endlessly, hopelessly slain.