The other evening—only a few weeks after I posted the “Laughing, Clapping …” convergence a few entries back, with its invocation of Solzhenitsyn’s account of that chilling incident, in the midst of Stalin’s Great Terror, when a provincial Russian audience, at the mere mention of the Great Leader’s name, whipped itself into a lather of frenzied applause, one from which it presently proved incapable of escaping (each rally participant terrified that he or she might be seen to be the first to stop applauding)—I had occasion myself to witness that scene’s uncanny obverse.

Long story, but I had been granted the privilege of attending the Chicago Lyric Opera’s premiere of Peter Sellars’s staging of John Adams’s Doctor Atomic, with its stunning evocation of the anguished passion of J. Robert Oppenheimer in the hours leading up to the Trinity test at the birth of the nuclear age—and, without going into a long summary of the opera’s plot or Adams’s bracing musical conception, suffice it to say that, as the story wends relentlessly toward its horrible climax, the bomb itself (which has loomed above the players, like a giant Medusa’s head, through most of the piece). 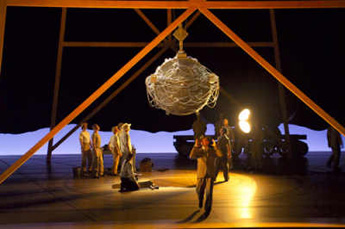 FIGURE 1. The bomb sphere looming over the singers.

FIGURES 2–3. The bomb sphere shadowed behind the drape. 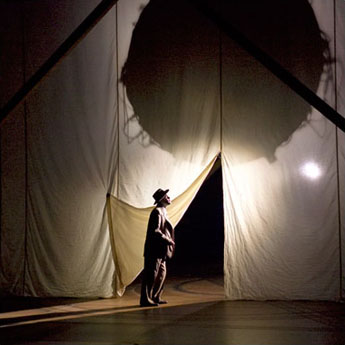 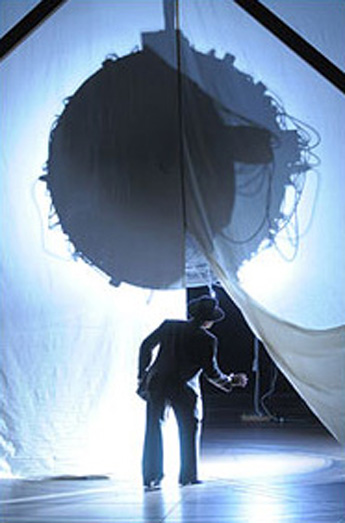 presently gets lifted out of sight up into the theater’s rafters (as the real thing was lifted atop its testing tower on the occasion of the actual test), and now, as the countdown enters its final minutes (minutes that seem to stretch and buckle under the pressure of Adams’s throbbing score), the entire cast and chorus, gathered on the raked stage (one minute and counting, 30 seconds, 20 seconds, 10), fall to their knees and then onto their bellies, sprawled out prone facing toward the audience, their heads tucked under their arms, ducking, waiting, waiting, the music throbbing, throbbing to its basso-crescendo (not an explosion, exactly; in fact, not an explosion at all; rather, simply the hugeness of what is happening becoming more and more palpably real), at which point, as their bodies start being bathed in this unholy light, they lift their heads in awe. We do not see what they are seeing;

FIGURES 4–8. The split seconds after the explosion. 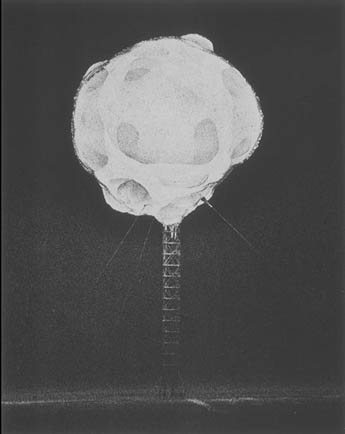 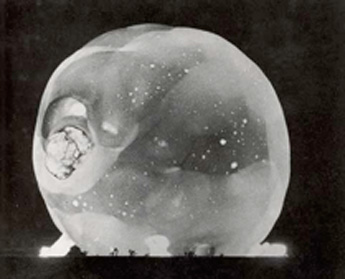 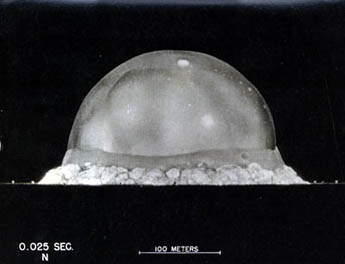 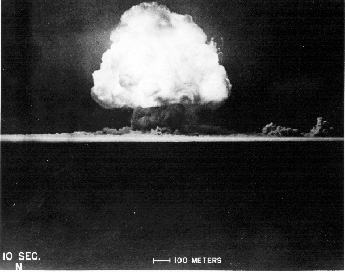 we only see them, staring out at us, awestruck, stunned to knowledge; 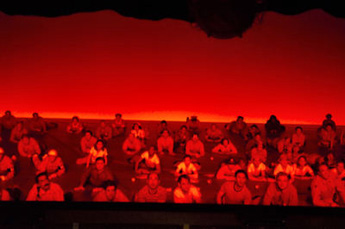 FIGURE 9. The cast, prone, staring out in the red light.

the music swells, then finally subsides (by way of a falling trill: a crackly distant woman’s radio voice, in Japanese); subsiding to silence, the piece ends …

And here is where things got truly strange: because, as the stage darkened, we in the audience could still make out the players up there, prone, staring out at us, and the silence was complete, total, all-enveloping, and it continued on like that, the utter stillness of this terrible dawning awareness, complete pin-drop silence, with us staring at them and them staring at us, it was time to applaud and nobody was applauding, us staring at them and them staring at us, seconds passing in the thickening gloam, minutes—two, three, maybe four, maybe even five (time was, in any case, continuing on like that, all taffy-contorted)—this incredible hush, no one daring to be the first to applaud, until, finally, a drizzly squall of clapping gusted over the auditorium, the spell was broken, and the place burst into full ovation.

Like I say, an uncanny obverse echo to the scene in Stalin’s Russia—impressing Stalin, of course, having been, as the opera’s libretto makes clear, the true motive behind both that Trinity explosion and the two Japanese devastations that quickly followed.

P.S. With regard to the Medusa’s head of the Trinity bomb, I am not unaware of that image’s rhyme with Chris Burden’s astonishing suspended dystopian planetoid of a sculpture from a few seasons back, now in MoMA’s collection: 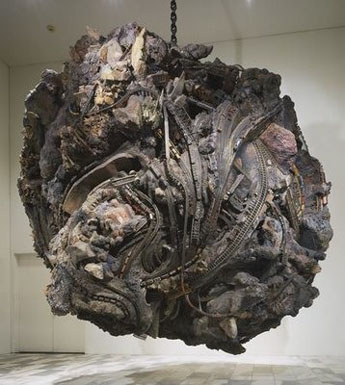