As it happens, the first book I picked up after emerging from Sennett’s Flesh and Stone (highlighted in the last entry) proved to be Steven Johnson’s Emergence, from a few years back (2001), and you can imagine my amazement at the paired images I encountered on its very first page, a nifty convergence in its own right, to wit: 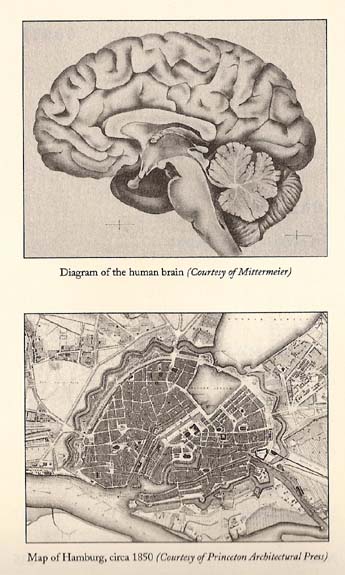 Frontispiece from Emergence: Brain and City

Now, Johnson, like Sennett, evokes the capacity of millions of undirected cells or individuals acting separately out of their own self-interested—or, at any rate, self-directing—algorithms, as it were, to generate a seemingly unified field of activity, be it a slime mold, or a jellyfish, or an ant colony, or a city, or the Internet. And he, too, cites such theorists as Adam Smith and Friederich Engels and (more recently) Jane Jacobs and Marvin Minsky as being central figures in the ongoing articulation of a natural philosophy of “emergence,” as he calls it. By contrast with Sennett, however, Johnson is much more celebratory of such bottom-up modes of organization. Emergence, for Johnson, is a never-endingly hope-riddled marvel. And key to the phenomenon, once again, is that there is no central command ordering all these phenomena, no king or dictator or…

Well, I found myself wondering the other evening (while attending a completely mindblowing performance of Osvaldo Golijov’s latest orchestral splendor, Azul, at the outset of this summer’s version of the Mostly Mozart Festival at Lincoln Center): What about orchestras and their conductors—and, for that matter, the scores from which they play and the composers who wrote them? 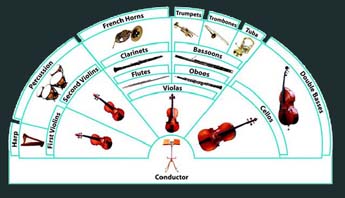 Note, for starters, the way an orchestra, seen from above, uncannily replicates that earlier view of the brain (and the city). In one sense, of course, an orchestra is an instance of leader-led and -shaped activity, hardly bottom-up at all (the conductor realizing the composer’s intention through the players he imperiously directs). That said, one is reminded of the way that earlier phrenologically steeped conceptions of the brain (in which a given capacity, even to the extent of, say, a particular memory, was thought to be located at a particular unique spot in the brain) have recently given way to a far more subtle and complex conception in which any given thought or capacity is distributed all about the brain, as it were, all sorts of neurons all over the place firing simultaneously and without any sort of top-down coordination, with all that pell-mell electrical activity going on to produce this (illusory?) sense of unified consciousness. Thus, for example, from Harvard neuropsychologist Daniel Schacter’s Searching for Memory:

One critically important idea is that the brain engages in an act of “construction” during the retrieval process. The idea is well illustrated by neurologist Antonio Damasio’s theory of how the brain remembers. Demasio and others have argued that there is no single location or area in the brain that contains the engram of a particular past experience. Posterior regions of the cortex that are concerned with perceptual analysis hold on to fragments of sensory experience—bits and pieces of sights and sounds from everyday episodes. Various other regions of the brain, which Damasio calls convergence zones[!], contain codes that bind sensory fragments to one another and to preexisting knowledge, thereby constituting complex records of past encodings. Damasio suggests that remembering occurs when signals from convergence zones trigger the simultaneous activation of sensory fragments that were once linked together. The retrieved memory is a temporary constellation of activity in several distinct brain regions—a construction with many contributors.

Precisely the way an orchestra produces a single heart-rendingly unified sound from the individual exertions of the dozens of its far-flung members.

Such that I end up wondering to what extent is an orchestra, too, like the brain, and in precisely which way? Does consciousness have a conductor? If not, how does it orchestrate its peregrinations?

In this context, it should be noted that Oliver Sacks is on the verge of coming out with a new book of his own, Musicophilia: Tales of Music and the Brain.