We’re here to help you with your periodicals crisis. You know the one, the question that hangs over your head like a dark cloud: which literary quarterly is most deserving of my readership this year? Friend, be burdened by this crisis no longer. Sign up for the McSweeney’s and Cabinet Combo Subscription and you can have your cake, eat it too, and then eat even more cake. There are only a couple more days to get on board! To celebrate these last beautiful moments of this momentous deal, we’re featuring an exclusive excerpt from Cabinet right here on the Tendency. This is one of the many gems you’ll find in Cabinet 53, which is the inaugural installment of the Combo Subscription, along with our very own Issue 47.

Enjoy! And nab a Cabinet/McSweeney’s Combo Subscription this week!

In an article in the Spectator in July 1711, Joseph Addison—one of the magazine’s founders, writing as the eponymous character Mr. Spectator—described his exercise routine. When in town, and therefore not able to go out riding, “I exercise myself an Hour every Morning upon a dumb Bell that is placed in a Corner of my Room, and pleases me the more because it does every thing I require of it in the most profound Silence.” We know dumbbells now as handy at-home pieces of gym equipment—free weights that have been around, in some form, at least since ancient Greek athletes used halters to increase the length of their long jumps. But the dumbbell that Mr. Spectator refers to, and from which the heavy gym weights borrow their name, is something different. An illustration of a similar piece of equipment, published in the Gentleman’s Magazine in 1746, shows a wooden contraption in which two crossed bars with weights on the ends are mounted on an axle, around which is wound a length of rope. This mechanism would be elevated within a room, or placed in a garret, with the rope hanging down for a person standing below to pull. It mimics the apparatus used for ringing church bells—but the bell itself has been replaced with the two weighted bars (and it’s these that resemble the dumbbells of today). 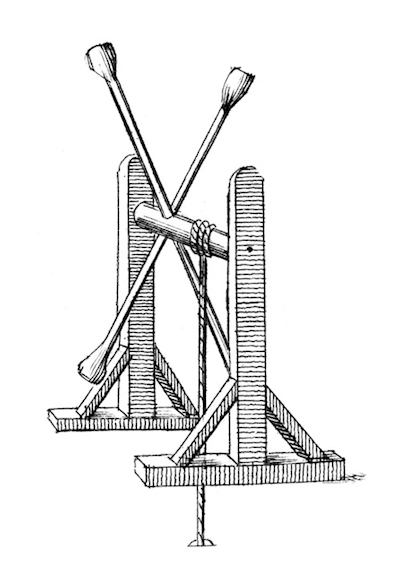 Bell-ringing as exercise. By replacing the noisy bell with two weighted bars, the apparatus could provide a silent workout. From The Gentleman’s Magazine, 1746. Courtesy Houghton Library, Harvard University.

Ringing a bell, in private apartments, is here a form of quiet exercise; a church bell—a clanging, public, noisy thing—becomes, in the dumbbell, an object whose silence is its greatest asset. How did something as loud as a bell—something which is experienced so much more often, and more powerfully, by hearing than by sight—become dumb? The answer lies in the extraordinary fate of English church bells in the century before Addison was writing and, in particular, in the invention of change-ringing: a technically and intellectually demanding new way of ringing bells, based on the principle of constant but controlled change. Change-ringing, known (from the nineteenth century onward) as campanology, is still practiced in England: it makes that pleasing jumble of pealing sound often used in films as an easy aural symbol of a wedding, a noise so ubiquitous that its underlying form is easily missed. In the second half of the seventeenth century, this new kind of ringing was a major craze in England, and the possibilities of its complicated system made people think about bells in a way that detached them from their older, and other, functions.

Until the middle of the sixteenth century, English church bells, like other European bells, had a variety of uses: some sacred, some secular, and many that were both. Bells called congregations to church, and told them to flee if there was a fire; they rang to signal a death in the parish, and they rang to help the passage of the souls of the dead through purgatory; other bells, or other ways of ringing the same bells, commanded people to say a particular prayer. Bells were incredibly well-loved by their parishes and were often baptized and given godparents; their individual tones were voices which spoke to the communities over which they rang. They were among the loudest sounds in the soundscape, and a church’s bells made up a language that its parishioners, within earshot, would understand.

In the Injunctions issued by the ten-year-old king Edward VI in 1547, these many and varied uses for bells were drastically reduced. Only one bell was now allowed “in convenient time to be rung or knelled before the sermon.” Bells were so useful that a single one was still to be used to call the godly to church, but in this new post-Reformation England, their other uses were no longer officially approved. The dead didn’t need help through purgatory, because it no longer existed; there was no need to command anyone to say popish prayers such as the Ave Maria by ringing the Angelus bell, because these prayers were now deemed useless. In fact, however, there was such affection for church bells that this particular injunction was never seriously enforced. Parishioners went to great lengths to keep their bells, sometimes by burying them until the zealous storm had passed.

What all this meant was that, despite the curtailing of their liturgical uses, at the beginning of the seventeenth century a lot of church bells remained hanging in church towers. Ringing them was an activity pursued with great enthusiasm, often by groups of boozy young men. Paul Hentzner, a German lawyer who travelled through England in the final years of the sixteenth century, wrote that the English were “vastly fond of great noises that fill the ear, such as the firing of cannon, drums, and the ringing of bells, so that it is common for a number of them, that have got a glass in their heads, to go up into the belfry, and ring the bells for hours together for the sake of exercise.” It was in these long, beer-fuelled ringing sessions that change-ringing was invented, as a codification of the disorganized ringing that Hentzner describes. It seems to have started in London and south-east England in the early seventeenth century; it spread, and by the 1660s was a fashionable recreation, with societies springing up all over south, central, and eastern England to further the practice. Bells were still useful as signals, gathering and scattering the communities over which they rang; they still operated as important symbols, too. But change-ringing was an innovation which overlaid, and operated in parallel with, the other signals and symbols that the bells rang out. Whereas other Protestant countries repurposed their bells to play musical tunes, as in the carillon popular in the Netherlands, change-ringing was the English answer to the question of what to do with these leftover Catholic objects.

“The strange operation & mistery of numbers.” Peter’s Mundy’s notation of all possible changes on three, four, five, and six bells in his travel journal “Itinerarium Mundi.” Entry made after Mundy’s visit to London in 1654. Courtesy Bodleian Library, University of Oxford.

Change-ringing operates on a simple but strict system of permutations. All the bells in a church tower are rung in rounds; each ringer rings a single bell, and the bells are hung such that the ringer is able to control the sound, making the bell strike once and only once per pull. Every bell must be rung once in each round, and the order in which the bells are rung (that is, the order of the round) may never be repeated. Change-ringing notation uses numbers, with each number standing for a bell. If a ring of five bells starts ringing from highest bell to lowest, with 1 representing the highest bell and 5 the lowest, the first, orderly round can be written as 12345. The following round might be 21345, then 23145, and so on; each new round is known as a change. The aim is, in theory at least, to exhaust all the possible orders in which the bells can be rung, without ever repeating a round; different ways of exhausting all the possible orders are known as “methods.” Strict rules govern which bells can swap places with which, and ringers developed a terminology—words all full of motion: bobs and dodges, hunts and “extream” changes—to describe the various swaps in the order that the bells need to make so that they successfully exhaust the circuit and return to the original round, 12345.