An Excerpt From Mike Sacks’ New Book Passable in Pink: The Novelization 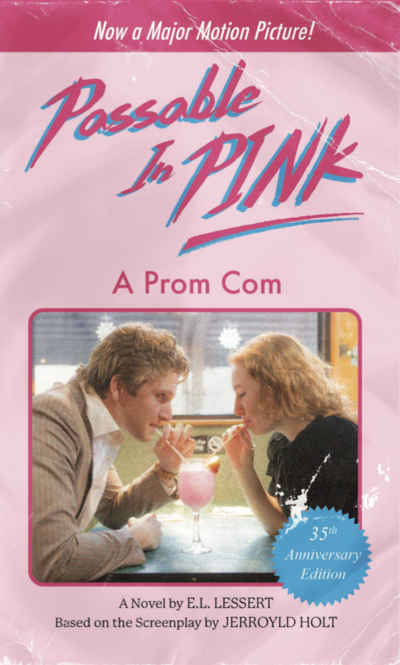 The following is an excerpt from Passable in Pink: The Novelization, originally published in 1982 to coincide with the film of the same name, and now being republished by longtime McSweeney’s contributor Mike Sacks’ press Sunshine Beam Publishing. It’s one of his favorite (little known) movies and, for better or worse, it accurately captures what life was like for teens in the early 1980s.

Except from Chapter Two:
“At the Mall”

…. “Oh my Lord,” exclaimed Addy, palm clutching her forehead as if she were about to faint.

“He dressed left,” muttered Kristina, staring at his crotch.

“What does that mean?” Addy inquired.

“One day,” Kristina said, giggling, “you’ll know.” Addy looked forward to seeing her first real-life penis. She imagined it would look stunning — sleek and neat and super clean — with luscious curves, a flawless triple combination of hue, texture and warmth.

And if it didn’t?

She’d just accessorize it with repurposed bangles and lightly clinking magical bells. She would improve on it with feathers and other good-luck talismans until it looked bewitching.

“How many times are you going to say Lord?” complained Grimer, annoyed. Whether he was upset that his comedy routine hadn’t earned as many laughs as he had hoped, or whether he was merely jealous that Addy was no longer paying enough attention to him, or whether the viscous peachy liquid suppurating from the third-degree burns he’d given his forehead earlier were irritating him, was not entirely clear.

What was clear was that Addy was in love.

He’s a total buck, Addy thought dreamily. A bohunk! That fresh-swept haircut! It must have cost $30!

“You’ve never seen Roland McDough?” asked Grimer, an edge to his voice. “As in ‘McDough’s got the dough?’”

And then in a very managerial tone, Kristina announced: “You can walk into the store, you know! We’re safe, I promise you! We won’t bite.” She paused. “Unless you ask nicely.”

Roland McDough — windblown blond hair perfectly set in place, modeling loose and cool khakis, wearing a wrinkled gray linen jacket, a white shirt open at the bottom collar, and a facial tan primed while observing a Hispanic mow his exceedingly large lawn for an entire hellishly hot afternoon — grinned. It was a shy grin. A grin that if it could talk in a mid-Atlantic accent and not in a grating Chicago inflection might lock-jaw: I do have a lot of money.

This boy… oh, he looked so very crispy.

Addy smacked Grimer directly on his bony shoulder. He made a great show of acting hurt.

Roland, not seeming to notice or care about the crazy antics taking place before him, continued: “I… I’ve never visited this end of the mall before. It’s… certainly most interesting. I am here because I would love to buy a button.”

“A funny, alternative button?” asked Kristina. “If that’s the case, we’ve got whatever you need!”

Kristina pointed to a rack that contained all manners of incredibly hilarious buttons, including one that read: “Frankie Says Fuck Off.”

“No, not at all,” responded Roland. “A normal button. For a white Izod. Mine fell off. While tending to my championship mare, Whinny.”

“I know his name,” responded Grimer, annoyed. “I told you that.”

Meanwhile, at the entrance to the store, Roland took a giant step back. He looked perplexed. He hated being confused.

He also hated being hated. Not from afar, necessarily, but up close. Too messy. Too much work. “Let me correct myself,” cravatted Roland. “My horse is technically a castrated male. A gelding. And mine is a miniature. But I liked the name Whinny so very much. That was my grandmamma’s name. She died. Of old age. And, in some sense, bullet wounds. But she wouldn’t have been at the dialysis center on that fateful day if she wasn’t old.”

Kristina took a small step forward, carefully, so as to not scare the puppy-like creature cowering at the store’s entrance. And then, very slowly and without a sudden movement to so much as frighten a gentle Richie, she soothed: “No. This end of the mall does not have those types of buttons. Have you tried The Tasseled Loafer on the other end of the mall? It’s next to the store that sells gag cassettes for outgoing messages, After the Beep for Cheap.”

“I would, yes,” said Kristina, as if speaking to a three-year-old.

Roland didn’t move, only sluggishly bobbed and weaved. He looked similar to a kidnap victim blinking out a distress signal in Morse code. At long last, he gave a slight smile and a limp wave. He retreated, the lingering odor of Ralph Lauren Polo’s delightful “in your face and up your ass” cologne the only evidence he had ever stopped by.

This, too, was only sold in the rich part of the mall, as well as the fancy atomizers that dispensed it.

“That guy,” said Grimer. “Wow. He definitely ain’t the sharpest loofa in the golden shower.”

“No,” said Kristina. “Nor is he interesting. But he is single. I do know that.”

“Why?” asked Addy. “How is that even possible?”

“How?” answered Kristina. “Because he’s more dull and useless than those endless fund-raising segments that interrupted those awesome Live Aid musical acts!”

Addy still had her palm on her forehead. She didn’t care. He was a Richie. And handsome. What else did a girl need?! The fantasy she had thought about for so many years had finally come true and it was better than she had ever daydreamed: A Richie shows up at the entrance to the store where her best friend assistant-manages and asks a question that makes very little sense. Richie tells a story that goes nowhere and isn’t very interesting… all the while, Addy remains all pouty and mum.

Oh, it was delicious!

Long gone was Addy ever caring that her parents had forgotten the anniversary of her first period!

How silly that all seemed now!

See ya in the rearview!

It wasn’t until a few hours later, back in her pink-encrusted room, with her brother Justin out in the hallway attempting — without much luck — to teach Chonger the very American skill of mocking anyone who appeared slightly different, with Addy tightly squeezing Yarnkin and gently slow-dancing to Spandau Ballet’s “True,” a song that just had to have been written especially, for her, her father downstairs hard at work creating a new advertising campaign for garbage food sold throughout the world at incredibly reasonable prices to college students and the middle-aged who’d long ago given up, and with Addy’s mother in the kitchen drunkenly chopping spinach for an imaginary Caesar salad, that it all, finally, began to seem real.

And it would be at that very moment that Addy knew — without a shadow of a doubt, as sure as she ever knew about anything — that before the year was over, a certain sophomore named Addy Stevenson would be attending the prom with a certain senior Roland McDough, he of the north side of the lake.

Roland McDough, he had a lot of dough.

And he would soon have a lot of Addy.

Addy (still stranded on Planet Hormone within the Electric Salamander) closed her eyes and — swaying gently from side to side — began to daydream about an amazing future that had all but seemed impossible mere moments before.

Addy felt as if she were now riding a grinning dolphin beneath a Fruit-Roll-Up-hued rainbow. A pink rabbit sat just off to the side, leisurely playing the lute.

Now he was the one who wasn’t wearing pants.

It was French-kissing a setting sun.

Passable In Pink: The Novelization
is available for purchase everywhere, including here.

Bring home this jaunty limited-edition T-shirt from illustrator Oscar Grønner FREE when you subscribe by June 20. Available in icy blue or summery green and guaranteed to sell out, preorder yours today.