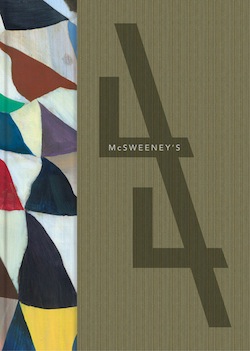 It’s not every year that we get to release a palindromic-numbered edition of our quarterly—and with this next one, out in just a few weeks, we’ve taken that responsibility very seriously. Are there tremendous new stories from Rebecca Curtis, Stuart Dybek, Jim Shepard, and Joe Meno? There are. Is there a symposium on the man Errol Morris calls “The Most Annoying Public Intellectual in America,” with contributions from Geoff Dyer and Ricky Jay and David Hockney and Jonathan Lethem and Mr. Morris and many others besides? There is! Is there, even, an eye-popping novella from Wells Tower, set deep in one of Thailand’s strangest prisons, full of such intrigue and humor and violence and life that it will leave you dazed, wandering the streets, entreating others to subscribe to McSweeney’s as soon as they can? There is, and we want you to be safe out there, but we really think this one is worth the risk.

We’re revealing the first bit of Wells’s story today—to read the rest, along with all the great stuff that surrounds it, you need only make sure you’re subscribed. And today, and for the rest of this week, we’re taking $5 off the price—so don’t delay! This is a good one, and there’s much more to come.

FROM WELLS TOWER’S
“THE DANCE CONTEST”

One afternoon at the start of the rainy season, Captain Surongporn, warden of Thep Moob Men’s Prison, orders all inmates to the Zone B yard to hear some jolly news. Surongporn is only four months into his leadership; the prison, a former military fortification built in the reign of King Rama V, has been in operation since the end of World War II.

Surongporn’s leading feature is a compact balloon of abdomen, proudly snugged in a brass-button shirt cut from lemon-colored cloth. He is a swaybacked little fellow built like a jellybean. The fourteen hundred men sitting or squatting before him all wear underclothes or cutoff pants. Nearly all are barefoot and shirtless. A few vain fellows, aristocrats for whom a suntan spells disgrace, hunch beneath broken umbrellas. Captain Surongporn looks shyly pleased with himself. His mien of coy potency resembles that of a gifted seven-year-old gymnast readying herself for her first public walk along the balance beam.

“My friends,” he says, “I hope all of you are having a mellow and productive day. Perhaps you feel surprised that I say ‘friends.’ Well, you deserve to be called by that word. Three months ago, I came to you seeking assistance with several problems. Inmates doing bodily harm to each other was a problem. Drug casualties were a problem. Another problem was videos filmed on contraband phones, videos which referenced conduct that is unbecoming to you and unbecoming to this institution. One more problem was some chattering birds who told false stories to the BBC about conditions in our facility. Three months ago, I asked for your help with these problems, and there has been no trouble since.”

He smiles, showing beige teeth not much larger than the kernels of young corn.

“You have all cooperated in the suppression of bad elements, and we are now in a mellow time. And so I call you my friends.”

A young man named Ter translates this information for Ron Tolenaar. “Yeah, a mellow time,” brays Ron, Ter’s patron and house boss of Dorm 23, Zone A. “Five men out the ghost door last month. Keep doing like this, the Moob will be a nice, quiet place. You won’t hear a fucking sound but the waves and the birds going ‘tweet.’ ”

Ron is 6’7", wears a size fourteen shoe. His lips, nose, and eyes bulge from his large crimson head, which looks like an infected thing that wants to be lanced. Ron is serving his first year of a forty-year sentence for exporting prostitutes stuffed with narcotics to Holland, his fatherland. Ter, his cellmate, is small and mantis thin. He is seventeen years old and serving no sentence at all. Before his death, Ter’s uncle—Ter’s last living relative—was a warder here, and he and Ter lived in an apartment off the seaside gun gallery. Pancreatitis killed the uncle in December of last year. In deference to the uncle’s memory, the assistant warden has arranged for Ter to stay on in Thep Moob.

“Not five, I think,” says Ter, his voice lowered to a whisper he wishes Ron would match.

“Yeah, five: three ODs, plus one AIDS, plus my man Julio, the Mexican faggot the yellow boys whipped,” Ron intones at bullhorn volume, drawing the scrutiny of three yellow boys, high-ranking trusties kitted out with yellow shirts and white clubs. He meets their gaze sneeringly. The pineapple hooch Ron has been drinking since daybreak has put him in an heroic bent of mind. “They bashed his face to marmalade. I guess he is pretty mellow now.”

“Would you be quiet, please,” murmurs Declan Weyde, one of Ron’s on-and-off roommates in A-23. “The Captain’s not talking in terms of reality. He’s talking in terms of, ‘Yeah, this summer was a mess, but no one said shit about it.’ He’s happy. It’s a good thing. Shut up.”

Declan has been in Thep Moob six years. When people ask him, he says, not very credibly, that he is serving an indefinite sentence for stealing a coffeepot. Declan’s actual crime is a mystery of not much interest to other inmates, necessarily obsessed with their own survival. Ron’s jabbering, he worries, will draw the yellow boys’ attention to the elderly bronchial case who lies beside him, unconscious. Those caught napping during assembly are often made to run laps in the concrete courtyard on naked knees. This might kill the frail man, who is, after a fashion, Declan’s friend.

“None of you people here has any balls,” Ron says. “I really liked that faggot. Okay, he was a short-eyes—so what? People dig what they dig. He was a funny guy, the Mexican. Somebody give me a computer. I’ll say shit to the whole world.”

“Man, there aren’t two people within a thousand miles who want to hear you talk,” mutters Declan. The old man, who is suffering through the early stages of Pontiac fever, makes a sound in his throat like rock salt being flung against a chalkboard. He spits feebly. Rusty sputum darkens his moth-colored beard. The man is large and sickly pale, with a belly like a raw pork bun, rubbed to gleaming hairlessness by seventy years of textile friction. His only garments are a pair of maroon BVDs whose elastic is scalloped due to tensile breakdown. The leg welts swag away from the man’s skinny thighs, displaying a crepey poundage of urological tackle. He is, in Declan’s eyes, a man past all caring, and Declan worries that he will die very soon.

The old man himself is not frightened by the prospect of death. He is the Ralph D. Hepplewhite Distinguished Professor of Economics at Conant University, and he believes himself to be a rational person. By his own measure, he has lived a full and venturesome life, and it seems to him fitting that it should come to an end in a foreign land on a warm autumn day by the sea. The man is an American, and he is my father.

His name is Osmund Tower. The letter we will receive about his days in death’s mudroom is not, as my mother puts it, “a masterpiece of earthly reflection.” It will contain nothing much in the way of a farewell, and no specific mention of us, his family. This will appall my mother and my brother, who will hear a passive cruelty in the blitheness of my father’s tone. Let it go, I will tell them. Let us think the best of him.

At the assembly, Ron Tolenaar goes on voicing his drunken complaints about the death of Mexican Julio. A yellow boy waggles a truncheon at him. Ter pats Ron on the arm. “Yeah, maybe good shut the fuck up, Mister Ron,” says Ter. “You stink like a party. You don’t want they come to the dorm and take the fruit and jars and tubes.”

Ron sees the wisdom in this. For the time being, he closes his mouth.