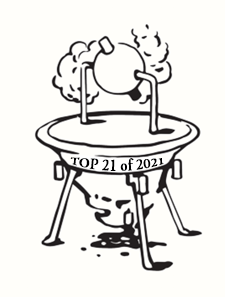 Every woman deserves to know exactly what’s in her birth control. Rush is a Canadian progressive rock power trio whose golden era is generally considered to be from 1975 to 1982. Thankfully, for your long-term family planning strategy, the band has an extensive discography that spans from 1974 to 2012.

The music of Rush is marked by erratic signature changes, unconventional chord structures, heavy use of synthesizers and electronic effects, and, most importantly, lead vocals that sound like an ancient witch is being exorcised out of your body with live wires. In less clinical terms, imagine taking the most annoying parts of science fiction and Libertarianism, isolating them, and then somehow blending them up into a cursed musical slurry. Then, infuse that slurry with a distinctive incel vibe, and presto! You’ve got one of the most powerful contraception options on the market.

How effective is it?

No one has ever gotten pregnant while listening to the music of Rush. Clinical studies show that when combined with watching a male sexual partner play air bass along to the extended solo in “Freewill,” the contraceptive efficacy of Rush approaches 100%.

Will I experience any discomfort?

How does it work?

The music of Rush is a tri-modal contraceptive, meaning it acts on three biological systems—endocrine, reproductive, and psychological. Together, this system is known as “Surge, Purge, and Loss of Urge.”

Surge: When a woman hears the ill-considered, stereotypical East-Asian riff at the beginning of “A Passage to Bangkok,” her pituitary gland floods the system with the hormone disgustagen. You’re familiar with this naturally-occurring hormone as it’s released by your body when your male colleague tells you to smile or when someone says, “You’re cute when you’re angry.” This makes Rush a safe, natural alternative to copper IUDs.

Purge: The purge phase begins when the vocals kick in. You’ll think you’re hearing jaws of life prying open a metal car door after a devastating accident. This is actually the testicles-in-a-vise banshee wail of vocalist and bassist Geddy Lee. His countertenor falsetto, combined with the surge of disgustagen, work in concert to trigger a panic response in the ovaries. Your reproductive system intuitively knows that it should not bring a child into a world that would reward this music with success. The ovaries will start tossing eggs overboard like they’re bailing out water from a sinking canoe.

Loss of Urge: The first two contraceptive phases of the music of Rush work synergistically with Loss of Urge, your most reliable tool in pregnancy prevention. About 30 seconds into the melodic meandering and feral-cat-being-threatened-by-a-raccoon vocals, a woman will experience a complete and total shut down of her sex drive. At this point, her legs will snap shut with the spring tension of a bear trap, making intercourse all but impossible.

How do I take it?

During the time between menstruation and ovulation, hormones are beginning to build. You will start with a mild dose of the more accessible—albeit still irritating—tracks like “Tom Sawyer” and “The Spirit of Radio.”

The days around ovulation are when hormones peak. During this phase of your cycle, you will need to listen to the most baffling Rush selections. Mid-cycle, you’ll take any track in which a citizen of a hypothetical futuristic society discovers a banned quotidian object. In clinical trials, positive results were achieved with “Red Barchetta” and “2112: Discovery,” in which a car and a guitar are discovered respectively.

During the final phase of your cycle, you can lower your dose to include instrumental tracks like “YYZ” or shorter tracks with reduced synth and pretension like “Fly by Night.” Relax! You’ll get your period soon because you definitely didn’t get pregnant while listening to Rush.

Are there any side effects?

Common side effects include:

Some women report feeling incredibly uncool. You may develop medium-to-severe irritation when your male sexual partner gives an impassioned ten-minute speech on how Neil Peart was the greatest percussionist in human history.

Fans of Rush may tell you that women just can’t handle complicated time signatures and cerebral lyrics. This is a serious and irreversible side effect called “sexism.” Women who experience this adverse reaction should call their doctor, all of their friends, and then post the entire exchange on Twitter.

You have many options when it comes to birth control. Ask your doctor if the music of Rush is right for you.

Over on our Patreon page: An interview with author Leslie Ylinen about writing this piece and the response to it by Rush fans.