So I was visiting with a collector friend in Chicago the other day, and he was showing me a guestbook he used to be in the habit of keeping, and I was especially struck by a quick souvenir the artist Claes Oldenburg had left him during a visit back in 1977, to wit: 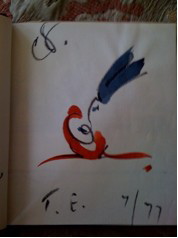 This would have been around the time that the great pop artist was rendering larger room-scaled versions of the theme as exuberant sculptures, such as one the collector himself owned: 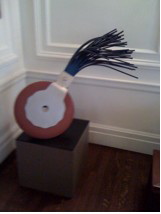 And others larger yet, designed for public outdoor spaces. Little comets of glee, such as this version, which appears to be crashing into the sculpture garden outside the National Gallery in Washington, D.C.: 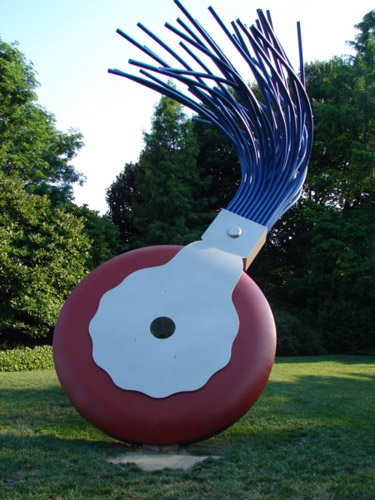 Anyway, that happy train of associations got me to thinking further. Because earlier this year I’d been reading about the young Robert Rauschenberg’s legendary encounter with the great Willem de Kooning. At that moment, in 1953, de Kooning (b. 1904), was, alongside Jackson Pollock (b. 1912), arguably the reigning master of the New York art scene, proponent of that spectacularly vigorous, existentially torqued, action painting style known as Abstract Expressionism. Not only a great, great painter, he was also one of the most accomplished and subtle draftsmen of all time. Protean creator of this sort of thing, from MOMA’s collection (1952):

Anyway, Rauschenberg (b. 1925) was fairly new in town, a generation younger than de Kooning, fresh out of Black Mountain College (where his teachers and fellow students had included the likes of Merce Cunningham, John Cage, Josef Albers, Buckminster Fuller, Jasper Johns, etc.). Unlike other younger artists in New York at the time (Resnick, Bluhm, Goldberg, Mitchell, and so forth), Rauschenberg, though an enormous admirer of de Kooning’s achievement, was himself declining to pursue the so-called Second Generation Abstract Expressionist path. Instead, for example, just around that time, he’d been executing a series of White Paintings, exclusively monochromatic works that eschewed emotionally expressionist gesture altogether, intent instead on exploring and celebrating the perceptual fundament under-guiding all expression, the positive active presence of that otherwise fugitive color, the way light itself for example played across such an emptied canvas. White paint on white canvas was one thing, however, but somewhere in there, Rauschenberg got it into his head that he wanted to follow such experiments into the terrain of drawing, another great passion of his, even though it was not altogether clear, initially, how one might go about doing such a thing. Presently he hit upon the idea of erasing drawings and began doing so, for starters, with drawings of his own, becoming increasingly entranced with the resultant trace, the look, as it were, of the gummy smudge.

The story has been told many times (see for example the accounts in Mark Stevens and Annalyn Swan’s Pulitzer Prize winning de Kooning biography, or else in the Modern Masters PBS Rauschenberg documentary, which is available on YouTube). Something about erasing his own drawings was failing fully to satisfy the young Rauschenberg (they looked too much, he felt, like erased Rauschenbergs, and as such, perhaps, not accomplished enough, or at any rate too self-referential, which was never the point) and presently he convinced himself that what he needed to be doing instead was to erase the work of a full fledged master; whereupon, screwing up his courage with a bottle of Jack Daniels, he ventured over to de Koonings’s studio and asked the revered master for a drawing, stammeringly explaining how he intended to erase it. Willem de Kooning, for his part, took the request entirely seriously, and following all sorts of excruciating mind games of his own, gave the young whippersnapper a page of densely worked imagery, scrawled over with all manner or crayon, pencil and ink.

What I’ve always savored at this point in the story is the evident comedy of misunderstanding: de Kooning clearly interpreted the request in active expressionist terms, as a laying down of the gauntlet in an epic generational battle. Just as he, de Kooning, had had to slay Picasso in order to clear space for himself, here coming up was this new generation, intent on engaging in its own Oedipal rebellion. Talk about existentialist passion! So he met the challenge head on, giving the boy a particularly densely worked page that would prove especially difficult, if not impossible, to erase. Whereas for Rauschenberg, the thing was (or so he was always to claim), Oedipal aspirations had nothing to do with it; nor even did the process of erasure, which in this instance was indeed to last several months; he insisted that he simply loved how the gummy erasure smears looked. 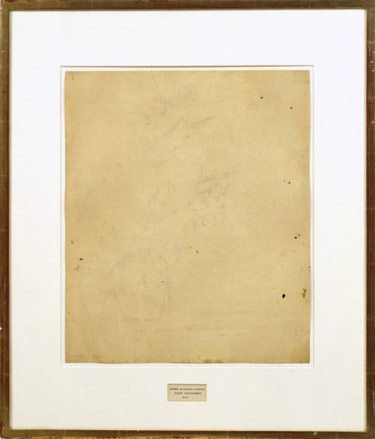 The way they reflected the room, for example, the Zen-like attention they invited and sustained. For him, they weren’t gestures of nihilist defiance; rather, they constituted a sort of “poetry.” (John Cage, for his part, credited Rauschenberg’s white on white experiments with giving him the courage, immediately thereafter, to begin pursuing his own extended evocations of silence.)

Anyway, all of this now came back to me, thinking about that Oldenburg drawing and its sculptural progeny. For here came an artist of the immediately subsequent generation (b. 1929), and surely part of what was going on was that in observing the de Kooning-Rauschenberg battle − the Old Man seized by the anguished Oedipal implications of the erasing gesture, and the Younger Man by the splendor of its look − he, in effect, the grandson, had taken to proclaiming: Forget the erasure, look at the Eraser! Look how beautiful it is!

So, anyway, I was thinking about all this, when my New Yorker arrived, featuring a first excerpt from the incomparable Ian Frazier’s forthcoming book of Siberian voyages. Wherein I stumbled upon the following paragraph:

Having read a lot about the end of Tsar Nicholas II and his family and servants, I wanted to see the place in Yekaterinburg where the event occurred. The gloomy quality of this quest depressed [Frazier’s guide] Sergei’s spirits, but he drove all over Yeaterinburg searching for the site nonetheless. Whenever he stopped and asked a pedestrian how to get to the house where Nicholas II was murdered, the reaction was a wince. Several people simply walked away. But eventually, after a lot of asking, Sergei found the location. It was on a low ridge at the end of town, above the railroad tracks and the Iset River. The house, known as the Ipatiev House, was no longer standing, and the basement where the actual killings happened had been filled in. I found the blankness of the place sinister and dizzying. It reminded me of an erasure done so determinedly that it had worn a hole through the page.

Which in turn set me to thinking a bit further about that legendary de Kooning/Rauschenberg encounter, for look again at the year: 1953. Height of the Cold War, and indeed the very year Stalin himself died. Stalin, that gruesome master of the political erasure, as subsequently documented by David King in his 1997 classic, The Commissar Vanishes:

A tyrant who became convinced that it wasn’t just necessary to eliminate one’s opponents: his own legitimacy resting, he became ever more obsessively certain, resting on his erasing all evidence that they had ever even existed at all. Culminating with Himself All Alone, triumphant, unchallenged and unchallengeable, supremely sovereign against a serene white on white backdrop.