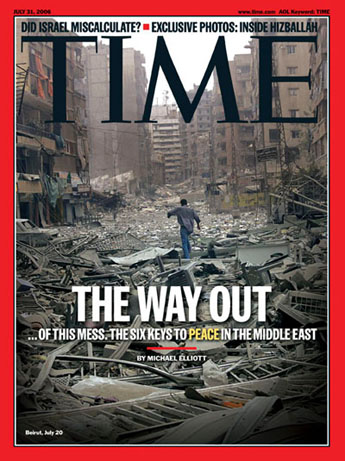 What to make of this disconcerting juxtaposition, last week’s cover of Time magazine, laying bare the agony of Beirut under Israeli bombardment, up against the poster for Roman Polanski’s film account of the improbable survival of a Warsaw Jew in an earlier city and country laid waste, in that case by the Nazis?

One might start by wondering whether the Polanski image wasn’t just so powerfully iconic that it all but manhandled the art directors at Time into choosing that Beiruti image over all the others that came across their desk that day for their cover.

Or, probing a bit deeper, one might go on to consider the unfortunately congruent geographical placement of the two countries involved, and the two sets of peoples—the Poles there on the low flat plains separating the Germans and the Russians (the Nazis and the Reds), and hence the site for their perennially recurrent battles and mayhem; and then Lebanon/Palestine/Israel, that little smidge of territory where Asia and Europe and Africa abut, narrow site for endless historic contestations, trade and blood and holy gore and glory unending.

Of course, though, these two particular twinned images raise a more disquieting echo as well. For how is it, one can’t help but wonder, that, given their own recent history (of all histories!), the Jews of Israel don’t simply recoil at the sense of themselves as furies raining unbridled destruction down on distant cities packed to the gills with panic-stricken civilian refugees, or, conversely, how is it that they (of all people!) can’t seem to empathize with the aching situation of a neighboring people crammed into sweltering and hopeless ghettos … etc. etc. etc.

I am by no means the first to marvel, somewhat despairingly, along such lines. Nor is the Middle East, cursed as it is, the only place where such sorts of painful conjunctions have played themselves out. One need only think of the Athenians and their seemingly outclassed polis, heroic victors nevertheless over the Persian Empire at Marathon and then again at Salamis (as celebrated in Herodotus’s thrilling accounts), who within a few generations, toward the end of the Peloponnesian War (as Thucydides relates, with conspicuous allusions to Herodotus), had turned themselves into a mighty empire, hellbent on conquest, lashing themselves into the presently catastrophic campaign against tiny, seemingly outclassed Syracuse. Or, more recently, of the United States itself, which was born of a mighty and inspiring war of independence against British colonialism, and which, less than 200 years later, couldn’t recognize similar longings for liberty and self-determination on the part of the Vietnamese.

Thucydides seems to imply there is something cracked and flawed in the transmission of hard-won wisdom between generations. Perhaps. Several years ago I had intended to go do a piece on a family-violence clinic in Israel: the sort of place where battering husbands in moments of wrackingly cathartic transformation come to terms with the way that they only batter because they were themselves so badly battered as children. Everyone nowadays just passes over that sort of construction as if it were obvious and self-evident, when in fact one might have expected just the opposite to be the case: that a battered child, of all people, would grow up to be someone who, precisely out of his own experience, would never ever batter in his turn. We realize, of course, that it is the former rather than the latter pattern which seems to recur, but the point is that it is by no means obvious and self-evident why it does so: there is a profound and disquieting mystery at the heart of all this. I’d meant to report such a story in the middle of Israel without ever widening my focus out of the clinic itself, though the wider metaphoric implications of the reporting could not have helped but bleed through.

Somehow never did get around to doing it, though last week’s cover of Time, with its Polanskian rhyme, brought the idea back to me, with a sad, sad vengeance.