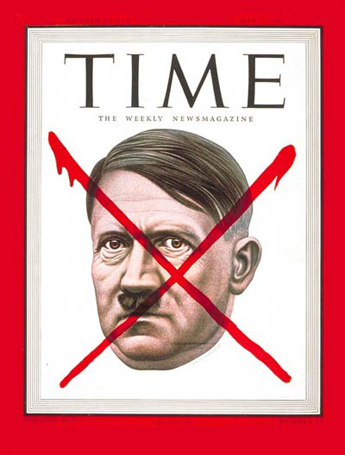 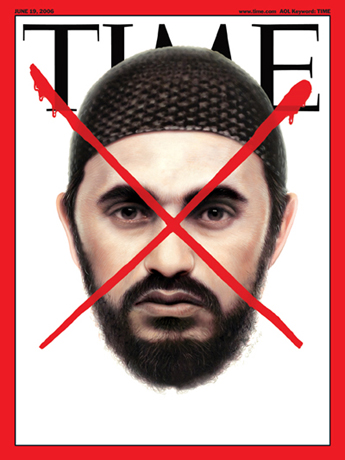 This convergence is not at all a subjective one—it’s a manufactured one, courtesy of the folks over at Time magazine’s cover-design department. The first image is the Time cover from May 7, 1945 (the death of Hitler); the second is that of June 19, 2006 (the death of al-Zarqawi).

The design of the more recent cover raises some interesting sets of questions:

1. Are they really comparing al-Zarqawi to Hitler? As nasty a character as he was, it seems like a bit of an overstatement to compare his death in terms of significance to that of the architect of the Holocaust, the man who sent the whole world to war. Plus, the death of Hitler, announced by the first cover, brought about Germany’s surrender and the end of the war in Europe. Is Time, therefore, declaring the war in Iraq over, and victory for al-Zarqawi’s opponents? Doesn’t seem likely.

2. For whom was the second cover designed? Hardly anyone alive today would remember the Hitler cover, so the “historical resonance” factor is virtually nil. Only unusually dedicated followers of Time covers (_Time_heads?) or Time employees—and even in that case only Time employees who have poked around the archives or who have made studies of past cover designs for their own work—would “get” this reference.

So it seems like an internal wink, then: a deliberate convergence by Time magazine for Time magazine. They would have had to wait this long, as anyone who remembered the first cover would also be pretty outraged at the comparison. It will be interesting to see who Time decides to X out 60 years from now.

Nice catch, Steve: you must be almost as geeky as I am to have noticed it.

But I agree with you completely about the odd misprison involved, though Time is by no means alone in such tinpot, tin-eared conflations. For indeed, it is as if the tin-soldier statesmen of the current era, from Bush through Rumsfeld through Blair, long to swath themselves in the mantles of the Golden Age Roosevelts and Marshalls and Churchills, huffing and puffing with all their might to cast their war of civilizations in a similar light. Though, as you so well point out, one among many, many crucial differences is that they don’t seem to be winning theirs. Which, alas, as you also point out, may still be coming as news to those behind that more recent cover.