Young Eli himself, the Master Magus presiding over all things McSweeneyian, deigns to join us this week in the Contest pit, pointing us here, suggesting that we, “Look at this: It’s not exactly a convergence, but it’s … something.”

And indeed it is. One really should explore the entire site, but even just a sampling of the deliciously daft creations proffered forth by the artist in question, one Ms. Ju Duoqi (born 1973 in Chongqing, a 1996 graduate of the Sichuan Fine Arts Institute, since then a website and computer game designer) will reveal the sheer over-the-top something-or-otherness of the project in question, “The Vegetable Museum,” as she terms it. To wit, for example: 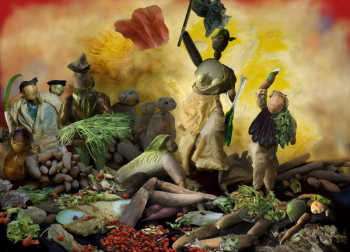 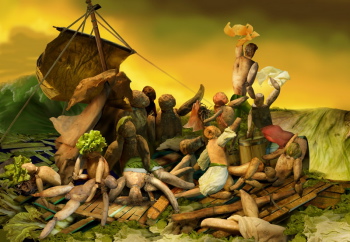 The Raft of the Lotus Roots 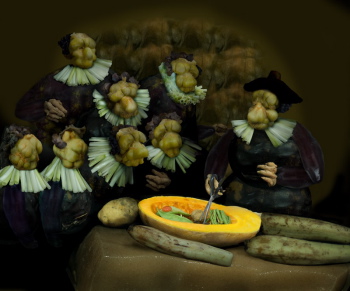 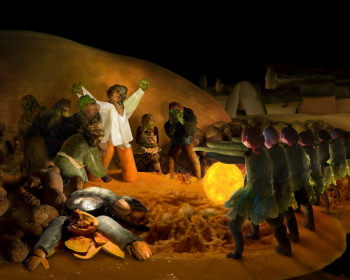 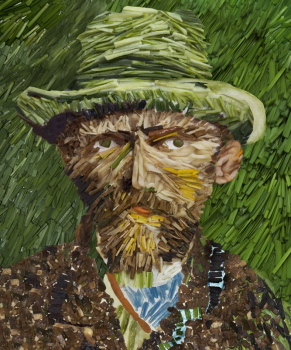 Van Gogh Made of Leek

Picasso with Onion and Noodles

Okay, well obviously the first association is to the corpus, as it were, of the divine Giuseppe Arcimboldo (ca. 1527-1593), master painter in the courts, successively, of the Hapsburg king Ferdinand I in Vienna, Maximilian II and his son Rudolph II in Prague, and Augustus of Saxony. His conventional work, mainly on religious subjects, has pretty much fallen into oblivion, but the stuff he was doing on the side … Well, you get the idea: 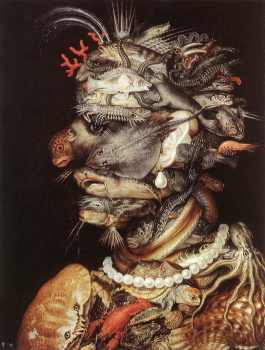 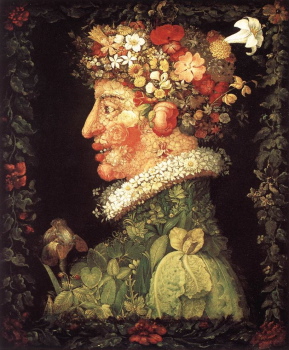 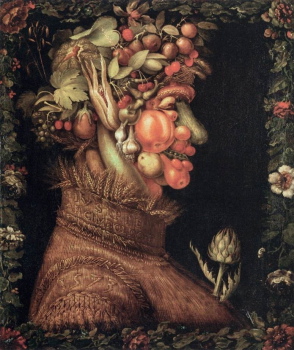 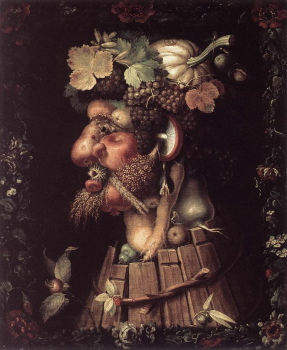 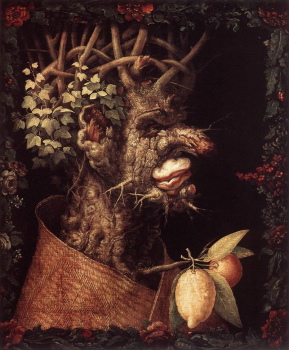 Souren Melikian focused his New York Times review of the big 2006-7 Arcimboldo retrospective at the Musée du Luxembourg in Paris on the question of whether Arcimboldo was himself quite mad or merely catered cannily to the madness of his times, “the passion for weirdness,” as Melikian delicately parses the matter, that engulfed “the Habsburg Court during the second half of the 16th century.” And I suppose one could ask a similar question of Ms. Ju. Though Melikian’s stark alternatives seem a bit pinched. Far be it from us here at the Contest, at any rate, to question the sanity of any other convergence-besotted artisans. Or their fans.

Somewhat more intriguing, in the case of Ms. Ju’s project, is the question of just how she does it. The Artist’s note that accompanies her web museum, cited above, suggests that she spends a lot of time in vegetable markets and then a lot more time back home in a sort of legume-and-toothpick frenzy. After which she photographs the results. A close look at those results, however, suggests that there may be a good deal of photoshopping involved as well. Or perhaps not. Hard to tell.

But that very question in turn leads us back to another earlier such instance, the case that is of Arcimboldo’s Spanish contemporary Juan Sánchez Cotán (1560-1627), who worked in a somewhat more traditional still-life style, as for instance in hauntingly balanced masterpieces like these: 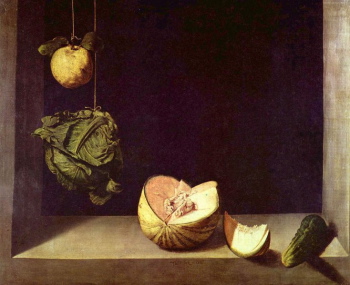 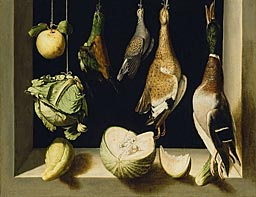 The thing that’s in turn interesting about Cotán, especially in the context of Ms. Ju and this question as to whether or not she is photoshopping, is that the Spanish master’s work has become a key instance in David Hockney’s argument that all sorts of Old Masters were effectively photoshopping, or at any rate splicing and dicing imagery with the aid of optical devices such as lenses, curved mirrors, prisms, and camera-obscura style holes in walls, long before the invention of chemical fixatives in 1839. (See Hockney’s 2001 book Secret Knowledge: Rediscovering the Lost Techniques of the Old Masters, pp. 106-7, and my own summary of same in my 2008 book of conversations with Hockney, True to Life, pp. 115-87). Hockney’s commentary on the two Cotán paintings above runs as follows:

Juan Sánchez Cotán painted this still life in 1602. The setting itself − a small window with a ledge − suggests our hole-in-the-wall technique, as does the lighting. How long would the cabbage look like that with such a strong light on it? How long would the cut melon stay like that without decaying? Not very long, that’s for sure, certainly not long enough for Cotán to have eyeballed it so precisely. Cotán’s is a beautiful painting with a lovely, satisfying, yet simple composition. The curve formed by the objects has been commented on before, and sometimes given a religious interpretation. But I would suggest that the objects are all on the same plane because of the depth-of-field problems I discussed and illustrated earlier. And now look at the second version of Cotán’s still life, also painted in 1602. The composition is identical except for the addition of game and the vegetable in the bottom-left corner. The quince, cabbage, melon and cucumber are all in exactly the same place as is the first version. Could Cotán have used his mirror-lens as an epidiascope to make this copy, as I think van Eyck had done with the portrait of Cardinal Albergati almost two centuries earlier?

And, as if to bring Hockney’s conjecture right up to the moment, all sorts of funny business begins to occur when you take to Google-image-surfing for Cotán images these days, because things like these keep cropping up: 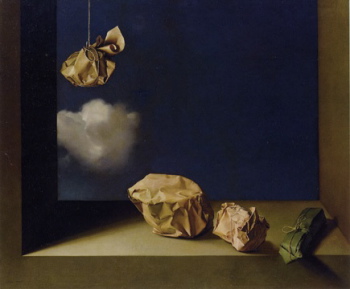 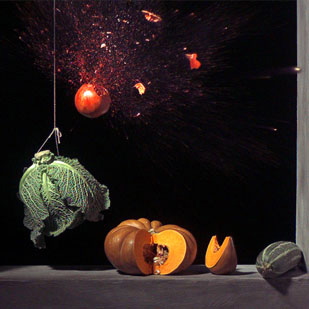 And perhaps most tellingly (or at any rate we suspect that this is what many of you usually start suspecting about us around this point in these postings), this one here: