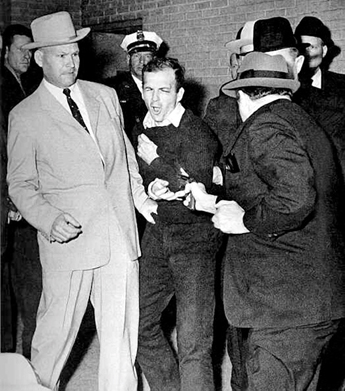 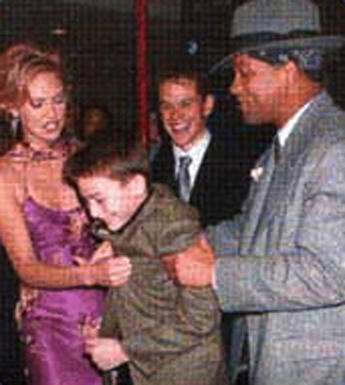 Sometimes it’s easy to think that, possibly for storage reasons, the events and activities in our lives employ a few tired templates that dictate all the action. Only the nouns change. And, sometimes, if you’re lucky, you can spot an old, familiar template in action. I think this is one of those cases.

I saw this a good while ago, in November of 2000, in an issue of Variety. It was a picture of the cast party for the movie The Legend of Bagger Vance, some boring-looking movie about golf. The picture shows Will Smith, Charlize Theron, Matt Damon, and J. Michael Moncrief (the kid). When I saw the image, something about it was so strikingly familiar; the actors, in all their cast-party horsing around, had unwittingly, I suppose, made themselves into a remarkably close tableau of the photo of Jack Ruby shooting Lee Harvey Oswald.

All the elements are there: at the center, the kid, doubled over in good-natured roughhousing, mirrors Oswald’s less-good-natured grimace as the bullet enters his torso; lovely Ms. Theron, while arguably more attractive than the sternly shocked-looking detective Jim Leavelle, has nevertheless managed to mirror the rearward cant of his stance perfectly. Will Smith, in his unconscious role as Jack Ruby, is even wearing what appears to be the same kind of fedora! And, as the icing on this tasty cake, a delighted Matt Damon looks on, echoing the less delighted looks of the police officers in the background.

I wonder if the photographer was aware of the similarities. After all, the original composition won a Pulitzer!

Weschler was left speechless (an impressive testament!) by this bizarre resemblance. Challenge: Someone (preferably someone who has actually seen the movie) give us the poem around this rhyme.