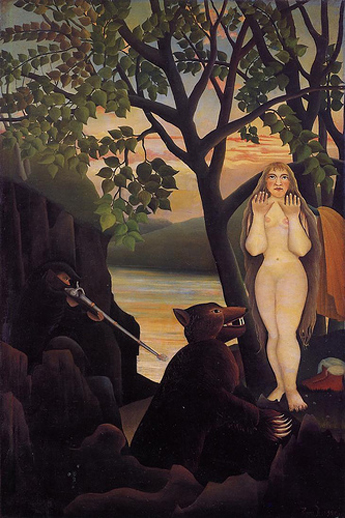 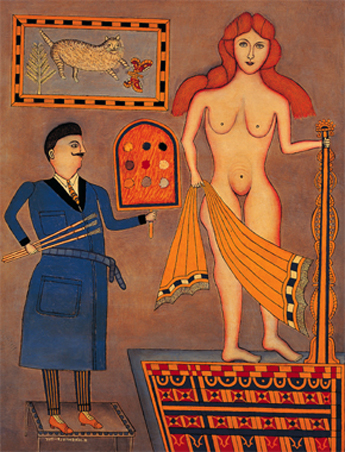 Morris Hirshfield, The Artist and His Model (1945)

Please let there be no narrative to explain Henri Rousseau’s perfectly insane Mauvaise Surprise, the forest scene of a blasé nude, a ferocious bear, and a hidden gunman. Nothing could do justice to such a bizarre image.

It’s a painting made all the more strange by its reflection in Morris Hirshfield’s The Artist and His Model. The women are undeniably similar. Both have stripped off their last piece of clothing (check the tree behind the nude in the Rousseau) and their faces are empty of any expression. Hirshfield paints himself into the bear’s place in his painting (both appear in profile), where, instead of claws, he holds up three long brushes.

For me, though, the convergence doesn’t end at the composition; I can’t find a hint of sexuality in either of these paintings. I don’t know why I expect a bear attack to be sexualized, but both images, especially side by side, seem that much stranger for their chastity.

Ah, Mr. Webb, did you ever meet Mr. Clem from back in Entry No. 5? I mean, because you guys have sorta the same problem, or else I do with you, because you are the ones who keep showing me the damn pictures …

But anyway, yes, there is a certain je n’ose pas kinship between these two images. But chaste? I’m not so sure, at least not with that really odd Hirschfield. I mean, what do you make of that bewhiskered pussycat in the picture-within-the-picture, toying lewdly like that with the prone butterfly (same color as the model’s hair); and the artist’s paddle palette; his rampant brushes; that really peculiar belt knot sashed over to his side; and the ornate long stick she is grasping? Granted, pace Freud, sometimes a cigar is only a cigar, but other times, something’s not being a pipe doesn’t necessarily mean it isn’t a peep.

Now, as for the Rousseau, bizarre, yes; perfectly insane, yes; without any possible narrative … Well, maybe no narrative, but hardly without antecedent. Does it render the image any less deliciously whacked out to see it as Rousseau’s take on the old St. George and the Dragon motif, as in, well, Raphael: 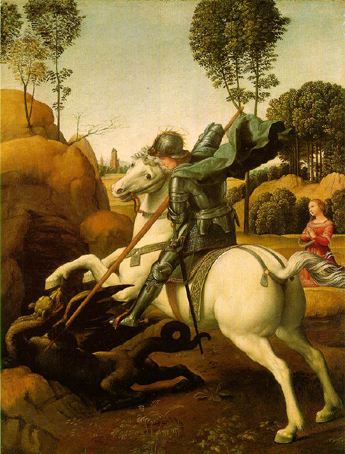 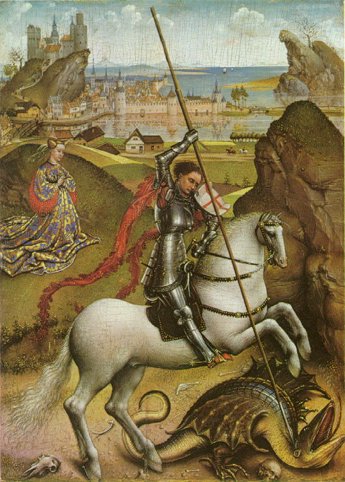 or, almost as wiggy as Rousseau, the divine Paolo Uccello: 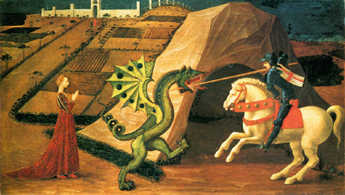 not just once, but twice … 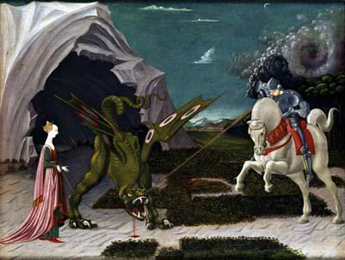