(Who submitted the below photo without further comment beyond the caption)

Logging trees in a Swedish forest, as seen from the air

So, we were thinking of leaving Mr. Rumsfeld’s entry up a bit longer, but I guess it turned out he just couldn’t stand the heat of the Contest. How else to account for his abrupt departure from office? Six days online and he’s gone!

Meanwhile, as for Mr. Murch’s entry: Are you kidding us? Is this for real? How can this be for real?

The tree photo is completely legit.

It was taken by a Swede named Jocke Berglund, and it won him a Wildlife Photographer of the Year award from London’s Natural History Museum, on whose site the following elucidation is offered:

When Hurricane Gudrun thundered across southern Sweden in January 2005, it left around 100,000 people isolated and without electricity. Deep snow, fallen trees and severe temperatures meant several people died before help could reach them. Flying over Småland photographing the devastation, Jocke—who specializes in aerial photography—saw this ‘remarkable oak tree print’. It was formed partly by the storm brush of nature and partly by the impact on the soil of the forestry machines retrieving logs. ’It’s as if the heavens had sent a message to the forest industry reminding them that, in this area, deciduous trees would have withstood the winds much better than pine. It’s also another stark reminder that global warming will lead to regular and stronger storm winds.’

Granted: not that elucidating.

But reminiscent of all sorts of imagery in the last section of Everything That Rises (“Trees, Neurons, Networks”); and, also, as with the Rumsfeld before it, strangely pertinent to the current mood in the wake of Tuesday’s elections: clear-cut and rebirth, the wider pattern amid the devastation, or some such. 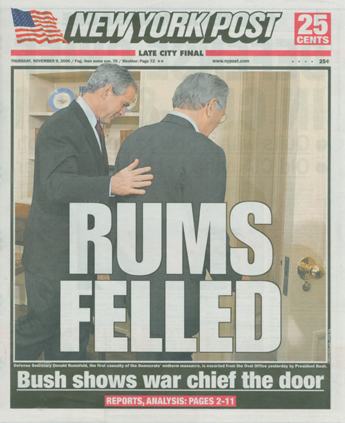 And then, beyond that, also reminiscent of a luminous parable of W.S. Merwin’s, his 1970 prose poem “Unchopping a Tree,” which begins, ever so self-evidently, “Start with the leaves,”—continuing—"the small twigs, and the nests that have been shaken, ripped or broken off by the fall; these must be gathered and attached once again to their respective places." And it goes on like that. (“It is not arduous work, unless major limbs have been smashed or mutilated … It goes without saying that if the tree was hollow in whole or in part, and contained old nests of birds or mammal or insect … the contents will have to be repaired where necessary, and reassembled, insofar as possible, in their original order, including the shells of nuts already opened.”) And so forth for paragraph after hallucinatory paragraph: every single leaf getting reattached, every single branch; tackle and scaffolding getting hauled in so as to facilitate the final reattachment of the reconstituted trunk to its stump, at which point the tackle and scaffolding start getting pulled away:

Finally the moment arrives when the last sustaining piece is removed and the tree stands again on its own. It is as though its weight for a moment stood on your heart. You listen for a thud of settlement, a warning creek deep in the intricate joinery. You cannot believe it will hold. How like something dreamed it is, standing there all by itself. How long will it stand there now? The first breeze that touches its dead leaves all seems to flow into your mouth. You are afraid the motion of the clouds will be enough to push it over. What more can you do? What more can you do?

But there is nothing more you can do.

Everything is going to have to be put back.

Everything put back indeed. A pretty good clarion call, come to think of it, for the next Congress.