Michele Siegel, an associate producer with Kurt Andersen’s nationally syndicated Studio 360 radio program, out of WNYC in New York City, caught the spirit of the Contest recently while gazing upon this year’s Pulitzer Prize–winning photograph, taken on the West Bank, by Oded Balilty of The Associated Press. As she wrote, in dispatching the following trill, “The photo’s composition immediately reminded me of great history paintings like the ones by Goya and Manet below (the stance of the uniformed legs perhaps even more than the brandished weapons).” 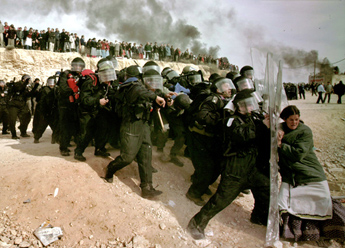 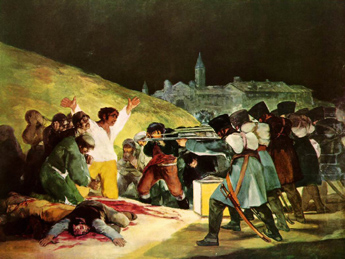 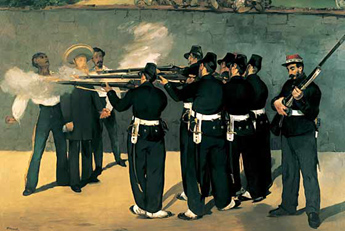 Yes, indeed, the virtually eternal trope of the Last Stand, the foredoomed assertion of defiance by that final solitary opponent ranged against all the armed might of the State, or at any rate the Powers That Be (think Antigone); and, yes, Ms. Siegel’s associations are quite compelling. (I especially like, as does she, the spread military legs rhyming between the Balilty and the Goya, and then as well the way the onlookers gaze down from on high in both the Balilty and the Manet.) One might add Picasso’s riff on the theme, The Korean Massacre, from 1951, as conspicuously indebted to the Manet as Manet’s had been to the Goya, and in this context perhaps even more resonant yet of themes broached in the Balilty photograph (the woman as victim; the soldiers ranged in their hypertrophied, near-medieval armature). 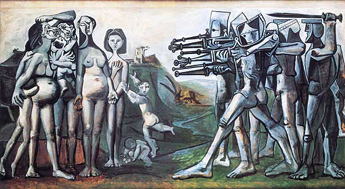 Or even more simply—stripped to the theme’s ur-essence—consider the legendary image of that lone man facing down all those tanks in Tiananmen Square: 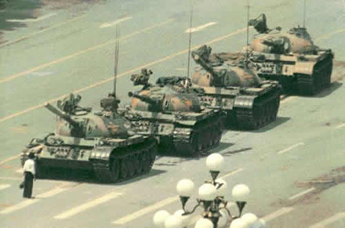 Of course, our sympathies invariably seem to align with the lone opponent in such imagery, as they naturally do with the Palestinian woman in the photograph that launched this whole particular discussion. But, wait a second, not so fast. Yes, we are outside Ramallah, and that is the Israeli Army charging down in force, but look at the phrasing on the original Pulitzer Prize citation, praising this “powerful photograph of a lone Jewish woman defying Israeli security forces as they remove illegal settlers in the West Bank.”

As someone recently remarked (was it Susan Sontag in her last book?), photographs (or, for that matter, paintings?) can never be political in and of themselves. What makes them political—the thing that activates their political meaning—is the captions. Or, at any rate, the context. Goya’s painting bears the long title The Third of May, 1808: The Execution of the Defenders of Madrid, and that title certainly clarifies Goya’s stance: the day before, on May 2, 1808, Napoleon’s forces had stormed the recalcitrant Spanish capital, and May 3 famously saw the execution of over 5,000 of the capital’s defenders. Goya’s sympathies are so pronounced that he casts the man in the white shirt with his arms extended, as if in crucifixion, with those around him crumpling into all sorts of classic crucifixion-scene-like poses. (Of course, it might have been possible to impose a different narrative entirely onto the scene, with a sort of proto-neocon Napoleon trying to force the values of the Enlightenment down onto an otherwise benighted Iberian Peninsula, still mired as it was, and would now long remain, in the bleak values of its own Inquisition.)

Manet’s sympathies are somewhat more difficult to read; nor does the painting’s title particularly clarify things: The Execution of Emperor Maximilian of Mexico. (In fact, Manet composed four versions of the painting between 1867 and 1869, perhaps struggling to clarify things for himself.) For one thing, though the French master conspicuously alludes to Goya’s painting of only 60 years earlier (about as far back for him as the flag-raisers at Iwo Jima are for us), the nationalities and the ranks of the protagonists (as Manet doubtless realized) are in fact precisely reversed. In the Goya, Napoleon’s French imperialist executioners target indigenous Spanish victims, whereas in the Manet, Mexican republican insurgents execute a French imperialist proxy monarch, recently half-assedly imposed (and then, just as quickly, half-heartedly abandoned) by the hapless French sovereign, Napoleon’s own monumentally inept nephew, Napoleon III. (“The first time as tragedy, the second as farce,” as Karl Marx intoned, in a different context, regarding this selfsame emperor.) But where exactly did Manet stand in all this, and what did it mean for him to quote Goya in this manner? Manet’s is a cooler outrage, and though he too seems to draw on the iconography of crucifixion (Maximilian haloed in his sombrero between his two generals), the outrage seems aimed more at the Parisian author of the entire fiasco than, say, at the Mexican insurgents (Manet, after all, considered himself a republican, too).

Which in turn brings us back to Odad Balilty’s Pulitzer Prize–winning image. How are allegiances meant to be flowing here? (And how might they read differently if the caption explained that the woman was indeed, say, a Palestinian matron, merely trying to protect her olive groves from yet another Israeli confiscation?) Does it help, for example, to know that, according to his Web bio, “Balilty, born in 1979 in Jerusalem, where he is currently based, learned the basics of photojournalism as a photographer for the magazine of the Israeli Defense Forces.” Not really, for amid the tortured knots within knots into which so much of Israel’s current politics have now descended, one can imagine such a photographer feeling a certain sympathy with both his former colleagues in the military and their lone woman antagonist (Antigone-ist?), stubbornly atavistic though her own motivations may be. (Or not: Many Israelis have had it up to here with the Settlers.) (One is reminded of the recent Onion headline “Middle East Conflict Intensifies as Blah Blah, Etc. Etc.”) Perhaps Balilty’s allegiances are simply to the image itself, this image that suddenly came swimming into his viewfinder, albeit preceded, as Ms. Siegel was the first to point out, by its own train of prior instances.

The point is that, as usual with these Convergences, the initial likeness often only proves the beginning of a mad, slapdash race of further associations.

P.S. A few days after I’d composed the foregoing response, a full half-page version of the following image, a direct quote (as it were) of the Tiananmen Square photo, appeared in a fundraising ad for the Israeli Committee Against House Demolitions-USA (ICAHD-USA), under the headline “Who Will Stop This Bulldozer From Destroying the Chance for Peace?” Actually, not a direct quote (the woman ranged against the full power of the state is not entirely alone, but the man in front of her seems to fade from view, so accustomed are we to the orthodox pose). This trope just keeps on recurring, as, alas, do the dead-end political situations it so vividly captures. 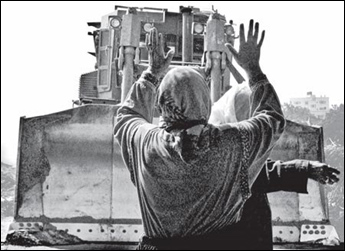