My family and I recently went to a cosmology lecture titled “View From the Center of the Universe” in Chicago, where they showed an amazing video entitled Mapping the Universe with the Sloan Digital Sky Survey. The video showed how a consortium of scientists put together photographs of 565,175 individual galaxies and 76,403 quasars in their real places in space to create a sort of expanding 3D model of the universe. At the end, the frame slowly moves out to show the universe as a whole. 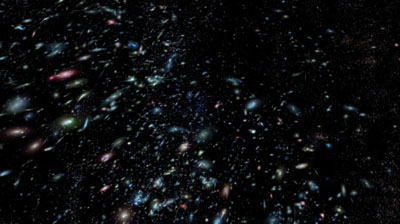 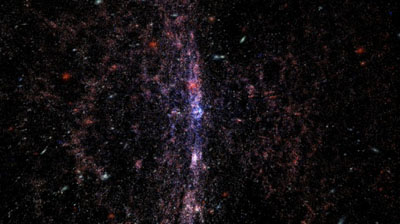 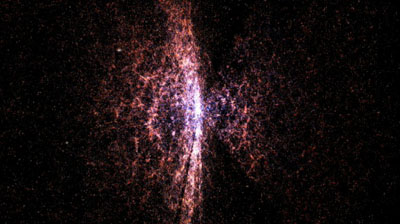 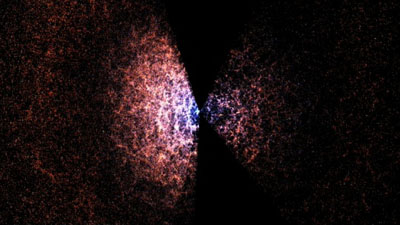 And it occurred to me that the shape of the universe as shown in the video, with its distinct form, seemed to replicate the way light is said to enter the eye, the sort of thing [Lawrence Weschler] talks about in the last chapters of Everything that Rises, as well as in that Lee Friedlander posting from a few months back.

Which was strange enough as is. (What’s that about, do you think?)

But then, a few days later, I came across an image online with this caption: 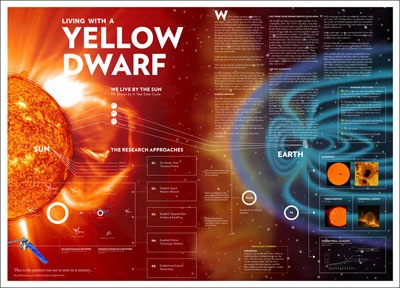 "NASA’s Hubble Space Telescope has taken the first visible-light snapshot of a planet circling another star in this image released by NASA November 13, 2008. Estimated to be no more than three times Jupiter’s mass, the planet, called Fomalhaut b, orbits the bright southern star Fomalhaut, located 25 light-years away in the constellation Piscis Australis, or the “Southern Fish.”

Looking at the photo, I was amazed by how much it resembled a human eye. It seems to suggest the pupil, the iris, even the whites! What to make of that?

(A little bongy at that, also considering the last image in another recent posting of ours.)

My first guess, with regard to that first ( >< ) effect anyway, was to surmise that somehow the earth itself was acting like a cosmic eyeball, or like that eyeball’s retina, or maybe like the hole in the wall of a camera obscura… Granted I couldn’t quite visualize how that might be working.

But then, that’s what the Contest keeps its own Mr. Spock on hand for, in the person of regular contributor Michael Benson, progenitor of that amazing volume Beyond on the photographic legacy of the interplanetary space probes, from a few seasons back, and its forthcoming sequel, Far Out: A Space Time Chronicle, based on all sorts of Hubble type intergalactic imagery. And here’s what he had to say:

The “X” effect apparently at the center of all Space and Time is not real but due to the Zone of Avoidance—the parts of the universe blocked by the gas and dust of the Milky Way. In effect what we are seeing with that sphere is a terra-centric view of the cosmos, with Earth at the center of the X, and our view of Everything blocked along the plane of our own galaxy.

As it happens, the eye effect in the other image (and specifically the pupil area) is also caused in part by areas where data has been blocked, in this case by the agency of the sun shield device (in Hubble) being used to observe. The only way to “read” the dust and debris of this proplyd is to block the light of its central star, which would otherwise overwhelm it. The reason for the eye shape of the exterior ring of debris is because we are seeing the system not flat on but at a three quarters angle (or so). Otherwise it would be circular. However there is no doubt that there is an eye-like quality to the image, and imagine it with a bright flaring proto-star at the center…(!). Talk about fire in your eye…

Back online, I was able to track down an annotated version of the same image, confirming Spock Benson’s surmise with regard to what in the diagram gets called a “Coronagraph mask”: 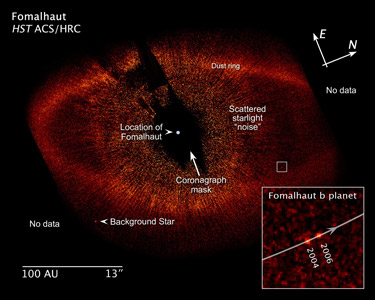 All of that in turn got me to thinking about the history of such astronomic/optic misprisions. The famous instance, for example, of Percival Lowell, the billionaire businessman and astronomical enthusiast (1855-1916) who financed the construction of the observatory that bears his name near Flagstaff, Arizona, in part so as to facilitate his own passionate investigations into the intricate system of canals he was convinced he could make out on the surface of Mars. He produced a dazzling series of drawings of said canals, which only much later were revealed, in all likelihood, to be projections of his own oculus fundus—the tracery of veins, that is, spread across the concave interior surface of the very eye which he’d been pressing into the darkened barrel of his telescope. 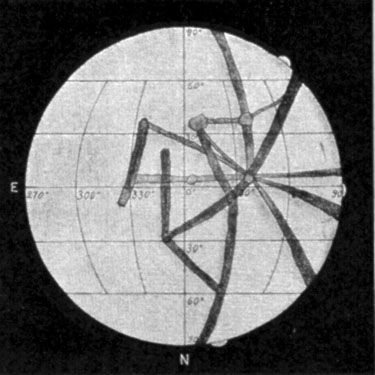 The sort of image we have seen before in this contest, to wit: 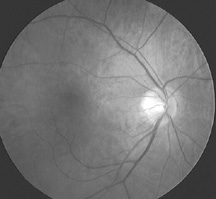 In effect, by stopping down his telescope so severely, Lowell had been turning it into an ophthalmoscope!

Some more recent artists have been playing with this sort of thing more self consciously. For example, take a look at some recent work by the photographer Genevieve Hanson, in which she took to tooling around the rural back roads of Minnesota, Wisconsin, Maine and New York, scanning the horizon for empty, often abandoned, grain silos. Upon finding them, she’d approach the owners, asking if she could photograph them from the inside, whereupon, permission granted, she’d wedge her way into the rickety structures and train the barrel of her Vietnam era 4 X 5 Toyo Super Graphic camera up into the vault of the empty silo, producing such uncanny images as these: 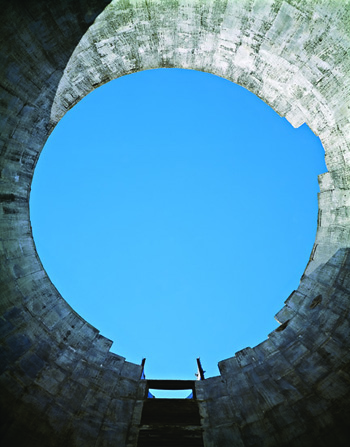 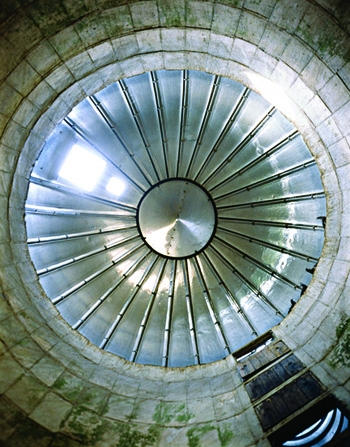 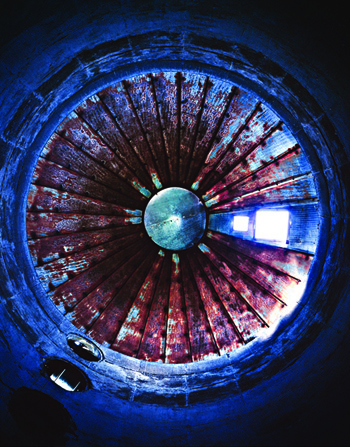 Another artist who, it seems to me, has been playing with the way that the gazing eye invariably zeroes in on other eyes out there in the world, is of course Chuck Close, especially in his more recent work, as in this sort of thing, a self portrait: 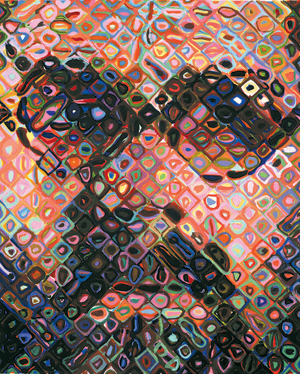 What I find so fascinating about these recent portraits of Close’s is the way the entire face is made up, as it were, of a veritable hive of eyeball-like ovoids, and yet somehow we read the face’s actual eyeballs as distinctly more eyeball-like. I’m not at all sure how, though it seems to me to be part of what these pictures are about.

Returning to Shélan’s original examples, one is struck by the way we don’t seem to be able to help ourselves: gazing into the heavens, we feel in some primordial sense as if we are being gazed back at. To some extent, this may be an instance of that old saw to the effect that God created Man in his own image, whereupon Man turned around and returned the favor.

Bracketing the question of God, the subject of the gaze has been an especially rich one, philosophically speaking, over the past seventy or so years, particularly in discourses growing out of Husserl’s phenomenology, and more specifically out of Sartre’s existentialist formulations in Being and Nothingness.1 Sartre suggests that as human beings we only become aware of ourselves, as such (as opposed to as free-ranging consciousness), when we sense ourselves being perceived by, which is to say falling under the gaze of, another. (For Sartre, this in turn can be a fairly alienating moment, precisely robbing us of our freedom as a subject: “Insofar as I am the object of values which come to qualify me without my being able to act on this qualification or even to know it, I am enslaved.”) Merleau-Ponty likewise has some terrific stuff on the embodiment of perception in his Eye and Mind and The Phenomenology of Perception. And for Lacan, the gaze becomes the medium for self-differentiation, as when a child first individuates his ego when confronted by his mirror image.

Gazing up into the skies, we are Children of the Universe. How can we help but mirror ourselves?

Of course, Nietzsche, for his part, in Beyond Good and Evil, suggests how “If thou gaze long into an abyss, the abyss will also gaze into thee.”

fn1. For a nice online prècis of some of this discourse, see Jennifer Reinhardt’s entry at http://cmst.uchicago.edu/glossary2004/gaze.htm